Former Italian Prime Minister Enrico Letta meets with DW's Manuela Kasper-Claridge during the Ambrosetti Forum to talk about zero growth in the Italian economy, European integration and his prescriptions for the future. 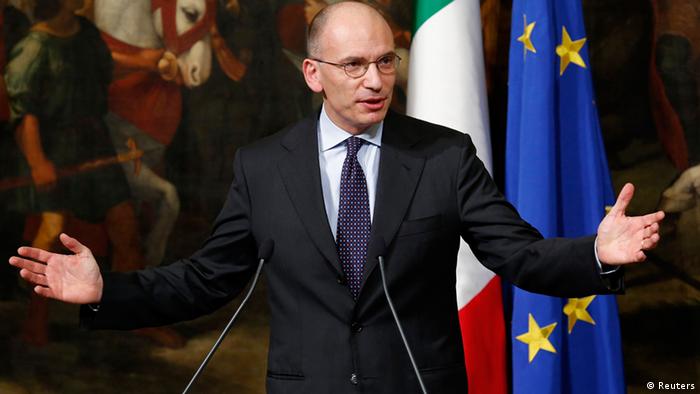 DW: The outlook for the Italian economy doesn't seem to be so promising, what is your assessment?

Enrico Letta: I think there are many things to be concerned about today, not only in terms of the economy but also the political instability and the uncertainties surrounding the constitutional referendum that we are having in Italy in November. Furthermore, there is the migrant crisis, which is severely affecting Italy again because after the closing of the Balkan route, the migration has shifted towards the central Mediterranean route. And then there is the big news about the zero growth we have had in Italy during this past quarter. So overall there are many things to be concerned about but I think that Italy has skills and assets and opportunities to recover from this. But we have to work harder.

DW: But when you say we have to work harder, what should be done?

DW: You mentioned the refugee crisis, which is affecting Italy a lot. At the same time, Europe has a lot of problems right now, too. Is Europe leaving Italy alone with its problems a bit?

DW: You know, the problem is not the fact that one country is left alone in one period or another. Take Germany, for instance: A few months ago, when Germany welcomed hundreds of thousands of refugees and the rest of Europe didn't do their part, Germans felt left alone as well.

The problem is more fundamental than that. I don't see the European Union having a clear approach to dealing with the migrant problem. We continue to work step by step, dealing with one problem after another without developing a strategic approach. We have to create a sort of toolbox for the migrant crisis, as we did for the Euro-crisis. For the Euro-crisis we changed our treaties, we created the ESM and we need that kind of approach for the migrant crisis as well. We need some treaty changes, the harmonization of the rules pertaining to refugees, a coast guard and border patrol at the European level, measures like that.

DW: So do you have the feeling that the European idea is no longer as popular as it once was?

EL: Absolutely. People are less enthusiastic about Europe and the consequence is that their leaders, the politicians, think that they have to be less enthusiastic too, so they can get votes. And that means there will be less European integration. You know, there are many areas where there are no national answers. Issues like the fight against terrorism or the management of the flows of migration. They are separate issues but what they have in common is that we need European solutions for both. If you don't have European answers, you don't have effective answers, just political fighting. And that is why today, populist parties are polling so well. There are no clear solutions to the problems affecting the people and the citizens respond to that.

DW: Are you worried about upcoming elections in other European countries like France where the results could be even worse than before?

EL: France and Germany will have elections next year, probably Spain too. So we are entering a period in which, if you add the Italian referendum, you will have 12 months where politicians in the four big countries of the Euro-area will have to answer to their voters for their policies.

But if we continue to think that we have to wait until after the election at the national level before doing something, we will always be waiting and that is something we cannot afford to do because, frankly, I don't think the European problems can wait for twelve months. We are already in a process of disintegration, so if we have to wait until after the Italian referendum, the Spanish elections, French elections and German elections in September 2017, my fear is that there will no longer be a Europe in September 2017.

DW: Prime minister Renzi mentioned that the Brexit could also be an opportunity for Europe and for the economies in Europe. Do you share that view?

EL: I think he said correctly that we were all against the Brexit. But as Theresa May said: Brexit means Brexit, so the UK cannot remain onboard and we have to renegotiate the relationship between the European Union and the UK. It is an opportunity in the sense that it lets us rethink and relaunch the EU with 27 members and also especially with the 19 members of the Eurozone. In Latin we say: "ex malo bonum" or "good out of evil." The Brexit is a very bad thing but now we have to take this opportunity for a relaunch.

Enrico Letta was prime minister of Italy from 2013-14 and is currently the dean of the Paris School of International Affairs (PSIA) at Sciences Po in Paris.