It's one of the world's most famous paintings – da Vinci's "Mona Lisa." Yet the iconic image and the enigmatic smile continue to mystify people to this day. Who was the subject?

The painting entices millions of visitors to Paris' Louvre Museum every year. With his "Mona Lisa," Leonardo da Vinci created more than just a painting of a woman. She appears lost in reverie, yet squinting at the same time, and all the while her gaze follows the viewer. She bears no eyebrows nor lashes. Her clothing is simple and dark, as though she were grieving. But why is she smiling?

It's not just the image itself that continues to mystify. Art historians still agonize over the woman's origins.

Read more: Is there another woman behind Mona Lisa?

Biographer Giorgio Vasari's theory is the most widely recognized. According to him, da Vinci was commissioned with a portrait of Lisa del Giocondo by her husband, Florentine silk trader Francesco del Giocondo, in 1503.

Yet chronologist Antonio de Beatis, writing in 1517, observed that Leonardo da Vinci had stated that the painting was commissioned by Giuliano de' Medici. Beatis is said to have been present when da Vinci received a visit by Cardinal Luigi d'Aragona to his studio in Amboise, France, on October 10, 1517. Beatis was the Cardinal's personal secretary at the time and d'Aragona himself was a close friend of Giuliano de' Medici, da Vinci's patron. 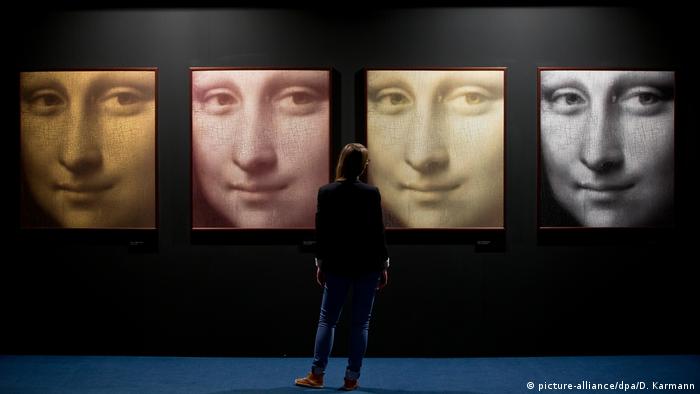 Mona Lisa's image has been copied countless times. Perhaps in an attempt to unravel the mystery?

According to Beatis' notes, da Vinci showed the Cardinal three different paintings: "St. John the Baptist," that of "St. Anne" ("The Virgin and Child with Saint Anne") and a portrait of "a certain Florentine woman, done from life, at the instance of the late Magnificent Giuliano de' Medici."

The notes lead to the implication that da Vinci painted an envisioned portrait of Pacifica Brandani, de' Medici's mistress, with whom he had an illegitimate son. Since Pacifica Brandani died during the birth of the child, the portrait was perhaps intended to offer comfort to the young child.

Both theories are advocated by various art historians, yet no one can say for sure who Mona Lisa truly was. What is a fact is that the painting meant so much to da Vinci that he never sold it and took it with him to France in 1516. It wasn't until upon his death in 1519 that it is believed that assistant and pupil Salai inherited the painting and sold it to French King Francis I. From there, it ultimately ended up in the Louvre's collection.

The date of the first public showing of "La Joconde," as the "Mona Lisa" is called in French, also remains uncertain. According to the Prussian Cultural Heritage Foundation, October 10, 1517 is the actual date – precisely 500 years ago.

The many faces of the Mona Lisa

Masterpieces revisited: How well do we really know them?

From Mona Lisa to the Kiss - how well do you really know the world's greatest artistic masterpieces? (10.08.2015)

Historians say they may have uncovered traces of one of the art world's greatest mysteries: a long-lost masterpiece by Leonardo Da Vinci. (12.03.2012)