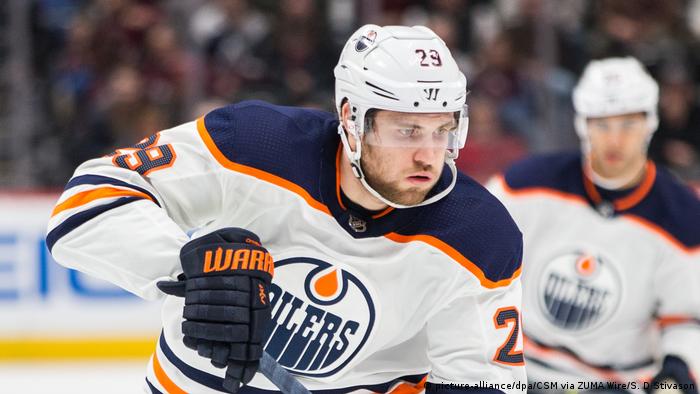 The façade of Rogers Place in downtown Edmonton has the air of an ice hockey museum. Along a stretch of around 50 meters (164 feet) you will find depicted the key protagonists behind the Edmonton Oilers' golden era. The biggest name, of course, is Wayne Gretzky, "The Great One," followed by legendary coach Glen Sather and fellow superstars Jari Kurri, Paul Coffey and Mark Messier. Between 1984 and 1990 the Oilers won five Stanley Cups, putting the city of Edmonton on the map, far beyond North America.

That's a long time ago; the Oilers haven't won the Cup since 1990 and they haven't been to the finals since 2006. But management, players and the fans hope that the long wait for another Cup won't be much longer. One of the people trying to deliver that wish is the Leon Draisaitl, whom the Oilers picked No. 3 overall in the 2014 NHL Entry Draft.  The son of former German national team player Peter Draisaitl now plays on Edmonton's first line, alongside generational talent Connor McDavid.

McDavid, who hails from the Greater Toronto Area, is 15 months younger than his German teammate, but he is already so good that he has been dubbed "McJesus" by some fans. The Canadian and his German linemate are so in sync that some say you could turn the lights off in Rogers Place and their passes would still be consistently on each other's stick. On this evening in Edmonton, the Colorado Avalanche were their latest victims, in a 6-2 defeat. McDavid had three goals and three assists for a six-point night, while Draisaitl chipped in five assists. So it was no surprise, that as so often is the case the two were the focus of the media in the post-game dressing room interviews.

"We've been playing together for years, we always know where each other is on the ice," Draisaitl said.

A few stalls down from Draisaitl's, McDavid said it was fun to play with "Leo." Draisaitl countered that he wouldn't want to be the opponent when McDavid is as on his game as he was this night.

Looking around the crowd in Rogers Place there was no question that McDavid is the fans' real favorite, with at least three quarters of those wearing jerseys having his 97 on their back.  But statistically, Draisaitl is currently better, he's the league's top scorer with 41 points and the top goal scorer with 15. 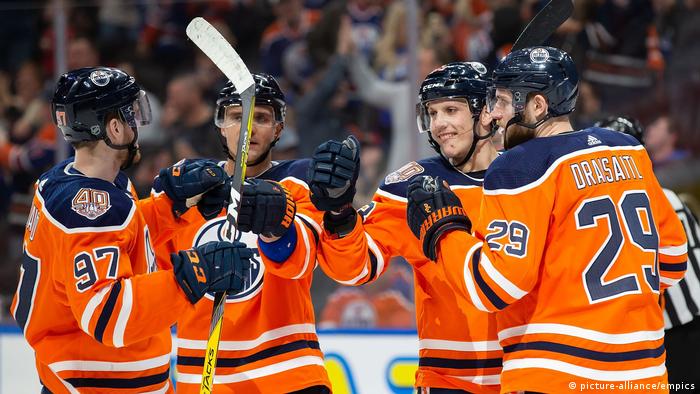 Draisaitl with a unique record

If there was an award for the most valuable player of the first quarter of the season, Draisaitl would be one of the contenders, says Bob Stauffer. He's the host of Oilers Now on Edmonton radio station 630 CHED. Speaking to him is like speaking to a walking, talking Edmonton Oilers encyclopedia.

Last season, the Cologne native finished second in the league in goal scoring in the regular season with 50. No other German had ever come close to the 50-goal plateau. The previous record for a German in a single season was 29, which Draisaitl had shared with Marco Sturm. Draisaitl's 105 points in 2018-19 were good enough for fourth place on the scorers' list. This season Draisaitl is on track to improve upon these numbers: So is this his year to win the scoring title, or become the league's top goal scorer?

"Sure, that would be nice," he says. "No question about it. What athlete wouldn't like to win trophies like that?" he asks.

Still, he is much more focused on the success of his team - starting with Edmonton making the playoffs. 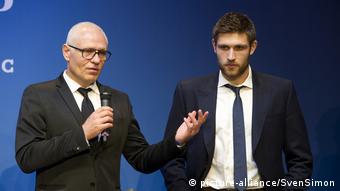 This is why, after their win over Colorado, he prefers to talk about the Oilers, who are now in third place in the overall standings, rather than his five assists.

"The two points are important to me- for the team, everything else is a bonus," Draisaitl says.

Apart from that he talks about how well they performed as a team and how clinical they were in front of goal. His down-to-earth attitude, in addition to his talent, is one of the characteristics that make Leon Draisaitl who he is. He's one of the biggest stars in his chosen sport, yet he appears to be caught off guard when asked what he thinks when he looks at the list of top scorers in the NHL. It's an indication of how he was brought up - to always keep both feet firmly on the ground. So what does father Peter make of his already much more famous son's season so far?

Calder Trophy winner Moritz Seider: NHL rookie of the year made in Germany 22.06.2022