Leningrad: The city that refused to starve in WWII | Europe | News and current affairs from around the continent | DW | 08.09.2016

Leningrad: The city that refused to starve in WWII

It was Leningrad, not Stalingrad that was the Eastern Front's real World War II humanitarian disaster. Nazi Germany sent hundreds of thousands of civilians to their deaths through starvation and hypothermia. 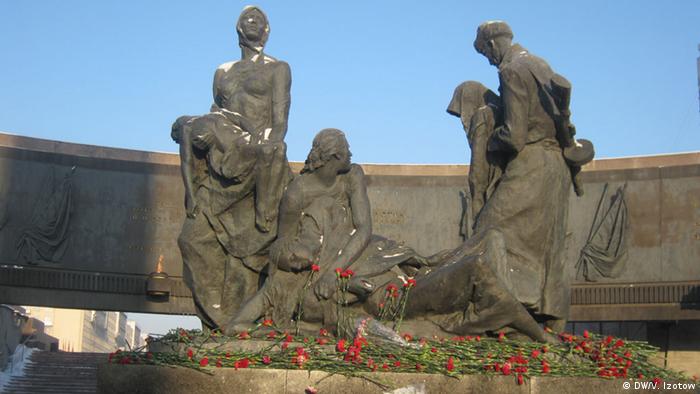 At first, the dogs and cats disappeared. Then there were no birds anymore. They were eaten. It was done out of pure desperation, in order to survive and not go crazy. The menu in Leningrad during this period of the war included wallpaper, window putty and soup made of boiled leather. The commemoration of the 70th anniversary of the beginning of the blockade was held two years ago at the German Parliament. A survivor, the Russian author Daniil Granin, described the almost unthinkable: "A child died - he was just 3 years old. His mother laid the body inside the double-glazed window and sliced off a piece of him every day to feed her second child, a daughter. This is how she got her, though." 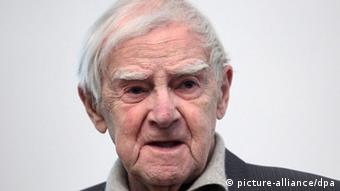 Cannibalism was not uncommon during the almost-900-day siege. The numbers vary between 1,000 and 2,000 cases. But eating people led to prompt executions. No appeals were allowed.

Leningrad, now restored to its earlier name of St. Petersburg, suffered a uniquely horrific fate in the years between 1941 and 1944. The city, which lies at the mouth of the river Neva had around 2.5 million inhabitants at the beginning of the blockade. Among these were about 400,000 children. During the 871 days of the siege about 1.1 million civilians died. Most of them starved to death. Historians describe the fate of Leningrad as the largest unprecedented demographic disaster in a city.

The siege lasted from September 8, 1941, until January 27, 1944. When it ended, people crowded onto the streets or listened to the radio. It was the longest blockade of a city in the twentieth century. During the summer of 1941 the 500,000 strong German army troop "North", under the command of General Field Marshall Wilhelm Ritter von Leeb, advanced on the city. His orders were to wipe out the Red Army in the Baltic States, to capture all naval bases on the Baltic Sea and to conquer Leningrad by the July 21. In fact, the last railway connection linking Leningrad to the outside world did not fall into German hands until August 30. The city was encircled from September 8. The citizens of Leningrad were far from prepared for this. 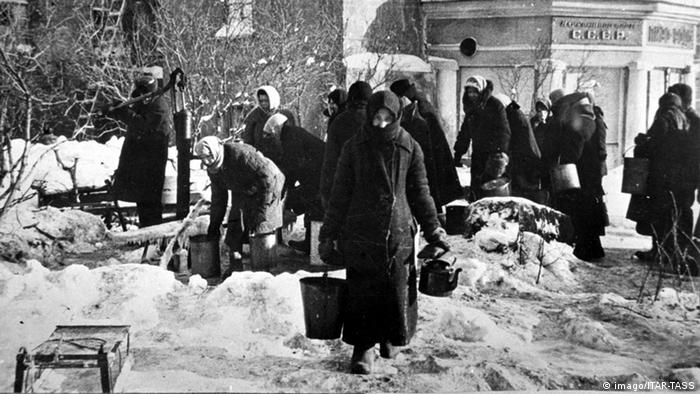 January 13, 1942: Citizens going through the procedure of fetching water for 'leather soup.'

It was Adolf Hitler, who had originally wanted to capture the city and raze it to the ground, who ordered the troops to stop. Rather than suffer heavy losses through street battles, he ordered a siege of the second largest Soviet city. This angered the German soldiers. Hitler's propaganda minister, Joseph Goebbels, recorded in his diary: "The troops are shouting as one 'we want to march forward!'"

The historian Jörg Ganzenmüller, from the city of Jena, said the starvation of Leningrad's people was necessary to guarantee that there were enough supplies for the German army. It was only possible to support the army by letting the people starve. From the summer of 1941, there were already supply problems for the Wehrmacht. The troops were supposed to be fed by the captured territories. Large cities were no longer to receive supplies. According to Ganzenmüller the original plan to destroy the city turned into a strategy to besiege it and in the end to wipe out the entire population.

The people of Leningrad were particularly unprepared for the first winter of the war. There was only one opening out of the encircled city, which was across the frozen Lake Ladoga. The legendary ice road was officially called "Military Road No.101." But it was commonly just called the Street of Life. This dangerous route, which was under German fire, was the only way people could be evacuated and most importantly, supplies brought into the city. Yet far too few supplies got through.

Mass starvation had already begun by October 1941. Bread was stretched by mixing in bran and cellulose. Ration cards were handed out. Workers were allowed 250 grams of bread per day, all others were allowed half of this. Weakened people lived in freezing apartments together with their dead. First the furniture was burned, in the end, the books. It was only from 1943 that the starvation ended. Then unlimited bread was available again.

But, even during the pure struggle for survival, the people of Leningrad showed great fortitude. In the first winter of the siege about 2,500 students graduated from university. There were theatre performances, the museums were open and in the summer of 1942 Dmitri Schostakowitsch premiered his seventh symphony. The composer had written the work only the previous year, in the middle of the city under German fire.

For a long time in historical studies, the Leningrad siege was regarded as a "normal military operation," according to Manfred Sapper, editor-in-chief of the German journal Osteuropa. The British historian Anna Reid said that for many years the level of suffering of the population was suppressed because the perpetrators were fathers and grandfathers who had been on the Eastern Front. In her book on the siege, she writes that: "It is easier to remember these relatives as suffering from frostbite, going hungry or doing forced labor in prison camps rather than to imagine that they burned down villages, stole winter clothes and food from farmers and helped to round up and shoot Jewish people."

For many years the siege of Leningrad was overshadowed in German consciousness by the events of the Battle of Stalingrad. Ganzenmüller believes this is due to the particularly high number of German casualties in Stalingrad. The crimes of the Wehrmacht were almost completely ignored until the 1980s, says the historian. According to Peter Jahn, the former director of the German-Russian museum in Berlin-Karlshorst, "there is a huge act of suppression involved in not wanting to record yet another huge crime of the century in our collective memory."

Daniil Granin, the author and survivor of the 871-day siege, spoke in the Bundestag in 2014 on the anniversary of the end of the blockade. He said that for a long time he was unable to forgive the Germans for waiting for the city to surrender. He found it dishonorable that instead of sending in soldiers they sent hunger.

The Siege of Leningrad: Russia Remembers