Lebanon was once known as the Switzerland of the Orient. But that was a long time ago. Today, many Lebanese are struggling to survive in an increasingly difficult economic environment. 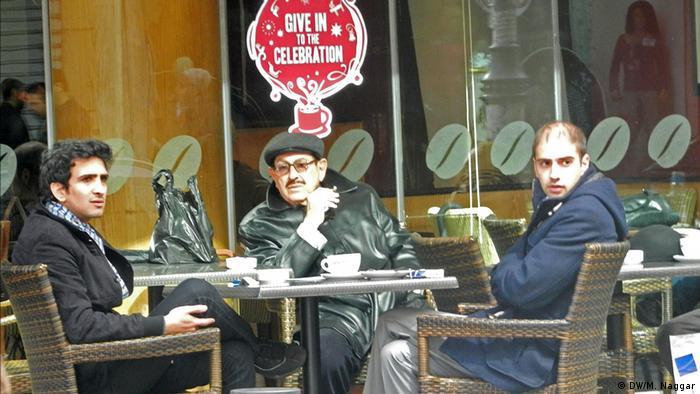 Ghina Harb is married and has three children. One son attends the private American University of Beirut, the other two go to private schools. The family has two cars and lives in a spacious apartment in Beirut. Ghina said the family requires at least $3,000 (2,300 euros) per month in order to maintain this lifestyle. But the Harbs are lucky. They don't have to pay any rent because Ghina's parents gave them their apartment several years ago. In addition, they don't have to deal with medical care. All family members are covered through her husband's health insurance plan.

"So we can afford to go out to dinner with our children once or twice a month to a restaurant," the 41-year-old Ghina said. "Back when we still paid rent, it was difficult to make ends meet."

Ghina comes from an old Beirut family. Her father, a grocer, has provided security for her and her family by giving them the apartment. Ghina said that the education costs for the children swallow up the majority of her husband's income, but that she could not complain about their standard of living. The Harbs are typical representatives of Lebanon's middle class. A recent survey published by the Lebanese Center for Policy Studies (LCPS) showed that 27 percent of the respondents said they earned enough to cover their expenditures without facing any major difficulties.

A growing struggle for the middle class 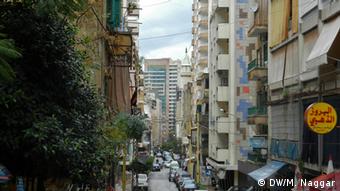 The rents in Beirut's Hamra district have exploded

There are no precise statistics on the distribution of income in Lebanon. However, the largest group facing difficulties in making ends meet is the lower middle class. Some 40 percent of those surveyed by the LCPS said they faced problems in covering their spending needs compared to a mere 3.7 percent who said they could cover their costs and even save.

A growing number of people have to struggle to maintain their previous standard of living, Ghina said. "Some of my friends have retreated and don't accept any more invitations, so that they don't need to buy presents." Others, she said, have gone into debt in order to continue financing the lives they are accustomed to.

It hasn't always been like this. Lebanon has for the past 30 years seen a continuously dwindling middle class. Estimates reckon that in the 1970s between 50 and 60 percent of the population belonged to society's midst.

This development is not surprising for economists. Mounir Rached from the Lebanese Economic Association said a key reason is that people's average income did not rise during the civil war from 1975-1990, or thereafter. The living costs, however, have increased. The starting salary of a university graduate in engineering is currently around $800, he said.

"It is impossible to make ends meet in Lebanon today on this," Rached said. "This means that young professionals start way at the bottom of the income scale and require many years to earn $2,000 at some point." In addition, there are not enough jobs for the young generation, he said.

A growing exodus by young Lebanese 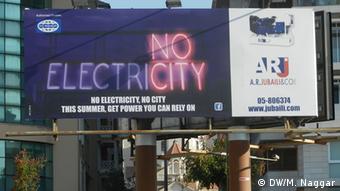 A billboard describes the sorry state of infrastructure in Lebanon: "No Electricity"

It's no wonder then that many well-educated young Lebanese emigrate. According to the LCPS survey, 53 percent of under-30 year olds are considering looking for a job abroad. In the age group 30-45 years, this figure is nearly 48 percent. Emigration is predominantly a phenomenon of the middle class.

Ghina Harb presumes her eldest son will most likely pack his bags and leave the country after he finishes university. He intends to apply to some Lebanese companies, but has little hope of getting a job in his home country.

The prognosis for Lebanon's middle class is grim. Economist Rached said this segment will shrink year by year. Neither the current nor previous governments have taken steps to counteract this development, he said. Jobs needed to be created, income and productivity increased.

"This is only possible if reforms are initiated and problems are solved," Rached said. The main priorities are new labor laws, better infrastructure and eliminating bureaucracy, while taxes also have to be more fairly distributed. The Lebanese state finances itself mainly through indirect taxes, such as sales tax or the tax on fuel. "This mainly burdens those who earn less," he said. "The wealthy are not affected by this."

The number of Syrian refugees, mostly women and children, is climbing. Lebanese and international organizations provide help, but they are reaching the limits of their capacities. (10.11.2012)

After the deadly attack on Lebanese security chief al-Hassan it was mostly Sunni Muslims who took to the streets in Beirut. What is behind the tensions? Why is the country repeatedly rocked by violence? (25.10.2012)