Banks, schools and government offices were closed the day after deadly clashes in Beirut, which are being considered the country's worst sectarian violence in a decade. 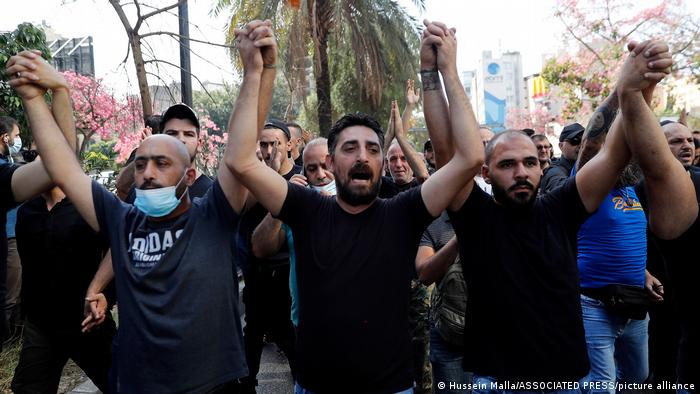 A day after sectarian clashes erupted in central Beirut, Lebanon's presidency declared a day of mourning. Banks, schools and government offices were closed, and Lebanese Army armored personnel carriers patrolled the streets. Barbed wire festooned the entrance to some areas one day after seven Shiite Muslims were killed.

The Hezbollah and Amal Shiite movements turned their attention to burying victims in cemeteries around Beirut. At a cemetery in a southern suburb, the Associated Press reported Hezbollah members in military uniforms paid their respects, standing before three coffins draped with the group's yellow flag and covered with white roses.

In Beirut's Tayouneh area, where the gun battles erupted, residents Friday were sweeping up broken glass in front of stores and apartment buildings.

The state-run National News Agency has reported that 19 people have been arrested by police so far in connection with the clashes, which are considered Lebanese's worst sectarian violence in a decade.

What sparked the violence?

On Thursday morning, Shiite demonstrators, many armed, were called to the streets by Hezbollah and Amal to protest Tarek Bitar, the judge who is leading the inquiry into the August 4, 2020, port blast.

More than 200 people died and thousands were injured in the blast, which was caused by improperly stored fertilizer set off by a blaze of unknown cause. The explosion leveled entire sections of Beirut. Judge Bitar had charged and issued arrest warrants for Lebanon's former ministers of finance and public works in connection with the blast, both close allies of Hezbollah.

Hezbollah leader Hassan Nasrallah had railed against Bitar in a televised address Monday before sending his supporters to the streets in protest Thursday.

It is unclear who fired the first shot, but gun battles erupted, with automatic machine gun fire ringing for hours through the streets. There were also reports of rocket-propelled grenades having been fired.

The scenes revived memories of Lebanon's brutal civil war, which lasted from 1975 until 1990, and constituted Lebanon's worst sectarian violence in more than a decade.

Bitar faces an uphill battle in his investigation, despite being considered by those who are fed up with the corruption of Lebanon's political elite as a chance to achieve lasting justice and political change.

Lebanon has a long history of political assassinations, and Bitar's effort to subpoena powerful figures, including two former Amal ministers, have gone ignored.

In addition to the profound architectural and psychological damage caused by the Beirut port blast, Lebanon is also struggling under the weight of one of the world's worst economic crises and the ensuing capital flight that has ensued.

Countries including France, the US and Russia, as well as the UN, appealed for calm after the day of violence.

French Foreign Ministry spokeswoman Anne-Claire Legendre told reporters during her daily briefing Friday that "France calls for calm on all sides concerned. The priority now must go to implementing the urgent and necessary reforms to enable Lebanon to emerge from the crisis, especially in the energy sector."

The US Department of State issued similar appeals after Thursday's clashes. Russia said it was "extremely concerned" and called for "restraint."

Lina Khatib, director of the Middle East and North Africa Program at Chatham House, said: "Lebanon's ruling establishment will use yesterday's instability to frame the investigation as doing more harm than good."

With reporting from Dario Sabaghi in Beirut

Lebanon’s economy teetering on the brink of disaster