The leak of thousands of confidential e-mails from members of Germany's far-right National Democratic Party shows the group is soaked in racist and neo-Nazi ideology. 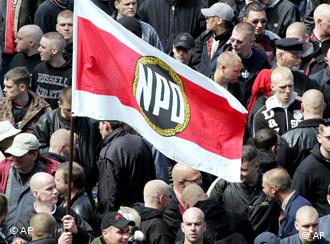 Thousands of leaked private e-mails have embarrassed the German far-right National Democratic Party (NPD). The data, which were leaked to several German media organizations, reveal some of the inner workings of the xenophobic, nationalist fringe party.

One example of the prevalence of neo-Nazi ideology among party members was revealed in their use of the code "88" - popular among neo-Nazis as an abbreviation of the Nazi-era slogan "Heil Hitler." "H" is the eighth letter of the alphabet and "88" is taken to stand for "HH."

The e-mails also reveal extensive infighting around the recent merger of the NPD with the like-minded German People's Union (DVU).

The leaked correspondence, made up of some 60,000 e-mails, reveals a strong adherence to neo-Nazi ideology and betrays the party's attempts to present itself as a more moderate political group on the right wooing voters disgruntled with the country's main conservative Christian Democrats.

Besides being a public-relations disaster for a party already viewed with extreme suspicion by most of the population, the data release could have legal consequences for the party.

The e-mails from end of 2010 to early 2011 suggest that the election campaign in the state of Saxony-Anhalt have partly been paid for by NPD money from the neighboring state of Saxony.

Such cross-state financing with party funds is illegal.

The NPD has said it will file a criminal complaint about the leaked e-mails. It is, however, unclear who was behind the release.

The anti-immigration party is considered the political arm of the neo-Nazi movement in Germany. It is often involved in far-right extremist marches.

The attempt by the party to give itself a more mainstream image is aimed at cracking the crucial five percent threshold that any party must attain to be represented in local or federal parliaments. The fringe group has no federal-level representation, but seats in two of Germany's 16 state parliaments.

Police on Tuesday raided homes of suspected right-wing extremists in four German states. They seized propaganda in the homes of some former members of a group that was outlawed in 2009. (21.12.2010)

Like many religions, Germany encourages its citizens to go forth and multiply. A family's seventh child automatically gets a bonus godfather - the German president. But what happens when the family has extremist views? (02.12.2010)