League of German Expellees Unwilling to Investigate Own Past | Germany | News and in-depth reporting from Berlin and beyond | DW | 14.08.2006

League of German Expellees Unwilling to Investigate Own Past

A controversial exhibition about displaced people during and after World War II has prompted calls for an organization devoted to German expellees to examine its own ranks for members who may have had links to the Nazis. 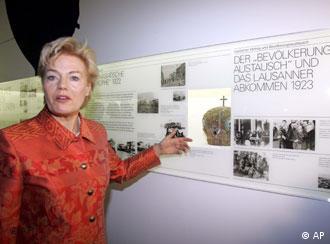 Erika Steinbach: An investigation would cost money that the league doesn't have

The exhibition "Paths Unchosen," which focuses on the plight of World War II-era displaced people, has been open for less than a week, but the organization that helped fund the exhibition through donations has already come under fire in the German media for its unwillingness to afford the same level of scrutiny to its own history.

The League of German Expellees (BdV), which was actively involved in raising money for the "Paths Unchosen," is being challenged to investigate its own past for members who may have had links to or been directly involved with the Nazi party.

The organization has never conducted such an internal investigation, and in its current edition, the German news weekly Der Spiegel suggests this is because it would prefer to avoid the uncomfortable truth that many former Nazis were part of its leadership.

The BdV is a federation that represents 12 to 14 million ethnic Germans and their descendants who were forced from their homes in Poland and Eastern Europe after the war.

The league's critics accuse it of devoting undue attention to the suffering of German expellees whose fates, they say, were the direct consequence of the atrocities committed by the Nazis. 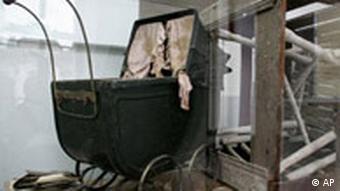 The exhibition documents the fates of many groups of expellees, not just Germans

The magazine reported that a glimpse into the archives of the BdV reveals that, in the first three decades of the BdV's existence, many more ex-Nazis were active in the organization than previously thought.

"Of almost 200 high-ranking members of the BdV…in the years prior to 1982, more than a third can be found in the members' index of the NSDAP or are in another way tainted," Der Spiegel wrote. "Three former general secretaries and several vice-presidents are affected."

The very first president of the BdV, Hans Krüger, was forced to resign from his post in 1964 due to his Nazi past.

In an interview with the magazine, the current head of the BdV, Erika Steinbach, said that simply counting the number of members who were associated in some way with the Nazis did not say much.

"You have to differentiate whether someone just went along with the Nazis or whether they really carried out a role that would be insupportable for an organization," she said.

When the magazine said making this distinction would be the point of an internal investigation, Steinbach added while it would surely be "interesting," such an investigation would "cost money that we don't have."

"If I had the feeling that there was a bomb waiting to go off underneath the surface, then I would have taken action long ago," she said. "But I don't have the impression that the expellees have a greater number of (Nazi) perpetrators in their ranks than the rest of the nation."

The Polish press generally responded with indignation, tempered with some degree of understanding, to the controversial Berlin exhibit on people expelled from their homes after World War II. (Aug. 11, 2006)

Organized by the conservative German League of Expellees, a controversial exhibition highlighting forced migration, displacement and genocide in Europe in the 20th century opens its doors in Berlin Thursday. (Aug. 11, 2006)

A controversial exhibition which opened in Berlin Thursday on the expulsions of Germans and other Europeans after 1945 has been strongly condemned by Polish leaders. (Aug. 11, 2006)