Berlin Exhibition on Postwar Expulsions Opens Amid Protests | Europe | News and current affairs from around the continent | DW | 11.08.2006

A controversial exhibition which opened in Berlin Thursday on the expulsions of Germans and other Europeans after 1945 has been strongly condemned by Polish leaders. 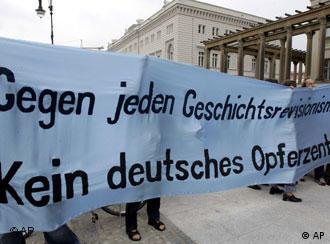 Speaking to reporters at the site of the former Nazi concentration camp Stutthof, in present-day northwestern Poland, Polish Prime Minister Jaroslaw Kaczynski called the exhibition "a bad, worrying and sad event" and said: "it is not doing anything positive for Poland, Germany or Europe."

The exhibition called "Paths Unchosen" is organized by the Center Against Expulsions -- a body that is closely linked to the League of German Expellees who represent some 12.5 million Germans who were kicked out from eastern parts of the defeated Third Reich after World War II.

The League, led by Erika Steinbach, a member of Germany's ruling Christian Democratic Party, has stirred anger with plans to set up a permanent expellees' center in Berlin. In recent years, the League has changed its tone, insisting that the center would not only focus on the plight of Germans, but have a European outlook.

Poland's conservative government and many Poles however believe the organization aims to portray Germans as victims of a war they started.

Nazi Germany invaded Poland in September 1939. After Germany's defeat, Poland's borders were redrawn and shifted west and many Germans were forced to flee. Thousands died on the trek from Poland, Hungary and what was then Czechoslovakia.

At the same time, Poles from the east of the country were uprooted from land which became part of the Soviet Union. 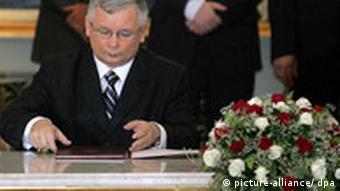 Jaroslaw Kaczynski has condemned the exhibition

Kaczynski said the exhibition was an attempt to rewrite history and realized fears in the run-up to the show that it would be seen by Germany's eastern neighbors as a bid to obscure the Nazis' role in World War II and the mass displacement that followed.

"It's an attempt to relativize the history of World War II," he said. "It's important to remember who the murderers were and who the victims," he said.

The planned project of setting up a permanent center for expellees' in Berlin remains a sticking point between Germany and its neighbors, Poland and the Czech Republic. Though the project is bitterly opposed by some German politicians, including former Chancellor Gerhard Schröder, current leader Angela Merkel and her party are in favor of it. 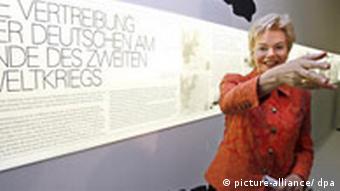 In an address marking the opening of the exhibition on Thursday, Erika Steinbach said the show was meant to commemorate all the victims of forced expulsion in Europe, not just Germans.

The exhibition gives space to the suffering not only of Germans but of people throughout the continent who were displaced by conflict, including in Poland, the Balkans and Armenia.

At the same time Steinbach said criticism of the project needed to be taken seriously.

"I think it’s necessary for Germans to be aware of these fears and worries," Steinbach said. "There is a need to deal with our history in its entirety, and we are trying to explain it and put the various facets into their proper context," she said.

"And who would deny that the large-scale expulsion of Germans after the Second World War is part of our history? After all almost a quarter of the German population was affected by it, so you can’t really ignore it." 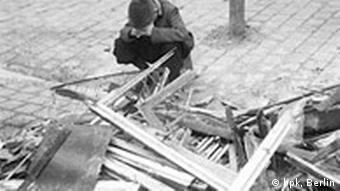 A photograph displayed at the exhibition

"The individual exhibits on various episodes in European history were put together with the help of foreign historians, including scholars from Poland," Rogasch said. He added that criticism from eastern Europeans who haven't even seen the exhibition simply isn't fair.

But not everyone is convinced.

"It is very dangerous to try to reduce the World War Two history to the problem of expulsions without mentioning the murder of Poles and the Holocaust," Poland's Deputy Foreign Minister Pawel Kowal told Polish news agency PAP.

"Poland is clearly saying 'no' to such attempts (to set up a permanent centre)."

Though the exhibition opened Thursday without any untoward incident, a group of demonstrators held up placards opposite the show venue, reading "Against every revisionism of history." The extreme nationalist Polish Youth group also staged a demonstration.

Social Democrat lawmaker Markus Meckel said that it would have been wiser to carry out such a project in consultation with other European countries, notably Germany's eastern neighbors.

Organized by the conservative German League of Expellees, a controversial exhibition highlighting forced migration, displacement and genocide in Europe in the 20th century opens its doors in Berlin Thursday. (Aug. 10, 2008)

A proposed Berlin center against war-time expulsions remains a hot-button issue between Germans and Poles: While Warsaw rejects the plan, Germany's likely next government is split on the issue. (Oct. 27, 2006)

A controversial center aiming to acknowledge the postwar plight of German expellees could be closer to reality since Angela Merkel took over the chancellery. (Dec. 15, 2006)

An exhibition on postwar expulsions opens in Berlin