Organized by the conservative German League of Expellees, a controversial exhibition highlighting forced migration, displacement and genocide in Europe in the 20th century opens its doors in Berlin Thursday. 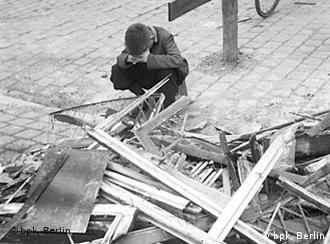 Called "Paths Unchosen," the exhibition in the stately Kronprinzenpalais, which served as a state palace under the Prussians, in downtown Berlin documents the fates of millions of war refugees in Europe in the 20th century. Exhibits range from memorabilia, photographs, books, maps, video footage, eye-witness accounts and historical texts.

The show stresses the unprepared nature of flights and arbitrary expulsions in the form of an array of battered suitcases, packed boxes and packages containing possessions hastily put together. 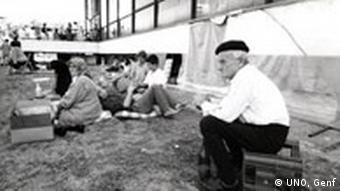 Refugees in Croatia in 1992

Personal items include a yellowed photograph showing an old man squatting forlornly amid a background of bullet-riddled walls and waiting to be transported to a refugee camp in Croatia, an exquisite violin made in a Russian camp, a tiny child's glove, a big key belonging to the Maria church in Danzig (present-day Gdansk), traditional garb and dirndls and a metal locker from a refugee camp decorated with a rustic floral pattern.

The curators traveled all over Europe to collect the exhibits. Some are on loan from other museums, while others belong to the ancestors of war refugees.

The curators say they don't want to create a treasure chest full of kitschy items, but rather capture the chaos, upheaval and turbulent transition of the time.

"This is no museum for folklore. It's about broken biographies," Kathrina Klotz, one of the curators, told German daily Süddeutsche Zeitung.

An uncritical comparison of suffering? 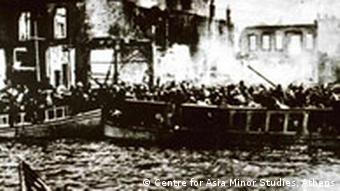 Refugees crowd boats as Smyrna is burning in 1922

Focusing on the suffering and loss caused by the Nazis, the exhibits touch on, among others, the massacre of Armenians under the Ottoman Empire in 1915, the expulsion of Christian Greeks from the city of Smyrna (today called Izmir) in 1922, the deportation of Poles and Italians, Muslims from former Yugoslavia, Jews from Vienna and the expulsion of an estimated 12 million Germans from countries in eastern Europe at the end of World War II.

It's the latter in particular that lies at the heart of the controversy surrounding the exhibition.

Though the expulsion of millions of Germans from their homelands in present-day Eastern Europe is a well-documented historical fact and the current show is backed by strong and independent research, many remain skeptical of the exhibition's concept.

Critics accuse the organizers, the Centre Against
Expulsions -- a body closely linked to the League of German
Expellees (BdV) which is in favor of setting up a controversial European center for expulsions in Berlin, of an uncritical comparison of Germans' plight with those of others who suffered under the Nazis.

An echo of misplaced nationalism 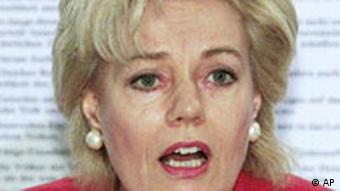 For years, the BdV's plans to establish the controversial center has been viewed with anger and deep suspicion not just within left-wing circles in Germany but also by Germany's neighbors, Poland and the Czech Republic -- where most of the German expulsions took place.

They see an echo of misplaced nationalism in the planned center and object to its location in Berlin, the former capital of the Third Reich.

The BdV's consistent emphasis on German suffering at the end of the war has also prompted accusations in Poland and the Czech Republic that the group is downplaying the Nazi conquest that prompted the postwar expulsions in the first place. Critics say the group is unilaterally highlighting German suffering, putting it on a par with that of Jews and other Polish civilians.

Some 12 million Germans were displaced, deported or expelled from countries in eastern and central Europe at the end of World II during the advance of Russia's Red Army, according to the BdV. An estimated three million died during the expulsions.

Referring to the tense mood in Poland regarding the BdV's plans, Gesine Schwan, the German government's coordinator for German-Polish relations, told Deutsche Welle that things weren't just black and white.

"In this case the Germans were the perpetrators and the Poles the victims, and perpetrators have the tendency to blame victims for what happened to themselves," said Schwan, the president of Viadrina University in Frankfurt (Oder) near the Polish border and a former candidate for the German presidency.

However, Erika Steinbach, a deeply controversial German politician and director of the BdV insists that the exhibition is committed to cover the plight of all European refugees.

"If you think in terms of human rights, then the fate of each individual and the dignity of each person must be preserved," Steinbach told Deutsche Welle. "And in the end, it was collective punishment that drastically violated international law."

Klotz, one of the curators of the show, also stressed that the exhibition was meant in no way to disproportionately highlight German suffering.

"For us the most important thing is to contextualize the expulsion of Germans," Klotz told German daily Süddeutsche Zeitung. "We want to show that it is no way unique."

The exhibition runs until the end of October.

A controversial center aiming to acknowledge the postwar plight of German expellees could be closer to reality since Angela Merkel took over the chancellery. (Dec. 15, 2005)

Controversial plans to build a memorial center in Berlin to the millions of people forced to move during and after World War II are well advanced, the head of a German expellee association said. (Aug. 1, 2005)

A proposed Berlin center against war-time expulsions remains a hot-button issue between Germans and Poles: While Warsaw rejects the plan, Germany's likely next government is split on the issue. (Oct. 27, 2005)