World leaders meeting in Vienna have announced new measures to bring an end to the war in Syria. The announcement came as the world reels from the brutal terrorist attacks in Paris overnight. 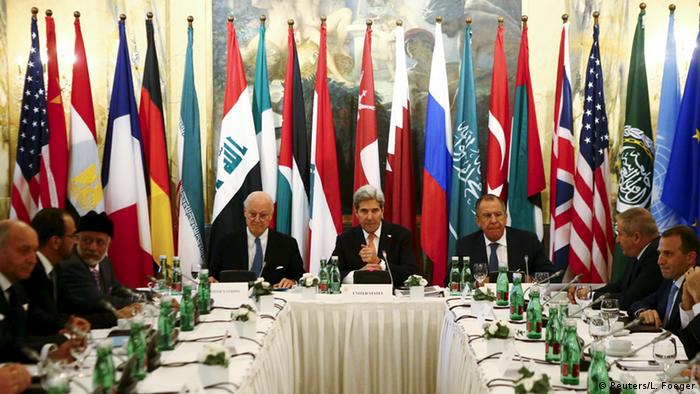 World leaders attending a meeting in Vienna on Saturday said they had agreed to speed up efforts to end the war in Syria, as news of the violent terrorist attacks in Paris overshadowed the diplomatic talks.

German Foreign Minister Frank-Walter Steinmeier announced that diplomats had agreed to hold elections in Syria within 18 months. Talks between the government and opposition leaders are expected to take place by January.

In addition, US Secretary of State John Kerry said the UN Security Council had approved a resolution in favor of a ceasefire.

The announcement was dampened somewhat by the news out of Paris, which saw a string of coordinated terrorist attacks overnight that left more than 128 people dead.

Kerry and his Russian counterpart Sergei Lavrov both condemned the attacks and emphasized the need to defeat extremist militant groups like the 'Islamic State' (IS), which claimed responsibility for the massacre.

"These kinds of attacks are the most vile, horrendous, outrageous, unacceptable acts on the planet," Kerry said, adding it was important to "fight back, to hold people accountable, and to stand up for rule of law, which is exactly what we are here to do."

Both Kerry and Lavrov, as well as EU foreign policy chief Federica Mogherini, said the Vienna talks were an important step in bringing world powers closer to reaching a solution to the crisis in the Middle East.

A plan from the Kremlin to create a new constitutional commission in Syria has raised a few oppositional eyebrows. It neither calls for the immediate resignation of Assad, nor bars him from standing for election. (11.11.2015)

A government official has said Russia is not tied to saving Syria's Bashar al-Assad, according to a news report. The comment comes amid disagreement between world powers regarding the fate of the Syrian leader. (03.11.2015)

Iran has said it might opt out of Syria talks, citing the 'negative' role of its regional rival Saudi Arabia. Iranian President Hassan Rouhani also called on Riyadh to end 'intrusions' in Middle Eastern affairs. (02.11.2015)