Lawyer for jailed HDP politician Yuksekdag in Turkey: independent verdict would be a ′miracle′ | Europe| News and current affairs from around the continent | DW | 05.07.2017

Lawyer for jailed HDP politician Yuksekdag in Turkey: independent verdict would be a 'miracle'

The latest trial against pro-Kurdish HDP politician Figen Yuksekdag has begun in Turkey. She's already been convicted on several counts amid Turkey's post-coup crackdown. One of her 1,200 lawyers calls the case a farce. 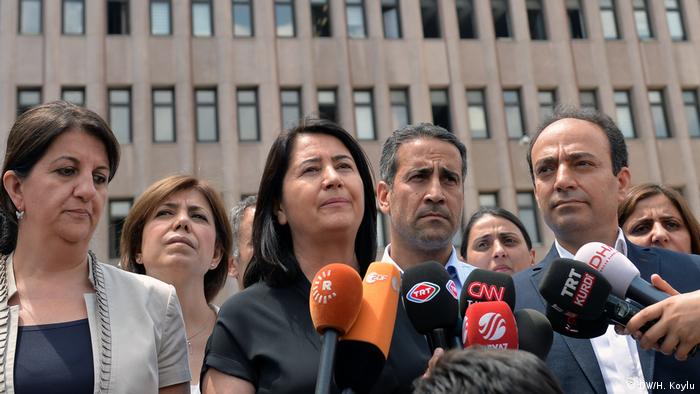 Yuksekdag's lawyer told DW 'the entire case' against her is 'unconstitutional'

The former co-chair of Turkey's Peoples' Democratic Party (HDP), Figen Yuksekdag, appeared in court in Ankara on July 4. The court adjourned on opening day, setting the next trial date for September 18.

The mainly Kurdish HDP has been a prime target for President Recep Tayyip Erdogan, even before the failed coup attempt around one year ago. The government accuses it of supporting Kurdish separatists, including the outlawed Kurdistan Workers' Party (PKK) that Turkey classes as a terrorist organization.

The efforts to prosecute Yuksekdag and other opposition politicians picked up real pace in Turkey in May last year, when parliament voted to revoke immunity from prosecution for MPs. This move followed intensified fighting with the PKK in Turkey's southeast, and the HDP diluting the power of President Erdogan's party by clearing the 10 percent threshold needed to claim seats in parliament.

Yuksekdag has already been convicted on charges including spreading "terrorist propaganda" and stripped of her seat in parliament, but in the current case, prosecutors are seeking a whopping 83-year sentence for a string of allegations.

DW spoke to her lead lawyer, Gulseren Yoleri, about the latest case brought against the politician - one of thousands targeting the public sector since the failed coup.

DW: Yuksekdag's first court date in this trial took place 242 days after she was arrested. Do you think there is a significant delay in the trial?

Gülseren Yoleri: It took a while for the prosecutor to finalize the bill of indictment. And once it was completed, there was confusion over court authority. The investigation was initially carried out by the Diyarbakir Chief Prosecutor Office, and then it was transferred to its Ankara branch. And I believe the prosecutors also wanted to delay the due process a bit. 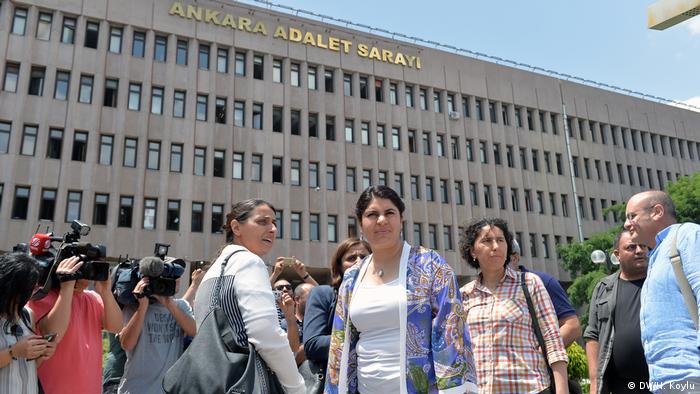 The case was ultimately moved to the capital, Ankara

Nominally, 1,200 lawyers will defend Yuksekdag. Why are so many lawyers symbolically defending her?

This idea was considered for the co-chairs of the party. Yuksekdag is an important politician. All the arrested lawmakers and mayors are going through the same difficulties in the due process, but prominent politicians have an important task to accomplish.

We decided to appoint 1,200 lawyers to defend her and their numbers will increase over time. We're making a political stand, drawing attention to the victimization of these politicians. The way that Yuksekdag lost her seat in the parliament was illegal, and she was arrested under dubious circumstances. For us, the whole process was premeditated. And we decided to make a stand against the illegality of her imprisonment.

Yuksekdag is a prominent figure for the representation of women in politics. The government is trying to push her out of politics though defamation campaigns. These 1,200 lawyers also represent a stance against these attempts by the government. She mentioned this in her defense speech: "It's not you who can revoke my parliamentary membership, it's the public," she said. These words are coming to life. The public and the supporters of this type of politics have proven that these words are true.

What is she accused of? What is the punishment that the prosecutors seek?

She is accused of "managing a terrorist organization," "making terrorist propaganda," "inciting violence," and "violating the law of demonstrations and gatherings." There are also absurd charges. For instance she is accused of being the manager of the Democratic Society Congress (DTK) - a platform of Kurdish associations and movements that has proclaimed democratic self-government in Turkey. She is not connected with the organization but if even she was, what difference does that make? In the past, the Constitutional Consensus Commission that was tasked to write a new constitution in the parliament consulted with the DTK, and the DTK was considered as "required" throughout now defunct constitutional amendment talks. So, what happened since then that the DTK has become illegal? Yuksekdag emphasized this point at her defense.

There are also charges that violate her freedom of expression. Therefore, she said "I always said what I know and believe. If I turn a blind eye to what is happening around me, then why am I a politician?" She defended herself as a politician. And this whole court process has become a political trial. We do not accuse the court of anything, but if you read the criminal charges, you would not find any crimes committed in the list. We are facing a mentality that does not want to share its power. The prosecutor is asking for an 83-year prison sentence.

Yuksekdag is also accused of making illegal statements in an interview with Deutsche Welle in 2015. Was there any mention of that during the hearing?

Yes, that accusation (terrorist organization propaganda) has been directed at us again but we objected. She was sentenced to 18 months in prison at the DW trial on June 6, 2017. Technically, you cannot convict someone for the same crime again. The court will re-evaluate the situation.

How do you evaluate the impartiality and the independence of the court in this trial process?

The justice system in Turkey has become a tool for the government. We do not think that it executes its own decisions. We spoke with the panel of judges for one week to lift the decision that limited the numbers of the lawyers at the hearing to three. First, we could not convince them to reverse the decision, but after insisting they changed their mind.

For the justice system at large, we do not think the laws are applied properly. We found out that the individuals who wanted to attend the court hearing must get permission from the ministries of justice and foreign affairs. The justice system cannot even decide who is allowed to attend the hearings or not. The entire case is unconstitutional. The judge knows this, the prosecutor knows this, but they are still present at the hearing. It would be a miracle to have an independent verdict in a dependent justice system.