Lawmakers Castigate Use of Full-body Scanners at Airports | Europe | News and current affairs from around the continent | DW | 23.10.2008

Lawmakers Castigate Use of Full-body Scanners at Airports 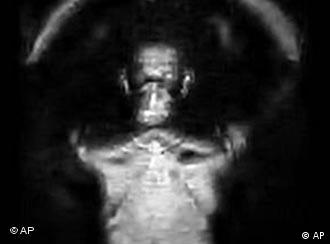 A plan to introduce full-body scanners at airports throughout the EU was voted down by a margin of 361 to 16 with 181 abstentions in the European Parliament Thursday.

Saying that the scanners "have a serious impact on the fundamental rights of citizens", the lawmakers voted on a non-binding resolution asking the bloc's executive European Commission to carry out an economic, medical and human rights assessment of the impact of using full-body scanners.

Body scanners use radio waves to display full-body images that reveal whether passengers are concealing weapons or explosives under their clothes.

The Commission proposed last month that the scanners be added to a list of security measures that can be used at airports in the 27-country bloc. The EU Commission says the proposal is meant to harmonize the conditions in which they can be operated.

The scanners are already in use at London's Heathrow and Amsterdam's Schiphol airports to speed up security checks and to avoid hand-frisking passengers.

"A serious breach of fundamental rights"

While the European Parliament resolution does not call for an outright ban on such scanners, some EU lawmakers said they found them unacceptable. 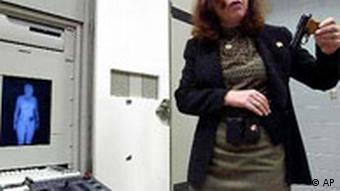 The scanner is touted as a faster alternative to body searches

"I think this is an offense against human dignity. Using this technology does not make us safer," said the leader of the assembly's Socialist group, Martin Schulz.

"These devices allow one to see genitals, if a woman has big or small breasts," said German Social Democrat lawmaker Wolfgang Kreissl-Doerfler, during debate on the topic.

He said the idea was proof of the "paranoia of interior ministers" when it comes to the question of fighting terrorism.

Green MEP Eva Lichtenberger said the machines could be a "serious breach of fundamental rights and the defense of human dignity. It seems that there is no real effort to see whether they really increase security."

A voluntary way to speed up security screening

"The body will indeed be pictured," he said. "But the quality is more that of a negative of a photograph, it is not a very clear image but sufficient to detect metal things, explosives or strange objects."

Ahead of the debate, EU Transport Commissioner Antonio Tajani likewise insisted that people would not be forced to go through them.

"The body scanner will never be made obligatory. It's an alternative to hand searches," he said, adding that the images "would not be recorded and never stored" on a database.

He said the machines could help shorten security lines at airports, and that personally he found body searches to be more invasive than the machines.

"But everyone is free to choose," he said.

The European Commission agreed to a plan to collect fingerprints and photographs from foreigners entering the EU, part of an effort to fortify the bloc's borders. (13.02.2008)

A potential scandal over infringements on privacy rights has surfaced in Brussels after it was revealed that the EU is considering launching a fingerprinting drive which would involve citizens as young as six years old. (27.03.2008)