The European Commission agreed to a plan to collect fingerprints and photographs from foreigners entering the EU, part of an effort to fortify the bloc's borders. 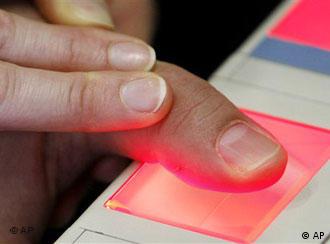 The move is part of a European effort to fortify the bloc's borders to the outside world. Brussels said the steps are needed to guarantee the free movement of Europeans inside the Schengen no-borders area.

The plan, which was presented on Wednesday, Feb. 13, could see EU funds used to develop surveillance equipment like cameras, sensors and pilot-less drones. Civil libertarians argue that the controversial measures infringe on people's privacy and won't fight crime.

But proponents of the plan called the proposals "further building blocks in the often stated aim of the European Union to build a space of free and secure travel through collective responsibility and solidarity." 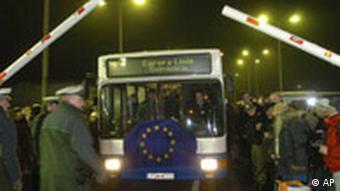 If the 27 EU nations approve the plans, which the Italian commissioner hopes will enter force between 2010 and 2015, people traveling to Europe would be screened for security risks at several levels.

To get a short-term visa, they would have to provide biometric and other details to the consulate concerned in their country of residence, which would be entered into the visa information system database.

System would troll for expired visas

On arrival, this data would be checked with a new entry-exit register that would note the time and place of entry of any non-EU national. It would then send an alert once their visas expire and no exit has been recorded.

The extra security measures could be compensated by accelerated, automated check-in procedures for registered travelers considered safe by consular authorities.

"The citizens of the EU have earned our attention," Frattini wrote on his Web site. "We have to keep their daily subway or bus ride from turning into a death zone."

All EU states except Britain, Ireland, Cyprus, Romania and Bulgaria are part of the borderless area, to which non-EU members Norway and Iceland also belong.

Similar to US ports of entry 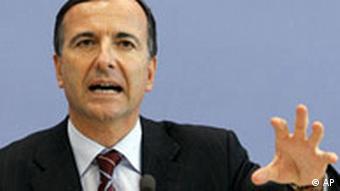 Several of Frattini's security proposals have met with stiff opposition

Frattini said the register would be similar to the electronic scanning of fingerprints and eyes at US ports of entry and would "make better use of technology." Biometric security checks are already in place in airports in Frankfurt, London and Stockholm.

The initiative would only come into force upon approval by the European Parliament and by member states. Frattini has not said how much he expects the security measures to cost.

On top of addressing a potential terrorist threat, officials in Brussels said the plan is also geared toward cracking down on the thousands of foreigners who enter the EU on a valid visa but then become illegal immigrants by overstaying their visit.

"These people are a main factor behind illegal immigration," Frattini said last month at an informal meeting of EU interior ministers.

The new system, however, would only record the identities of people who enter the 27-member bloc legally, not the hundreds of thousands estimated to immigrate to the EU illegally each year.

Frattini's proposals have come under fire from civil liberties advocates, who say they pose a formidable threat to people's privacy.

"More and more surveillance measures are called for, decided and put in place, but actual security benefits are seen less and less," Wolfgang Kreissl-Doerfler, a German member of the European Parliament, said in a statement. "A population that feels put under state observation will always feel less safe -- never safer."

Pleased with the state of things after opening borders in the European Union's eastern region, officials are considering an electronic entry and exit register designed to track down illegal immigrants. (25.01.2008)

Individual privacy is under siege as governments worldwide introduce ever-increasing surveillance measures, according to a global privacy index in which Germany slipped from number one to seventh spot in Europe. (07.01.2008)

Do you think fingerprinting and entry-exit record-keeping makes countries safer? Send us your comments and please include your full name and country in your reply.