Latvia′s financial sector rocked by US probe and bribery charge | Business | Economy and finance news from a German perspective | DW | 19.02.2018

Latvia's financial sector rocked by US probe and bribery charge 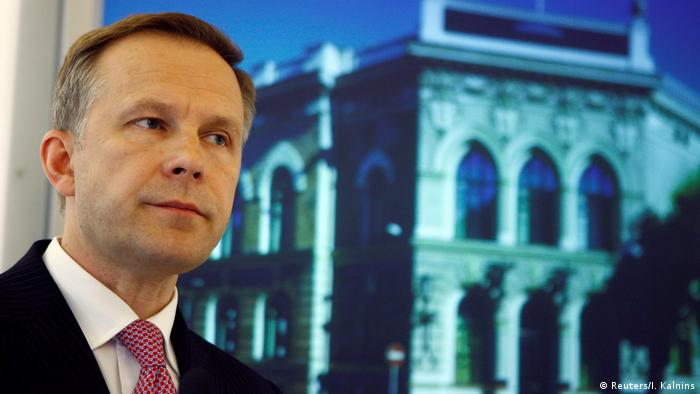 Latvia's ABLV Bank on Monday was ordered by the European Central Bank (ECB) to stop all payments as its liquidity position had deteriorated sharply since the US Treasury accused it of allowing clients to conduct business with North Korea.

The ECB said it had agreed to lend ABLV €97.5 million ($121 million) to help it with liquidity, with high-quality assets as collateral. Beyond depositors not being able to access their funds, imposing a stay on payments is controversial because of the potential damage to a bank's counterparties.

The support to be paid out through Latvia's central bank became necessary after the US Treasury's Financial Crimes Enforcement Network (FCEN) said it had launched a probe investigating whether ABLV executives and management had bribed Latvian officials to cover up their activities.

"ABLV has institutionalized money laundering as a pillar of the bank's business practices," the FCEN said in a statement linking some of the alleged activities to North Korea's ballistic missiles program.

In its document detailing the allegations, FCEN said the reliance of the Latvian banking system on non-resident deposits for capital exposed it to increased illicit finance risk totalling roughly $13 billion (€10.5 billion).

The bank has claimed the US accusations are based on unfounded and misleading information. In a statement, ABLV Chairman Ernests Bernis said the bank was the target of a "deliberate defamation campaign" and emphasized that "there is not and never has been any bribery regarding state authorities."

In an effort to shake off accusations that its banks hold wealth with questionable origins, Latvia's financial regulator has fined three banks for handling accounts that were involved in a $1 billion Moldovan fraud in 2014. Five Latvian banks, including ABLV, agreed last year to record fines for failing to perform adequate due diligence and gather sufficient information on transactions and beneficiaries of deals linked to North Korea.

The move comes as Latvia's anti-corruption authority detained central bank governor Ilmars Rimsevics, an ECB policymaker, over the weekend for demanding a bribe.

Jekabs Straume, who leads the Corruption Prevention and Combating Bureau, told a news conference Monday that his office began an investigation on Feb. 15 linked to the demanding and taking of a bribe by two people of more than €100,000.

While Straume didn't name him, he was speaking at a news conference at which Kucinskis, the prime minister, had earlier said Rimsevics's detention would be addressed.

Rimsevics' lawyer, Saulvedis Varpins, said the central bank governor rejected the allegations made by the anti-corruption authority. "But they [the allegations] have been expressed only orally, so we have not seen a specific document at the moment," he added.

As Ilmars Rimsevics headed for release on bail, Prime Minister Maris Kucinskis heaped pressure on him to step aside. "I can't imagine that the Bank of Latvia president, who was detained under very serious accusations, could work, he told Latvian TV in an interview on Monday.

But Kucinskis also said that Rimsevics's case had no connection with the order imposed on ABLV.

Both the detention and the ECB's move against ABLV represent setbacks for Latvia, which just last year saw its economy struggle back to pre-crisis levels after losing over a fifth of its output in the global financial crisis.

uhe/tr (AFP, Reuters, dpa)DW's editors send out a selection of the day's hard news and quality feature journalism. You can sign up to receive it directly here.

Latvia: No sympathy for Greece