A new report says Europe's growing demand for biofuels increases the risk of conflict over land and impairs food security. The authors even warn of a potential global crisis. 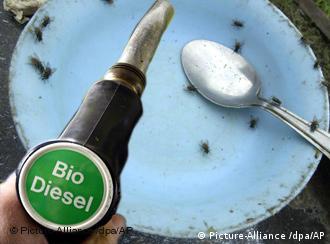 Demand for biofuels could lead to more food shortages

The report, compiled by international environmental pressure group Friends of the Earth (FoE), says that the amount of land being taken in Africa to feed Europe's increasing demand for biofuels is "underestimated and out of control." An area of arable land the size of Denmark – around five million hectares – has been acquired by foreign companies to produce biofuels, mainly for the European market, the report says.

The FoE warns that even more land will be required for biofuels if the European Union is to reach its target of 10 percent of transport fuels from renewable sources by 2020. 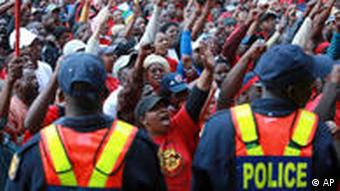 "Our research shows that Europe's demand for biofuels is a major driver of land grabbing in Africa," Adrian Bebb, food and agriculture campaigner for FoE Europe, told Deutsche Welle. "Local communities are facing increasing hunger and food insecurity just so Europe can fuel its cars."

The pressure on local communities, regional and national governments in the 11 African nations investigated in the report's research could lead to internal conflicts and potentially spread across borders as arable land, forests and natural vegetation are cleared for biofuel production.

According to a controversial leaked World Bank report on land grabs – which it has so far refused to release publicly – local communities are being bypassed in consultations between land-acquiring companies and African governments, a situation which has already led to conflicts over land rights. The report, cited by FoE, claims that there have been protests in Tanzania, Madagascar and Ghana following land grabs by foreign companies. 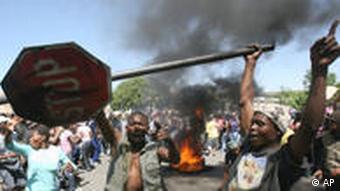 "The expansion of biofuels on our continent is transforming forests and natural vegetation into fuel crops, taking away food-growing farmland from communities, and creating conflicts with local people over land ownership," said Mariann Bassey, food and agriculture coordinator for Environmental Rights Action/FoE Nigeria.

"The aim of the investments taking place at the moment is to satisfy the food or agrofuel needs of foreign governments; some Gulf States, Asian countries and also EU-countries, and in the case of private companies, the hope for lucrative gains by speculating with land or trading agricultural goods," Alexa Emundts from MISEREOR, a German development organization affiliated with the International Cooperation for Development and Solidarity Alliance, told Deutsche Welle.

"Most of the investments are done by a broad range of private companies, but there are also joint ventures with governments or purely government-lead investments from a number of Gulf States, China, India and others."

Many of these investments, aiming at the production of export goods, target non-democratic countries that suffer from high rates of malnutrition and which even depend on food relief, such as Sudan and Ethiopia.

"By further reducing access of the local population to land, this situation will still be aggravated," Edmundts said.

With increasing demand for biofuel production reducing areas of arable land around the world, experts fear that the ultimate impact on food security will be global rather than local. Food shortages bring their own threat of instability and unrest. Resources and commodities used in food production will become increasingly sought after, and regions providing these will become more important and protected.

"When the food prices spiked in 2008-2009, we saw serious riots and the governments of Haiti and Madagascar fell," said FoE's Adrian Bebb. "Over the coming years we will see an increase in competition for land and natural resources, especially to meet the demand for biofuels ... Biofuels also need a lot of water and this could be a sticking point between nations." 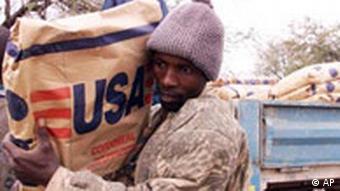 "Using agriculture land in Africa to supply the world's commodity markets will make it more difficult for Africans to feed themselves," he added. "Many countries and regions in Africa already face serious food insecurity issues. Rural communities losing their access to land and water would exacerbate existing problems and in likelihood lead to a greater dependence on imported food aid."

Andrew Jarvis, a food security expert at Chatham House, agreed that the strategic importance of land for food production, and who owns it, is a rising political issue.

"We are seeing debates about so-called land grabs in Africa and Asia, but also debates in Australia and New Zealand about foreign – especially Chinese – ownership of farmland, and a resurgence of interest in the US too," he told Deutsche Welle.

"Countries such as Russia and the Ukraine can now see their potential for wheat production as a source of economic growth but also of strategic advantage. With countries seeking to have rights to food produced in other states, there is certainly scope for these deals to exacerbate local and regional conflict risks."

Dr. Stephen Humphreys, a food-security expert at the London School of Economcs and Political Science, said today's global food system "has the form of interdependent chaos."

"It is globalized in the sense that falling or rising wheat subsidies in the US will affect the price of bread in Swaziland – but without anyone actively overseeing or managing these effects," he told Deutsche Welle.

"The principal flow of food is still from North to South, due to a general policy of food sovereignty and over-production in the countries of the North. In principle, biofuel production in the South is therefore unlikely to impact food availability in the North, at least in the medium term."

If arable production increasingly becomes the preserve of in the North, then North-South conflict is unlikely, he added.

"There are powerful structures in place to maintain security and stability in these countries. But of course, where production continues in diminishing pockets of countries with lesser security apparatus, we should expect conflict in the event of global food shortages."

Hans-Joachim Braun, director of CIMMYT's Global Wheat Program, spoke to Deutsche Welle about one of the world's most important crops. (15.03.2010)