With its criticism of past coaches and their methods, the autobiography of Philipp Lahm, captain of Bayern Munich and Germany's national team, is rubbing a lot of people the wrong way . 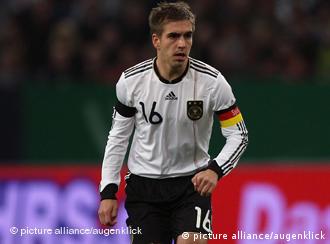 Philipp Lahm: Uncompromising on and off the field of play

Anyone who has seen Bayern Munich and German national team defender Philipp Lahm play over the last few years will know that he is a man with a singular, committed mind. As such, it may come as little surprise that it is his autobiography which is sending shockwaves through German soccer at the moment.

This is the man who, after all, took on another fiercely outspoken and stubborn character in the German game, Michael Ballack, over the captaincy of the national team, refusing to make way for the returning Ballack after leading Germany to third place in the 2010 FIFA World Cup in South Africa in the injured midfielder's absence.

Lahm's autobiography "The Subtle Difference" is being serialized in Germany’s top-selling tabloid daily Bild before its public release, and the captaincy episode will surely be included in the book. Until then, the current Germany captain will have to make do with angering Jürgen Klinsmann, who coached Lahm at both club and international level, former Munich bosses Felix Magath and Louis van Gaal, as well as former national team coach Rudi Völler. Lahm offers revelations about their approaches to coaching, their character flaws - and ultimately their failings in the defender’s eyes.

In his book, 27-year-old Lahm claims that, after Klinsmann took charge in 2008, it didn’t take the Bayern squad long before they realized that Klinsmann, the current coach of the US national soccer team, would fail.

"All the players knew after about eight weeks that it was not going to work out with Klinsmann," he writes. "The remainder of that campaign was nothing but limiting the damage." It soon became clear that "the Klinsmann experiment had failed." 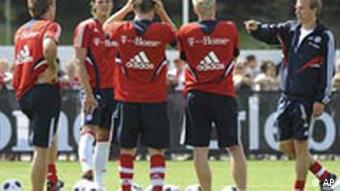 While stating that "Klinsmann was the shining hero of the 2006 World Cup when Bayern took him on," Lahm quickly adds weight to the long-held belief that it was in fact Klinsmann's assistant, current Germany coach Joachim Löw, who was the tactical genius behind Germany's run to the semi-finals in the 2006 tournament.

"We practically only practiced fitness under Klinsmann, there was very little technical instruction and the players themselves discussed the way they would play a game before the match," Lahm writes. He re-uses an anecdote from former Bayern defender Zé Roberto to emphasis Klinsmann's tactical naivety. The Brazilian reveals that a half-time talk by Klinsmann toward the end of his reign consisted of only: "You have to score a goal."

Lahm, who - a two-year loan at VfB Stuttgart aside - has been at Bayern since he joined as a 12-year-old in 1995, confirms that Klinsmann soon alienated the players and club management at Bayern with his unorthodox approach to coaching and preparation, which included yoga and the building of a meditation garden at the club's training complex. As his reign came to an end, more and more players went public with their frustration at his tactics.

Klinsmann lasted less than a season in Munich and was sacked in the spring of 2009 after the club crashed out of the UEFA Champions League quarter-finals to Barcelona.

No escape for Magath and van Gaal

More successful coaches than Klinsmann fail to escape unscathed in Lahm's autobiography. Back-to-back double-winning coach Felix Magath, a man known for his abrasive nature, is described as a coach who pushed the team to breaking point during his tenure between 2004 and 2007. 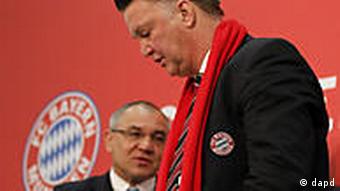 Ex-Bayern bosses Magath and van Gaal are both criticized

"Felix Magath works with pressure," Lahm writes. "At first, we didn't know where we stood with him. That prompted the players to give their best because they wanted to play, but after a while the players knew where they stood and Magath no longer received the same effect."

"In the 2006/07 season, we had a poor campaign," he adds. "Too many players felt like they were put in a backwater. [Magath] didn't reach the desired goals with his methods." Lahm describes the rift that developed between the players and Magath as a "stress fracture."

Van Gaal, who awarded Lahm the Bayern captaincy and who led the team to a Bundesliga and German Cup double as well as taking them to the Champions League final in 2010, is painted as stubborn man whose inflexibility eventually led to his departure.

"Louis van Gaal can be credited for implementing a playing philosophy, which made us very successful in the first season," Lahm writes. "But he refused to acknowledge the deficits of his philosophy in the second season and he refused to eliminate them."

"Our game was completely geared towards offense and this saw us concede a lot of goals in Van Gaal's second year," Lahm adds. "I pointed out some of our areas of concern to Van Gaal and he listened to me, but then he would do what he wanted to do."

Van Gaal, who has won a combined seven league championships in his native Netherlands, Spain and Germany as well as the 1995 Champions League with Ajax Amsterdam, joined Bayern in 2009. The success of his trophy-laden first season however soon evaporated and he was fired in April this year.

Lahm has a history of speaking his mind. In 2009, Bayern fined him at least 50,000 euros ($75,000) for giving an unauthorized interview with the German daily Süddeutsche Zeitung in which he criticized the club's transfer policy.

Arjen Robben, the Bayern winger and Dutch compatriot of Van Gaal, has taken umbrage to the criticism of Van Gaal and has defended his former coach by accusing people of having a very short memory when it comes to the coach's record at Bayern.

"Many players, including myself, can be very grateful to him," Robben told German magazine Sport-Bild. "For me, he is still one of the best coaches in the world."

"I have to laugh about how quickly things changed. One day he was a hero, the next a loser." 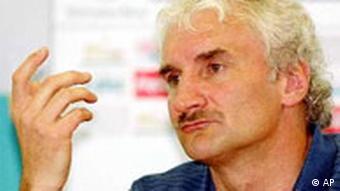 Ottmar Hitzfeld, the current coach of the Swiss national team and another of Lahm's former bosses at Bayern, said: "I find this book disagreeable because, as a current national player, one should be a little more reserved," he told Sky TV. "This is a book which criticizes his superiors. One has to ask oneself, why has he not made this criticism earlier?"

Lahm did not criticize former national team coach Rudi Völler directly, simply revealing that players did not train particularly strenuously during his tenure. But Völler perhaps chose the angriest terms when speaking about Lahm's book, labeling it "pathetic and shabby" and calling Lahm a man of "no character."

The German Football Association (DFB) issued a press release on Thursday, saying Lahm had been asked to meet with Coach Joachim Löw and his management team before the squad's next qualifier, against Austria next week. In the meantime, Lahm offered an apology of sorts.

"I didn't want to offend Rudi Völler, Jürgen Klinsmann, or other people, much less insult them. I am sorry. I'd like to apologize to all parties for any misunderstandings that might have been caused."

Lahm's book is not the first by a German soccer star to cause controversy. In 1997, former Bayern and Germany captain, the legendary - and much-maligned - Lothar Matthäus published "My Diary," an account of the 1996-1997 season which was basically a character assassination of everyone he encountered during that spell. He was stripped of the captain's armband before the book was even published and lost the respect of the Bayern team as soon as it was.

Others to have spilled the beans and caused controversy with their forays into literature have been former Bayern stars Steffen Effenberg and Sebastian Deisler, and former Germany goalkeeper Toni Schumacher.

It is unlikely Lahm will be the last.

Michael Ballack chose his first press conference since re-joining Bundesliga club Bayer Leverkusen as the stage to launch another broadside on Philipp Lahm over the captaincy of the German national team. (15.07.2010)

Bayern Munich defender Philipp Lahm has added another line to his long international CV this summer. German head coach Joachim Loew made the full-back captain of the national team in South Africa. (13.06.2010)

The management of German soccer giants Bayern Munich has slapped a record fine on German national player Philipp Lahm after he spoke what some describe as uncomfortable truths. (09.11.2009)

An own goal from returning defender Mats Hummels was enough to condemn Germany to defeat in their Group F opener against world champions France. With European champions Portugal up next, another early exit looms.

Ute Groth once attempted to run to become the DFB's first female president – but she wasn't nominated. In light of the current power struggle at the top of the DFB, she believes structural changes are needed.