Bayern Munich defender Philipp Lahm has added another line to his long international CV this summer. German head coach Joachim Loew made the full-back captain of the national team in South Africa. 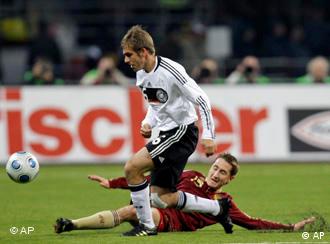 Lahm is a defending and attacking force for Germany

Without analyzing his game, it's hard to believe that the likely new Germany captain Philipp Lahm has been one of the world's best full backs for over six years now. The Bayern Munich defender just doesn't look old enough to have been at the top of the game in his position for that long. Yet he has been an integral player for both club and country since his appearances at Euro 2004 first caught the eye.

Lahm is not only coveted by the likes of Barcelona and Manchester United for his prowess in the full back role but also because of his versatility. As comfortable on the left as on the right, Lahm has shown his pace, dribbling and crossing abilities from both flanks. He has even played as an emergency holding midfielder and left-winger in his career, showing an aptitude for both.

The diminutive defender (170cm, or 5' 7") is a handful in full gallop, his small stature and low center of gravity making it very hard for opponents to knock him off the ball. He also packs a powerful shot with his strong right foot, utilized as a potent weapon by both Bayern and Germany. 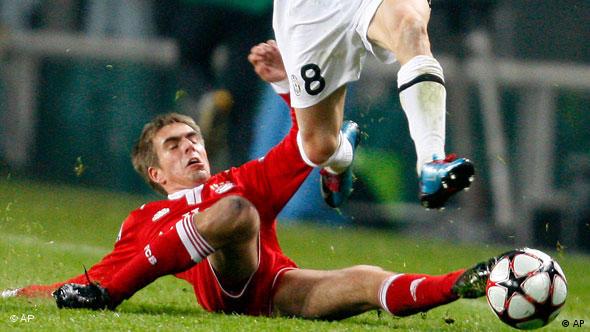 Lahm rarely has a bad game for either club or country and has stood out at each international tournament he has played in since making his Germany debut in February 2004. Lahm clearly relishes the biggest of stages. Outstanding campaigns at the European Championships in 2004 and 2008, and a starring role in Germany's 2006 World Cup campaign have only added to a reputation cultivated through top-notch domestic service, first with Stuttgart and then Bayern.

Starting the 2006 World Cup in style with the opening goal of the tournament, scored with a looping shot against Costa Rica, Lahm went on to become the only German player to play all 690 minutes of the host nation's campaign.

Six months after the tournament, he was nominated for the FIFA World Player of the Year award and was included in the Mastercard All Star Team of 2006. Two years later, after another impressive tournament at Euro 2008, he was included in the UEFA Team of the Tournament. This season with Bayern, he was also a unanimous selection for DW's Bundesliga Best XI.

Lahm brings a wealth of experience to the Germany team and it's no surprise that he has been chosen to wear the captain's armband following Michael Ballack's ankle injury. The Bayern defender's consistency and leadership will be vital to Germany's hopes of returning home from South Africa with the World Cup.

The German national team's nightmare has come true, with captain Michael Ballack out of commission for South Africa. So what will coach Joachim Loew do? Deutsche Welle's Jefferson Chase offers his thoughts. (17.05.2010)

There was much discussion and disagreement within the Deutsche Welle sports team about which eleven players made the biggest impact this season. But everyone agreed that that Arjen Robben fellow was pretty good. (19.05.2010)