Labor rights movements gaining momentum in China | Asia | An in-depth look at news from across the continent | DW | 05.01.2016

China's economic slowdown and lack of state protection are driving a growing number of workers to protest and go on strike. They demand higher wages and better working conditions. But how is Beijing dealing with them? 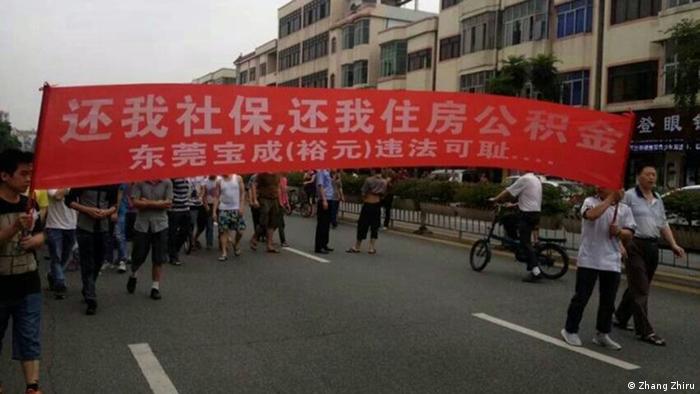 Chinese authorities recently detained seven labor activists in the southern province of Guangdong, alleging that they were "inciting workers to go on strike," and "disturbing public order," among other accusations.

But rights groups have criticized the move as part of the authorities' crackdown on the country's growing labor activism. Labor disputes have been on the rise in China in recent years, as a slowing economy has led to an increase in workers' layoffs.

The phenomenon is particularly evident in Guangdong, a traditional manufacturing centre. The province recorded a total of 412 strikes in 2015, the highest in the country, according to data compiled by Hong Kong-based advocacy group China Labor Bulletin (CLB).

The statistics also show a remarkable increase in the total number of strikes across the country, growing from 1,379 incidents in 2014 to a total of 2,741 in 2015.

The Chinese government has also noted the upsurge in labor disputes, with the country's Ministry of Human Resources and Social Security stating that there were 1.56 millions registered cases in 2014, an increase of 4.1 percent compared to that of 2013.

A lack of independent unions

The rapid rise in the number of strikes and worker protests in the world's second-biggest economy is a result of the country's weakening growth, CLB spokesman Geoffrey Crothall told DW. 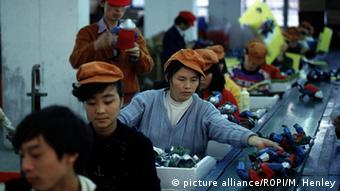 China's economic growth has been decelerating in recent years

"The economic slowdown is causing factories, construction projects and coal mines to close, and workers are often owed several months wages when their employers go out of business," Crothall said, adding that, in most cases, workers have no option but to take collective action to claim their rights.

But in China, workers do not have the right to join or form trade unions of their choice. There is only one lawful trade union nationwide - the government controlled All-China Federation of Trade Unions (ACFTU) - that acts as the leading body of all local union organizations, which are allowed under the Trade Union constitution.

A 2012 report published by the Brussels-based International Trade Union Confederation (ITUC) pointed out that the level of autonomy of most local unions remained low, with the majority of officials directly and indirectly appointed by the central government in Beijing. Moreover, the trade body stated, these unions were dominated by factory managements.

A strategy of carrots and sticks

Asian markets mostly fell at the end of the trading session on Tuesday. China's benchmark has stabilized a day after plunging nearly 7 percent. (05.01.2016)

To calm down strikes that involve significant numbers of workers, authorities often respond with a combination of both repression and appeasement, said Estlund, who is currently authoring a book about labor relations and reform in China.

Besides police intervention, the local ACFTU officials might attempt to negotiate a settlement between the factory management and the workers. But in some cases, striking workers seek not only higher wages and legally-mandated social security payments, but also demand the right to elect and control their own factory-level trade union.

"A single strike triggered by wage arrears may tap into discontent over low wages or other simmering issues, including demands for greater democracy in the enterprise trade unions," noted labor law expert Estlund.

Over the past decade, labor strikes in the Asian giant have also pressured a few international companies to raise wages for their China-based workers. A series of high-profile strikes in 2010 pushed the Japanese automobile manufacturer Honda and the Taiwanese electronics maker Foxconn to announce wage hikes.

"For several years after the Honda strikes in 2010, there were signs that China's leaders were seeking more sustainable systemic solutions to labor unrest that involved greater union accountability to workers and collective bargaining," Estlund said.

The ITUC report also stated that starting from 2010, provinces such as Guangdong and Fujian began to introduce collective bargaining legislation, as part of their efforts to improve the negotiation process between factory unions and managements.

No right to strike

Despite some successes, experts say organizing labor actions in China has become increasingly difficult and risky. "After strikes end, worker leaders are often targeted for reprisal by both employers in the form of dismissal, and by officials, in forms of detention, warnings and harassment," Estlund underlined.

"There is no right to labor strikes in Chinese law," Teng Biao, a human rights lawyer and a visiting fellow at New York University's US-Asia Law Institute, told DW. "'Freedom of labor strikes' was written in the Constitution of 1975 and 1978, but was removed in 1982," Teng added. 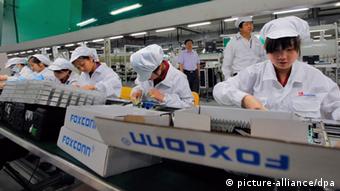 In a separate paper published by the ITUC in 2015, China was listed as one of the worst countries in the world to work in. The report cited physical attacks and threats against workers who participated in strikes by both employers and the government.

"Wide-scale abuses can be explained by the fact that there is no explicit recognition of the right to strike. Therefore, protests and strike actions are often treated as public security issues," it said.

Furthermore, labor activists who are believed to be encouraging the spread of strikes, or who are merely involved in multiple strikes, are targeted for repression, Estlund said. "In recent years, a handful of NGO activists have sought to help workers in individual strike actions - to help them choose leaders, formulate demands, maintain solidarity and avoid violence. And in the past few months, several of them have been arrested and detained."

"This is part of a larger move in recent years, especially under President Xi Jinping, to tighten up on all kinds of rights advocacy and open criticism of government policies," Estlund said.