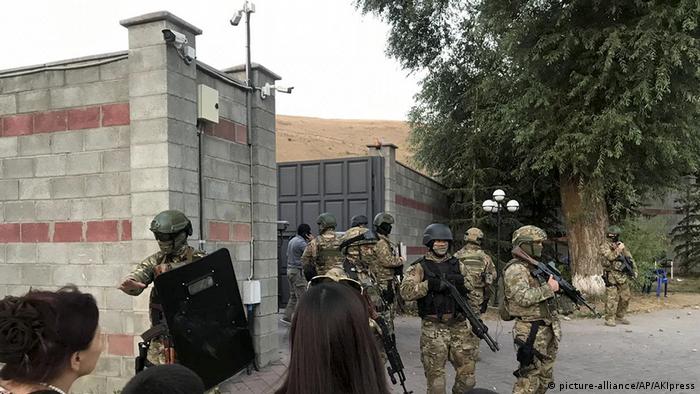 Kyrgyzstan special forces have launched another raid on ex-President Almazbek Atambayev's residence a day after their first attempt.

President Sooronbai Jeenbekov on Thursday ordered "urgent measures" to maintain law and order after a failed attempt to arrest his predecessor.

An officer died from gunshot injuries during a special forces operation at the home of former President Almazbek Atambayev on Wednesday.

The raid on Atambayev's residential compound in the village of Koi-Tash south of the capital of Bishkek continued well into the night.

Supporters of the ex-leader took up arms and threw stones to prevent his detention.

Internet and mobile networks were seemingly blocked by authorities.  An AFP correspondent saw some supporters beat special forces officers, disarm them and take six servicemen as hostages. It remains unclear whether the hostages were later released.

Some supporters barricaded themselves inside the residence. The chief of the Chui province police department was also left in critical condition after suffering from concussion during the raid.

A total of 23 civilians and 24 members of law enforcement were hospitalized after the operation. Some of the civilians suffered wounds from rubber bullets. 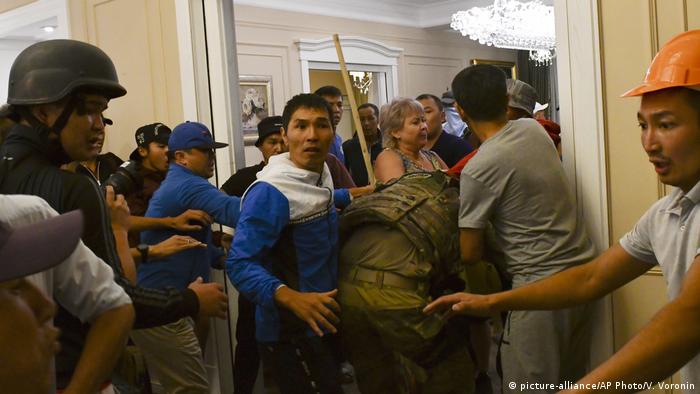 Kyrgyz "will not be slaves of the ruling clan"

President Jeenbekov the held an emergency meeting early Thursday with the state security council and parliament.

Meanwhile, Atambayev issued a statement on a television channel he owns after the country's interior ministry failed to resolve tensions.

Kyrgyzstan's people "will never live on their knees, will not be collective farm sheep, will not be slaves of the ruling clan," he said.

Tension between between Atambayev, who was in office from 2011 to 2017, and his successor Sooronbai Jeenbekov has dominated the country's political scene.

Atambayev's supporters claim that Jeenbekov was responsible for parliament stripping Atambayev of immunity and the state prosecutor pressing corruption charges against him. 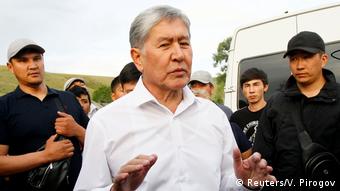 Ex-President Almazbek Atambayev was stripped of legal immunity after a parliamentary vote.

Parliament lifted the former president's immunity in June as prosecutors sought to charge him on corruption charges. Atambayev was under investigation in five criminal cases, mostly related to corruption.

Russian President Vladimir Putin met with Jeenbekov and Atambayev in Moscow in July in an attempt to ease tensions between the leaders.

The Russian  president called on "everyone to unite around the current president and help him develop the country" during the meeting with Atambayev.

Putin had warned the former Soviet country against any moves that could further destabilize Kyrgyzstan.