After an academic career in the US and England, Kwame Nkrumah returned home to lead Ghana into independence and become its first president. His vision of a US-style union could however not be achieved.

When did Kwame Nkrumah live?

What was Kwame Nkrumah renowned for?

Pan-Africanist, leading Ghana into independence (in 1957) and acting as its first Prime Minister and President (replaced by a coup in 1966), played key role in creating the Organisation of African Unity (later to become the African Union).

What was Kwame Nkrumah criticized for?

Sympathizing with socialist ideology, calling himself Marxist. This brought him enemies within and outside his country. Some believe US intelligence is responsible for his downfall.

Who inspired Kwame Nkrumah or was inspired by him?

He got immersed into the African-American liberation struggle, met Martin Luther King Jr. while in the US, read (and later discussed with) sociologist, pan-Africanist and human rights activist W.E.B. Dubois. While studying in Great Britain, he crossed paths with many fellow Africans struggling for independence, the likes of Kenya's Jomo Kenyatta, Ethiopia's Haile Selassie and Malawi's Hastings Kamuzu Banda.

What are some famous remarks of Kwame Nkrumah?

"We face neither East nor West: We face forward."

"Revolutions are brought about by men, by men who think as men of action and act as men of thought."

"Freedom is not something that one people can bestow on another as a gift. They claim it as their own and none can keep it from them.

Can you tell me about the most famous controversy surrounding Kwame Nkrumah's legacy?

In 2012, a statue of Nkrumah was unveiled at the African Union headquarters in Addis Ababa.But why Nkrumah? In Ethiopia, many felt former Emperor Haile Selassie would have deserved the honours as being considered the founding father of the AU. Then Ethiopian Prime Minister Meles Zenawi, however, spoke out for Kwame Nkrumah.

Isaac Kaledzi, Gwendolin Hilse and Philipp Sandner contributed to this package. It is part of DW's special series "African Roots", dedicated to African history, a cooperation with the Gerda Henkel Foundation. 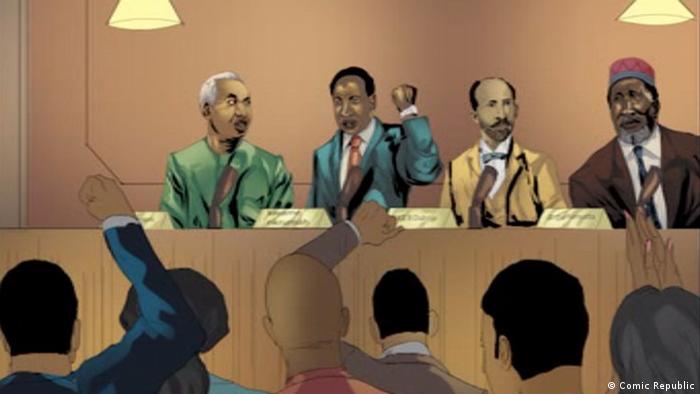 While studying abroad, Nkrumah met other African leaders who were also fighting for independence

A pronounced pan-Africanist, Nyerere led Tanganyika to independence and later unified it with Zanzibar to form Tanzania. Despite shortcomings, his Ujamaa policy is credited for giving Tanzania a national identity. (10.01.2018)

Highlights from 50 years of African unity

The Organization of African Unity (OAU) was formed 50 years ago. In 2002 it was replaced by the African Union. Here are some of the highlights from the past half century. (24.05.2013)