A group of 34 Kurds has crossed from bases in Iraq to Turkey in what the Kurdish rebel group PKK has called a "peace caravan." They hope their surrender will help resolve a decades-old conflict. 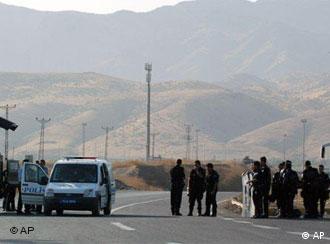 The group of men and women, including eight PKK fighters and 26 Kurdish refugees, smiled as they entered Turkish territory on Monday, crossing over from the Iraqi Kurdish region, where most of the estimated 10,000 rebels are based. They were immediately detained by Turkish security forces.

The symbolic move came in response to a government initiative to end a conflict that has claimed more than 40,000 lives, displaced thousands and led to allegations of gross human rights violations.

The surrender was announced over the weekend by a PKK official who stressed that it was a gesture to the Turkish government in response to its democratization initiative. The initiative aims to bring to an end to the 26-year conflict between the Turkish state and the PKK. 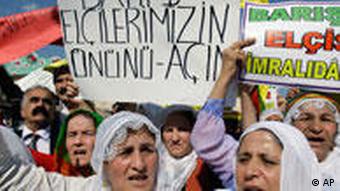 Turkish Kurds demonstrate in support of Kurdish rebels in Istanbul

“It is a very good sign, it is one first fruit of the democratic initiative,” said Ibrahim Kalin Allen, an advisor to the Turkish Prime Minister, Recep Tayyip Erdogan. He added that he hoped this first step would speed up the entire process.

The PKK has been fighting Turkish forces since 1984. Although the group originally sought the creation of a separate Kurdish state, it now calls for improved rights for Turkey's Kurds, believed to account for roughly a fifth of Turkey's population.

Prime Minister Erdogan has indicated the country is considering far-reaching steps to resolve the conflict. At the beginning of the year, Turkish state TV took a ground-breaking step and launched a Kurdish-language TV channel. Talks which have included the country's main Kurdish party, the Democratic Society Party (DTP), began just a few months ago. The government has also reached out to the Kurdish leadership in neighboring Northern Iraq. Until recently, Ankara accused Iraqi Kurds of working with the PKK.

The government opposes an amnesty for the PKK

A spokesman for one of the ruling Iraqi Kurdish parties, Saffeen Diyazee, welcomed the surrender, but cautioned that the government's words of peace must now turn into concrete steps. “There is not a solid idea, or at least publicly there is no solid project," he said. "We hope ideas can develop and can be formulated into a state policy, something solid, something more tangible which can guarantee an end to this violence, something that should be welcomed by all parties.”

Erdogan and the army have ruled out any role for the PKK in the government initiative, but have said the state will be generous with PKK militants who surrender if it is determined they were not involved in attacks.

On the 25th anniversary of the launching of an armed struggle by Kurdish rebels against the Turkish government, the separatists are expected to push for a peace plan to try end the conflict. (15.08.2009)

After 25 years of conflict, Turkey makes overtures to Kurds

As votes cast by Iraqi Kurds Saturday are counted, Kurds in Turkey are mulling recent overtures made by Ankara. After 25 years of conflict between Turkey and Kurdish separatists, there are signs of a rapprochement. (26.07.2009)

Turkish government prepared to work for peace with PKK

Turkey intends to resolve the conflict between the Turkish state and Kurdish insurgents of the PKK. An imprisoned senior PKK leader also has a peace plan to mark the 25th anniversary of the start of the conflict. (25.07.2009)