After 25 years of conflict, Turkey makes overtures to Kurds | Europe| News and current affairs from around the continent | DW | 26.07.2009

After 25 years of conflict, Turkey makes overtures to Kurds

As votes cast by Iraqi Kurds Saturday are counted, Kurds in Turkey are mulling recent overtures made by Ankara. After 25 years of conflict between Turkey and Kurdish separatists, there are signs of a rapprochement. 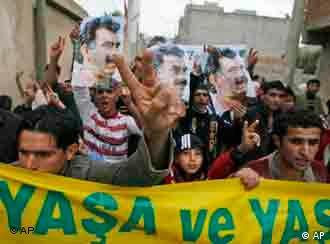 Turkish Prime Minister Recep Tayyip Erdogan announced last week that his government was working on steps to solve the Kurdish conflict, which has claimed over 40,000 lives.

He did not say when the plan would be announced or what it might entail, but did say the interior ministry was already discussing the issue with other branches of government including the military and the national intelligence agency.

Abdurrahman Kurt, a Kurdish member of parliament for the ruling the AK party, said his government would deliver further concessions to Kurds. 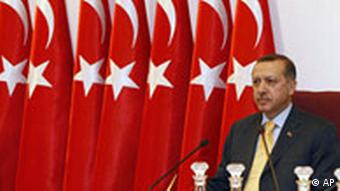 "We are going to open Kurdish language institutes in the universities and we are allowing Kurdish names to be given to the children and Kurdish broadcasting," he told Deutsche Welle's correspondent in Istanbul.

However, Erdogan has ruled out including the country's main Kurdish party, the Democratic Society Party (DTP), in the peace initiative until they denounce the outlawed Kurdistan Workers Party (PKK) as terrorists.

"There is a problem when you talk about this, not with the Kurds, but with the chief of the army and intelligence and your ministers," she told Deutsche Welle.

The government's move is seen as a reaction to a plan expected to be put forward by the jailed separatist leader Abdullah Ocalan on August 15. That is the date 25 years ago when the PKK took up arms against the state.

Ocalan's lawyers contacted academics and journalists this month to plug his plans for a "road map." Details have not been released, but the Turkish newspaper Sabah reported that it would include a ceasefire, an unconditional amnesty for PKK fighters, Kurdish-language education and moves towards greater autonomy. 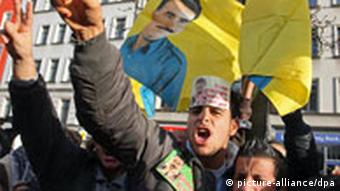 Abdullah Ocalan is still popular among many Kurds

Ocalan has been in prison since 1999. Originally sentenced to death, his punishment was commuted to life in 2002 when the death penalty was abolished due to pressure from the European Union, which Turkey is eager to join.

Ever since his capture, the 61-year-old has said the PKK is ready to disarm if Turkey is prepared to negotiate.

Though his calls have received little attention over the past decade, the approaching anniversary of the conflict and his anticipated road map have generated interest in a man still reviled by most Turks as a terrorist, but respected by many Kurds as a freedom fighter.

In recent years, Turkey's government has softened its hard line on Kurds, bowing to some of the demands that have added fuel to the insurgency. Ankara has allowed children to be officially registered with Kurdish names, tightened anti-torture laws, and allowed some Kurdish-language teaching.

However, fighting has persisted with the PKK using northern Iraq as a base for cross-border operations.

Iraqi Kurds flocked to the polls on Saturday to vote in presidential and parliamentary elections. Opening hours for polling stations had to be extended following complaints about missing voter registrations. (25.07.2009)

The Turkish government has relaxed its restrictions on the use of the Kurdish language in public. Yet media is another matter. Many Kurds in Turkey rely on ROJ TV -- a Danish based station with studios in Belgium. (10.12.2008)