Kurdish demonstrators clash with Turkish police | Europe | News and current affairs from around the continent | DW | 27.12.2009 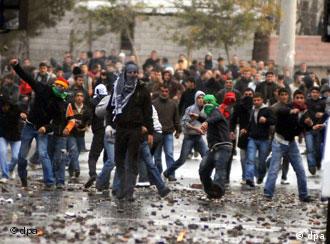 Kurdish protests have stepped up since October

News reports say eight protestors were hurt and a dozen others were arrested after clashes between Kurdish protestors and Turkish police. The demonstrations were in response to last week's arrest of Kurdish officials with alleged ties to Kurdish separatists. Clashes between masked youths and riot police broke out in the towns of Hakkari and Yuksekova, in southeastern Turkey. Two police officers are reported to be among the injured.

Last Thursday, Turkish police rounded up 31 people, including eight Kurdish mayors, as part of its investigation into the Kurdistan Workers' Party (PKK) and its off-shoots. Earlier this month, the pro-Kurdish Democratic Society Party was banned from government for its alleged links to the PKK.

The PKK, which has been fighting an insurgency for Kurdish independence since 1984, is considered a terrorist organization by Ankara and much of the international community. The PKK's fight with the Turkish government has claimed roughly 45,000 lives.

Kurdish protests have stepped up since October, first over the prison conditions of PKK founder Abdullah Ocalan, and more recently over the banning of the Democratic Society Party.

Turkey, in its bid to join the EU, has pledged reforms for the Kurdish minority in the hope of easing tensions.

Turkey cracks down on Kurdish activists

Turkish police crack down on banned party with scores of arrests

Turkish police arrested more than 30 members of a Kurdish political party that was outlawed earlier this month. Those detained on the grounds of links with a militant group included local mayors. (24.12.2009)