Kristallnacht pogrom: The world was watching

In the night of November 9, 1938, Jews were the victims of pogroms carried out in plain sight. Thousands of synagogues, shops and homes were destroyed. While the world was shocked, the reactions weren't strong enough.

"I can still clearly remember the morning of November 10," said W. Michael Blumenthal. "My father was arrested early in the morning. Amid the commotion and despite the fact that my mother had forbidden me to do so, I went outside without being noticed. I saw the broken shop windows on Kufürstendamm boulevard and smoke coming out of the synagogue on Fasanen Strasse." Blumenthal was only 12 years old at the time. 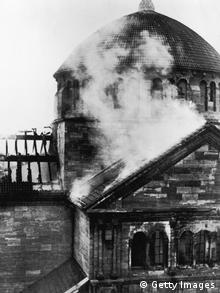 In the night of November 9, 1938, Jews throughout Germany and Austria were the victims of riots: 1,300 synagogues and 7,500 businesses were destroyed and countless Jewish cemeteries and schools were vandalized.

The police watched as Jews were humiliated in the street, beaten, and in at least 91 cases, murdered. The local fire departments did not stop the synagogues and Jewish shops from burning; they merely prevented the flames from spreading to neighboring buildings.

And that was only the beginning. On November 10, approximately 30,000 Jewish men were taken to the concentration camps in Dachau, Sachsenhausen or Buchenwald. 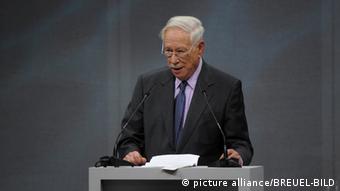 W. Michael Blumenthal was US finance minister in the 1970s and director of the Jewish Museum in Berlin for 17 years

W. Michael Blumenthal's father was among them. "I still remember my mother's words when he was taken away by two policemen: 'What's going on, what are you doing with him, what has he done, where is he being taken to?' Even as a 12-year-old, you can feel the fear of adults."

The rest of W. Michael Blumenthal's family managed to flee to Shanghai in 1939. It was the only country at that time that still allowed refugees to come in without a visa. Blumenthal wrote about the experience in his memoir, From Exile to Washington: A Memoir of Leadership in the Twentieth Century, 2014.

Why did it happen on November 9?

Physical attacks and intimidation targeting Jews was already widespread in Germany ever since the Nazis seized power in 1933.

The Nuremberg Laws established in 1935 defined who was to be considered a Jew, and many people suddenly faced a professional ban. Other laws restricted their access to public spaces. Many Jewish properties were expropriated to be "aryanized."

Yet, "It is important to understand November 1938 as a turning point in history," said historian Raphael Gross, president of the Deutsches Historisches Museum in Berlin. "After 1938, what is known as the epoch of German Jewry was over. German society was different afterwards."

The pretext the Nazis needed to justify the pogrom came when a Jewish teenager, Herschel Grynszpan, assassinated the German diplomat Ernst vom Rath on November 7 in Paris.

Immediately after German radio reported about the crime, anti-Jewish riots broke out in some German cities. However, systematic riots began throughout Germany two days later — after Hitler personally gave the order. 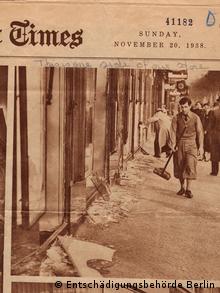 A report in the New York Times

From Munich, where the entire Nazi leadership had gathered for the anniversary of the 1923 Beer Hall Putsch, the Nazi Minister of Propaganda Goebbels wrote a speech in which he decreed that Jewish businesses should be destroyed and that synagogues be set on fire. Police were instructed not to interfere with the riots, and firefighters were only to protect "Aryan" property. Looting was prohibited.

The orders were applied that very night, not only in Berlin, but also in Cologne, Hamburg, Frankfurt, as well as in small towns and villages throughout Germany. "For different reasons, Germans either participated or looked away," said Blumenthal. Not everyone agreed with what had happened, but "many just sheepishly watched in silence."

"The November 1938 pogrom was carried out in plain sight; it could be seen by everyone — by the press of the world, foreign diplomats and all citizens," pointed out historian Raphael Gross.

Despite the official interdiction, looting also took place on November 9 and 10. One report by the Brazilian Embassy Counselor mentions gangs of young people showing objects of cult stolen from synagogues.

For example, the Polish Consul General in Leipzig described the fate of the Polish Sperling family: "Sperling's wife was stripped naked and thugs tried to rape her."

The Latvian ambassador wrote: "Kurfürstendamm looked like a battlefield." The Finnish representative noted "devastating criticism" from the population. "I am ashamed to be a German," was a very common statement among the public, the report stated. 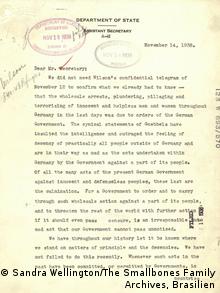 Frankfurt-based British diplomat Robert T. Smallbones not only reported on the situation, he also emitted thousands of visas to allow German Jews to flee to England

How the world reacted

The diplomats however did not send concrete demands or proposals for action to their home governments. "They were waiting and deceptively hoping that they could somehow come to terms with the Nazi regime," said Hermann Simon. "In that respect, the response to the reports was relatively low."

There were at least some international reactions, according to Raphael Gross: "The Kindertransport program to England began in the wake of November 1938. Some states did react, but it was far too little."

The fact that the Nazis were planning to murder all the Jews in the world was not foreseeable at the time, according to Gross.

The Italian embassy wrote on November 16, 1938: "It is not conceivable that one day 500,000 people [the approximate number of Jews living in Germany] will be sent to a wall, sentenced to execution or suicide, or that they will be locking into huge concentration camps." A fatal misjudgment of the situation.

November 9 is remembered both positively and negatively in Germany. Celebrations mark the fall of the Berlin Wall in 1989, but more somber events commemorate an anniversary of Nazi brutality. (09.11.2015)

Germans are commemorating the 79th anniversary of Kristallnacht, the Nazi-inspired nationwide pogrom against Jews. Politicians in Berlin are hoping to rebuild a synagogue on the spot where Germans destroyed it in 1938. (09.11.2017)