A funeral ceremony for the slain prominent Russian opposition figure Boris Nemtsov has taken place in Moscow. His assassination has shocked the country. 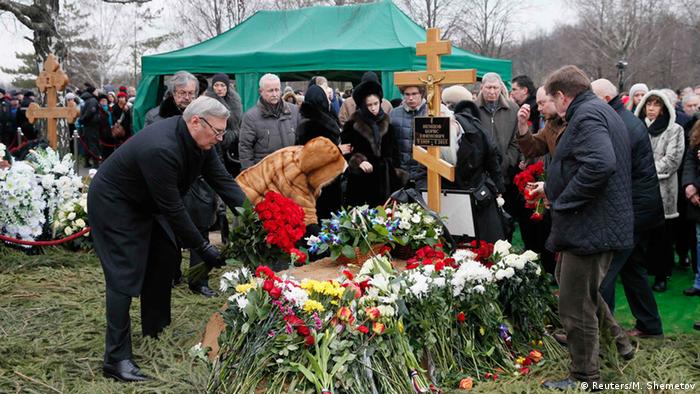 The body of slain opposition figure Boris Nemtsov was buried in Troyekurovskoye cemetery at Moscow's western edge after thousands came to see his body lying in state, leaving flowers and candles behind in honor of "our ray of light," as one mourner put it. A Russian orthodox priest chanted over his coffin as it was lowered into the grow while family members and around 100 bystanders looked on.

Earlier, thousands of mourners filed by Nemtsov's coffin as he lay in state at a human rights center in central Moscow named after the Soviet dissident Andrei Sakharov. So many came, that when the viewing ended after its scheduled four hours, a line of people hundreds of meters (yards) long still waited outside the Sakharov Center.

Among those standing by the casket were Nemtsov's 87-year-old mother Dina Eidman, his children, and his widow.

Other mourners included dignitaries such as Naina Yeltsina, the widow of former president Boris Yeltsin, under whom Nemtsov was deputy prime minister. In a conciliatory gesture from the Kremlin, Deputy Prime Minister Arkady Dvorkovich also joined the queue of those paying their respects in the hall.

Former British prime minister John Major and US ambassador John Tefft were among the foreign dignitaries to arrive for the funeral.

European dignitaries barred from Russia ahead of the ceremony

The European Union has, however, criticized Russia for denying entry to EU parliamentarian and former Latvian foreign minister Sandra Kalniete and preventing her from attending the funeral.

The move was "a clear breach of basic principles" running counter to visa agreements between Russia and the EU, a spokeswoman for EU foreign policy chief Federica Mogeherini said, labelling as not "credible" Russia's justification for the move - that Kalniete represented a threat to the public order of Russia.

Poland said the speaker of its upper house of parliament, Bogdan Borusewicz, was also prevented from attending, as was an opposition activist Alexei Navalny, who is currently serving a 15-day jail sentence.

Nemtsov was gunned down by unknown attackers just before midnight on Friday while walking over a bridge near the Kremlin with his girlfriend, Ukrainian model Anna Duritskaya. 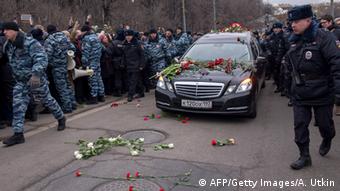 Boris Nemtsov had been a deputy prime minister under President Boris Yeltsin and was widely seen as a rising young reformer.

However, in the Putin era Nemtsov's party lost its seats in parliament. Although his influence in mainstream politics vanished, Nemtsov remained visible as one of Putin's most vehement critics. Just a few hours before his death, he conducted a radio interview in which he denounced Putin for his "mad, aggressive" policies in the Ukraine crisis.

German Chancellor Angela Merkel, citing Nemtsov's murder, urged Russia to push for freedom of expression. "We expect everything to be done to clear up this murder. I hope and we will make clear that we want those people who think differently in Russia to have a chance to articulate their thoughts - though I know it is anything but easy," Merkel told reporters at a news conference with the president of Mongolia.

Putin himself has called the murder a "provocation" and a "contract killing," and promised to find Nemtsov's assailants.

Since Putin came to power in 2000, a number of prominent opposition figures have been murdered, including journalist Anna Politkovskaya and activist Natalya Estemirova.