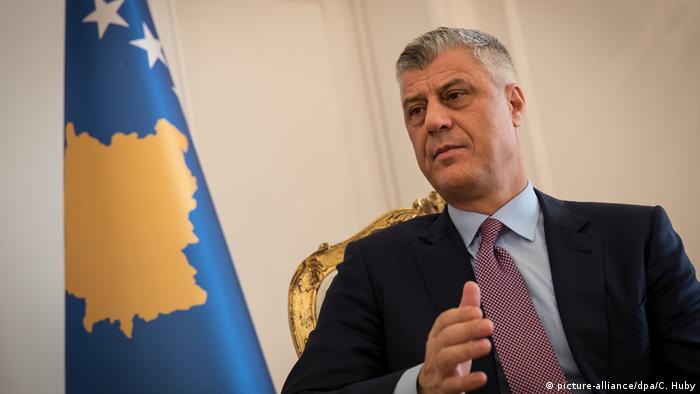 The president of Kosovo, Hashim Thaci, was in detention in The Hague on Thursday to face an indictment at a war crimes court.

Thaci, a former senior leader of the Kosovo Liberation Army (KLA) guerrilla group, resigned from his top post just hours before at a press conference in the capital Pristina.

He added that the head of Kosovo's parliament with serve as acting president until a new one is elected.

Thaci said he took the decision after an indictment against him was confirmed by a judge at the Kosovo Specialist Chamber in The Hague. The tribunal was set up to try alleged war crimes during the 1998-1999 conflict with Serbia that won Kosovo its de-facto independence.

A spokesman for the prosecutor in The Hague told The Associated Press that he had no comment on Thaci’s announcement.

Top officials travel to The Hague

Thaci is one of several politicians who have been indicted for crimes that include murder, enforced disappearances, persecution and torture.

Among them is also a former parliament speaker, Kadri Veseli, who also said that he has been issued an indictment by a pre-trial judge.

Three other former commanders of the separatist Kosovo Liberation Army that fought for independence from Serbia have been charged with war crimes by the court and an associated Special Prosecutor's Office established five years ago.

Thaci and three fellow suspects were "transferred to the detention facilities of the Kosovo Specialist Chambers" in the Dutch city, the court said.

Read more: Kosovo: Trying for a normal life in a divided city

Exact details of the 10-count indictment against Thaci, Veseli and others have not been released. Announcing the existence of the indictment earlier this year, the Specialist Prosecutor's Office alleged that Thaci and others were "criminally responsible for nearly 100 murders."

Thaci has repeatedly denied any wrongdoing, saying that he is voluntarily attending the trial to prove he broke no international rules.

With its majority Albanian population, Kosovo had been a province of Serbia before the Albanians rebelled against Belgrade's rule. A series of guerrilla attacks quickly expanded into a war that was marked by a brutal crackdown by Serbian forces.

More than 10,000 people died in the Kosovo conflict, most of them ethnic Albanians. The fighting ended after a 78-day NATO air campaign in 1999 that forced Serbian troops to retreat.

Thaci has been president since 2016 having previously served as prime minister. In recent years he has taken part in talks aimed at normalizing ties with Serbia, which still rejects Kosovo's independence.

Hashim Thaci's past catches up with Kosovo's future

The war crimes indictment against Hashim Thaci went public at precisely the wrong moment — the Kosovo president was on his way to a much-hyped US summit with Serbian leaders. The move might be enough to kill the talks.

The 38-year-old charismatic leader received backing from the parliament in a vote boycotted by a Serb party. Ex-President Hashim Thaci vacated the post in November after being charged with war crimes.

The man who oversaw Kosovo's quest for independence has appeared in court for the first time on war crime charges. Thaci, who quit as president abruptly last week, pleaded not guilty.

The trial of a former commander of the Kosovo Liberation Army has begun at the Special Tribunal for War Crimes during the Kosovo War. Salih Mustafa is the first defendant to stand trial before the tribunal.