Hosts India got their first win of the 2016 T20 Cricket World Cup thanks to a stunning innings from Virat Kohli. They beat Pakistan by six wickets in a low scoring encounter in Kolkata. 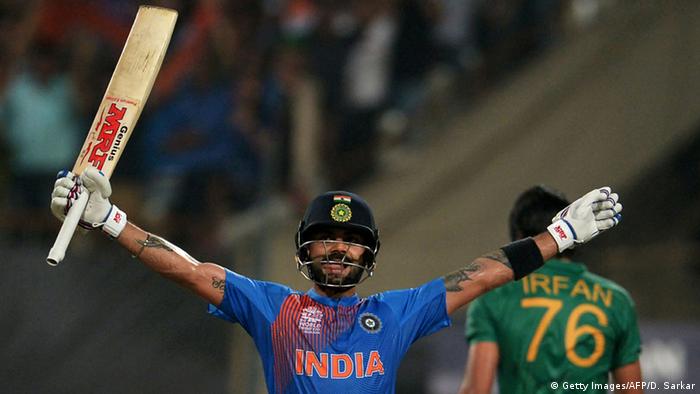 After a shock loss to New Zealand in their opening match of the tournament, India went in to Saturday's game knowing a loss would almost certainly mean an exit at the group stage.

Following a rain delay the match was reduced to 18 overs a side and Pakistan struggled batting first on a surface not well suited to attacking batting. They went at less than a run a ball for the first six overs of the innings before late contributions from Shoaib Malik (26) and Umar Akmal (22). However, their total of 118-5 didn't look enough to trouble a strong Indian batting line up.

And so it proved. Although they suffered the loss of some early wicketss, India rarely looked threatened once Kohli, who was named man of the match, arrived at the crease. His unbeaten 55 from 37 balls was cool and decisive in front of the 60,000 partisan fans packed in to Eden Gardens.

India have beaten Pakistan in every match the side have contested at both T20 and 50 over World Cups, a run now stretching to 11 games. Many spectators and players both past and present suggested the slow wicket was unsuitable for the highest profile game of the group stages but Kohli said it providied a different type of test.

"It was a challenging wicket out there but that's what you need as a cricketer, you need new challenges, every innings you play," he said. "It was just about keeping calm and trying to work it out, how to go about it... you need to watch the ball, to play it late."

Indian skipper MS Dhoni, who scored an unbeaten 13, lauded his teammate for having "the hunger to perform" on such a big stage, with more than 60,000 in the stadium and hundreds of millions watching on TV.

"His biggest plus - he takes everything as a challenge," Dhoni said of the man who has already succeeded him as India's Test captain.

Fresh off their winning exploits against Bangladesh, Pakistan's skipper Shahid Afridi promoted himself to number three but could only score eight this time round.

"I was not expecting a pitch like this but no excuse, we were short by 30-35 runs," Afridi said.

"Their bowlers bowled really well," he added, "especially their spinners. And Virat Kohli played an awesome innings under pressure."

"Credit to Virat," said the Pakistan star. "He was the only difference between the two teams."

It's less than a decade old but the ICC World Twenty20, better known as the T20 World Cup, ­has captured the imagination of cricket fans. Here are 10 things to look out for as the Super 10 stage gets underway. (14.03.2016)

A controversial ban imposed by the Indian Premier League on Sri Lankan cricketers playing in the state of Tamil Nadu appears to outsiders a lot like cutting off your nose to spite your face. (19.04.2013)