For months, global media followed the battle between 'IS' and Kurdish forces in the Syrian city, Kobani. Today, with IS pushed to the countryside, there is scant attention for a city that was nearly obliterated. 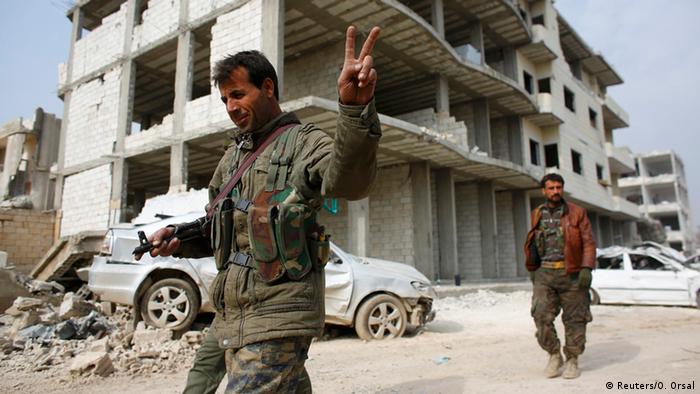 On an overcast afternoon in central Berlin, a few steps from the city's upscale boutiques and glass-fronted parliament buildings, Idriss Nassan Alirahim, a soft-spoken man dressed in an immaculate suit, tried to put on a brave face when he recalled the death and destruction back home. His house, he said, had been almost completely destroyed by 'Islamic State' extremists. Daysh fighters, he said, using the term many Arab speakers use for the militants of the self-proclaimed 'Islamic State,' (IS), had burned everything in the house.

"They left only one room." He shrugged: "Maybe because they were living in it."

Nassan's home in the mostly Kurdish city of Kobani,was besieged by fighters of the extremist group trying to overrun the small autonomous Kurdish enclave. During five months, as media outlets watched the smoke rise from the city from the nearby Turkish border, Kurdish and Islamist fighters battled in the city's streets and thousands of residents fled. The besieged city quickly turned into a powerful symbol of the broader fight against the militants which had swept across large swathes of Syria and Iraq.

In January of this year, the city's defendants, supported by Kurdish fighters from Northern Iraq and US-led airstrikes, finally managed to push IS out of the city, marking the biggest defeat for Islamic State in Syria.

They left behind a city that lies in ruins. “Between 70 and 80 percent of the city is destroyed and the infrastructure is damaged”, Nassan, who acts as the city's deputy foreign minister, said. While many shops have reopened, including a central bakery, and there are some medical units, including one run by Doctors without Borders, there is still no running water or electricity for the refugees returning to Kobani, he added. "We are pumping water from local wells, but that is not enough," he shrugged. Another problem, he said, was the lack of fuel: "We only have very small amounts." 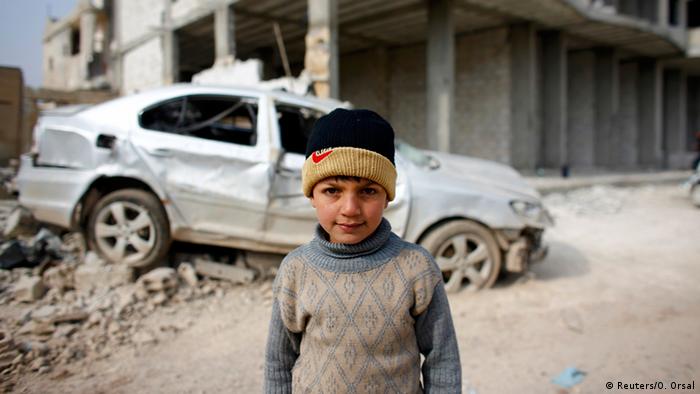 Kobani, shortly after its liberation in January 2015.

But worse still, very little humanitarian aid, or building materials are coming into his city, Nassan said. The Turkish authorities, he said, are unwilling to open the borders to the enclave controlled by Kurdish fighters of the YPG, a Syrian offshoot of the PKK, the left-leaning Kurdistan Workers Party which, until recently, waged a guerilla war against the Turkish state.

Moustafa, a resident in Kobani who prefered to only go by his first name told DW in a phone interview, that Turkish border guards only allowed people to enter Kobani, but not to return. "People who want to go back to Turkey have to pay smugglers, sometimes as much as 100 dollars."

'IS' remains a threat

That is why Nassan, who said he had to be smuggled out of the Syria, and other Kurdish politicians are pushing for international pressure on Turkey. “The international community should open a humanitarian corridor”, Nassan said.

The Kurdish fighters, he added, were also in need of weapons. While they had managed to capture some of the weapons left behind by the militants, “we need anti-tanks and anti-mortars.”

IS remains a real threat: On Sunday, Islamic State militants staged a surprise attack on the southern outskirts of Kobani, according to the Syrian Observatory for Human Rights, based in London.

But Nassan insists that the city has become safer, "much safer."

Mr Nassan, how is daily life in Kobani?

However, he conceded, that the city was struggling to survive against the odds. "We are in need of help from all sides to save peoples' lives and provide them with essential items." Local resident Moustafa told DW that prices for staples had doubled in Kobani.

Back in Berlin, Nassan sighed: The international community, he feared, had forgotten Kobani, the city that was once such a powerful symbol in the fight against IS. Now that the military struggle was largely over, "somehow the humanitarian side is not as important to them."

But, he added after a pause, he was hopeful that help would eventually reach Kobani and the city would be rebuilt. Until then, he would continue to live with his family in the one remaining room in his house.

But even though it was all they had, he was happy, he said, smiling, "because we liberated the house from these terrorists."

Turkey's Kurds await a historic declaration from Abdullah Ocalan, the jailed Kurdistan Workers' Party leader. Is it the last chance for peace between Ankara and its frustrated Kurds? Noah Blaser reports from Istanbul. (20.03.2015)

Now that "Islamic State" fighters have been pushed out of Kobani, the first refugees are crossing over the Turkish border to return to the destroyed city - and those Syrians who stayed. Kamal Sheikho reports from Kobani. (23.02.2015)

Kurdish officials say a young German woman has died in battle against IS jihadists in Syria. Nineteen-year-old Ivana Hoffman was reportedly a member of the Marxist-Leninist Communist Party in Turkey. (09.03.2015)