Klaus Staeck on Böhmermann case: 'A big mistake for Merkel'

Intellectuals in Germany have criticized Chancellor Merkel's decision on the Böhmermann case. Klaus Staeck, former president of the Berlin Academy of Arts, accuses the chancellor of caving in to the Turkish president. 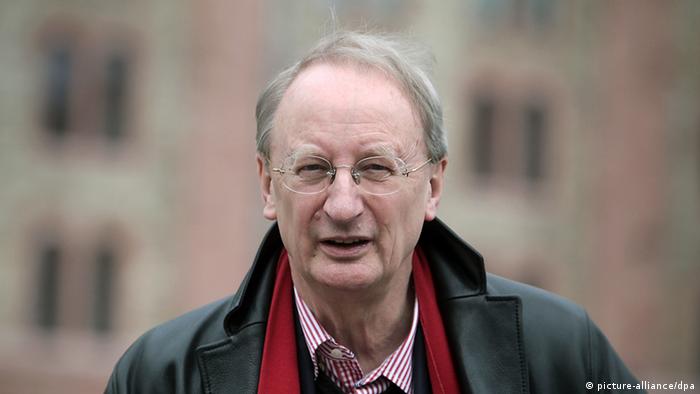 DW: The German chancellor has authorized an investigation of satirist Jan Böhmermann. What is your reaction?

Klaus Staeck: I was anticipating that. The chancellor had already made a mistake when she claimed that the Böhmermann satire was deliberately hurtful. To that, she has now added another big mistake. She was in a bind and had to choose between Mr. Erdogan and freedom of expression. To get out of the dilemma, she opted for Mr. Erdogan.

More concretely, what is Merkel's mistake?

We have a separation of powers. We have courts that decide for us if something is an insult. I've personally had the "pleasure" to stand trial 41 times because of my satirical work. Luckily, I have always been vindicated. Therefore, I have also always had great confidence in the courts.

In Mr. Böhmermann's case, it remains to be seen whether there will be a trial at all. Prosecutors must first file charges. I nevertheless believe that Mr. Böhmermann stands a good chance of winning in a German court. They've always been very protective of freedom of expression, at least so far.

Your predictions in the Jan Böhmermann case sound optimistic, but you have also criticized his poem as being "below the belt."

The question is not whether the poem is good or bad satire. I do not know if it has earned its stars in the satire hall of fame, yet I'm on Böhmermann's side, regardless of how good or bad I think this poem is. Freedom of expression outweighs these considerations. One way or another, Mr. Böhmermann has a legitimate claim.

Do you believe this decision restricts freedom of opinion and artistic expression in Germany?

The decision shows the weakness of the government and of Mrs. Merkel herself. Whether this case will weaken freedom of expression remains to be seen. It would be a disaster if someone who tramples freedom of expression in his country were able to prevail over a democratic country on this issue. It's terrible to even think about it.

But in this case, I'm convinced that the judge will decide in favor of freedom of expression. That is the supreme value to be considered here, and not Mrs. Merkel's dependence on Turkey for the refugee deal. To save it, we're obviously showing servile deference. That's the real background of Merkel's decision.

Was the chancellor stuck in a dead end?

Yes, and she is still stuck now. The decision was passed on to the courts, where it ultimately belongs. Through her hasty condemnation of the poem, Mrs. Merkel has already given her rating, which certainly encouraged Mr. Erdogan to lodge his complaint.

You have also faced trial because of your provocative work. What are your recommendations for Jan Böhmermann now?

Stay calm and avoid self-censorship: That would be the absolute wrong way to go. Satire cannot exist without risks. Everyone in this job knows that. Beyond that, look at all of the expressions of solidarity Mr. Böhmermann is getting now - I wish I had had that kind of support during my trials.

Klaus Staeck, born in 1938, is a German graphic designer, cartoonist and lawyer. He was president of the Academy of Arts in Berlin from 2006 until 2015.

German comedian Jan Böhmermann has not signed a "cease and desist" letter, increasing the likelihood that the case may be taken to court. German broadcaster ZDF has defended his controversial poem to prosecutors. (14.04.2016)

Satirist Jan Böhmermann’s obscene poem about the Turkish president is dominating headlines both in Germany and Turkey. We sum up the response from Turkish media. (13.04.2016)