From Quentin Tarantino classics to the latest Marvel blockbusters, DW's KINO team of Scott Roxborough and Hans Christoph von Bock pick the top actors from Germany mixing it up in Hollywood.

There was a time when the only role for a German actor in Hollywood was playing the third Nazi from the left. Yes, Berlin-born Marlene Dietrich was one of the biggest stars of her era but in her wake, few German actors in Tinseltown made it past bit roles or playing the baddie in James Bond films.

No longer. A new generation of German performers is getting noticed outside the borders of Berlin, Munich and Cologne. And, for the most part, they're doing it without resorting to tired stereotypes. 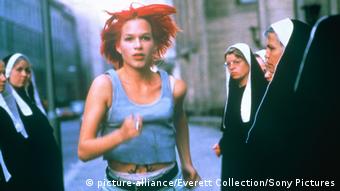 For the latest edition of KINO Favorites, we take a closer look at seven stars who have made the leap from Germany to Hollywood. It's an impressive lineup, including a multi-Oscar award winner, a star of both the catwalk and the silver screen, and a woman who's appeared in four of the top-grossing films of the past three years. Few have become household names (yet), but all have carved out impressive careers.

No two success stories are the same. Our magnificent seven have each made their own way — by breaking out with a local art house hit, by moving from walk-on roles in German TV to standout parts in Marvel blockbusters, or by slugging it out for decades in German melodramas before becoming an "overnight success" courtesy of Quentin Tarantino. One even made her name first in Paris and Hollywood, before returning home for the most ambitious role of her career.

To a man and woman, our seven international stars have successfully avoided the worn trope of the German as a boilerplate villain. When one of them plays a Nazi — and a few have — they give depth and character to roles that, in years past, would have been little more than cardboard cutouts. Most steer clear of the cliche altogether, preferring to play the sidekick, the love interest or, occasionally, even the hero.

This new generation of German stars has also, for the most part, mastered the trick of balancing Hollywood roles with more meaty fare back home. Far from abandoning the German scene, almost all of the names on our list have avoided the trap of getting typecast by continuing to try out different, and often more challenging work, in German films and TV.

So have a look and tell us what you think. Anyone we left off you think deserved to make the cut? Who would top your list of the best Germans who've gone Hollywood? Let us know at kino@dw.com.

From Alexandra Maria Lara to Daniel Brühl, these actors got their start in German cinema and television before making the leap to the global cinema stage — and international fame. (08.06.2018)