Killings of high-profile women in Iraq spark outrage | Middle East | News and analysis of events in the Arab world | DW | 02.10.2018

Several prominent women have been killed in Iraq over the past few weeks. The murders have sparked a discussion about whether Iraq is doing enough to protect women Iraqi society is growing anxious after several recent murders of renowned women. The most recent killing was Tara Fares, an Instagram beauty star and former Miss Baghdad, who was gunned down by two motorcyclists while at the wheel of her white Porsche convertible on Thursday. More than 2.7 million people followed her Instagram account, where she often modeled Western outfits and criticized double standards regarding women in Iraq, which made her a target of insults from some.

Just two days before Fares was killed, the rights activist Suad al-Ali was shot at an outdoor market in the southern city of Basra. In August, Rafif al-Yasiri, a plastic surgeon, and Rasha al-Hassan, a cosmetologist, were found dead in their homes, with the causes of their deaths remaining officially undetermined. On Saturday, Shimaa Qasim, a model who was former Miss Iraq, uploaded a video where she tearfully said that she had received text messages saying "you're next" after the killing of Fares.

"The views towards the killing of these women is mixed," Alison Pargeter, a Middle East expert and senior research associate at the Royal United Services Institute in the UK, told DW. "While many Iraqis are dismayed and horrified at the attacks, others are not overly perturbed, with some believing that these women somehow deserved what they got for transgressing social norms," she said. Pargeter added that the Iraqi media are also trying to link some of the women to the sex industry in order to justify the killings.

Prime Minister Haider al-Abadi ordered an investigation, saying there was an "organized plan" behind these crimes. He has directed the Interior Ministry and intelligence services "to immediately and within 48 hours work and focus on efforts at the national level to obtain information and take measures regarding the crimes of assassination and abduction happening at a high level in Basra and Baghdad provinces and other places simultaneously," according to a statement released Friday. 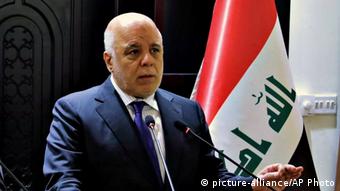 Al-Abadi has called on an urgent investigation into the killings, yet some are still skeptical

"There are people who don't want Iraq to develop, or for women to be visible," Safaa, a stylist who asked that her real name not be used, told the news agency AFP. "They want to take us backwards," she added. She said she also believed that an "organized network" was behind the attacks.

Hanaa Edwar, a member of the women's rights group al-Amal, told AFP that she believes the investigation into the killings might already be compromised. "Armed groups, tribes, criminal gangs ... all control positions" within the state and security forces, she said. "Attacking women who are public figures is a bid to force them to shut themselves away at home," she added.

Pargeter believes that the deaths will have "no impact" on the way women are treated and perceived in Iraq. "Even within the political class, there are elements who may not applaud the killings, but who still consider the women to be responsible for their own deaths through their willingness to challenge societal norms and traditions," she said.

Dina Mansour-Ille, a senior research officer at the Overseas Development Institute in the UK, told DW that Iraq needs to have an open conversation about the role of women in society. She believes that the government should do more to raise "awareness of women's rights and bring it to the forefront." She pointed out that Iraqi lawmakers are still proposing legislation that is detrimental to the status of women in the country. For example, last November there was a proposed amendment that would lower the age at which girls could be married to 9. 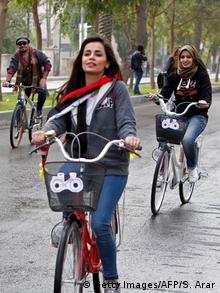 Conservatives even disapprove of women who cycle in public

Mansour-Ille said women in Iraq needed more outlets, such as public forums, for voicing their concerns. "Iraq, or any Arab society for that matter, should explore the role of women in society and how they can empower women," she said. "What do women in Iraqi society want?"

Pargeter was not optimistic that the issue would be resolved soon. "Iraqi society is still a long way from being ready to accept the idea of women who defy gender roles in this way," she said. "Despite the current outcry, therefore, these killings are likely to be ignored by the establishment and the killers are unlikely to be brought to justice."