A former chairman of the Social Democrats suggested on public radio that German workers, just like their French counterparts, should kidnap their boss if they're worried about their future. 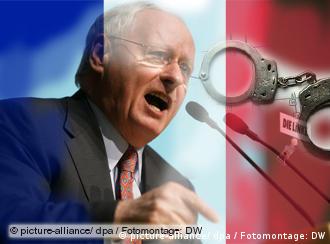 The leader of Germany’s Left party has urged German workers to copy the example of disgruntled French counterparts and kidnap their bosses.

Several managers in France who announced restructuring measures to deal with the economic crisis have been detained in factories in recent weeks by employees who fear losing their jobs. Managers from companies in France, including Molex, Sony, 3M and Hewlett-Packard, have all reported "bossnapping" incidents.

"When the government continues to do nothing, there is increasing danger that the far-right will gain in strength," warned Oskar Lafontaine on public radio WDR. The Left party has also been calling for national strikes to be legalized again.

Despite these warnings, experts see there is little risk of serious social unrest and mass protests breaking out in Europe's biggest economy.

The Left party was established two years ago and is made up largely of former East German communists and disaffected Social Democrats, including its former chairman Oskar Lafontaine. He quit former Chancellor Gerhard Schroeder's cabinet because he found its policies too centrist.

Lafontaine's "bossnapping" suggestions have received unexpected support from the Social Democrat presidential candidate Gesine Schwan who "warned of growing anger throughout the country."

She was immediately sharply criticized from within her own party for scaremongering and spreading excessive pessimism. "The economy is doing badly, but we are a long way from social unrest," warned SPD colleague, Dieter Wiefelspuetz.

"It doesn't do anyone any good to be talking about unrest erupting here or in France or anywhere else," said Peter Struck, the head of the Bundestag faction of the Social Democrats. "That is undermining efforts by the federal government which is doing everything possible to help make it easier for people to get through the crisis."

German Chancellor Angela Merkel said at a meeting of senior Christian Democrat party officials that she does not share the concerns that social unrest will break out. "It is totally irresponsible to encourage panic and fear and to predict things that do not correspond with reality," she said.