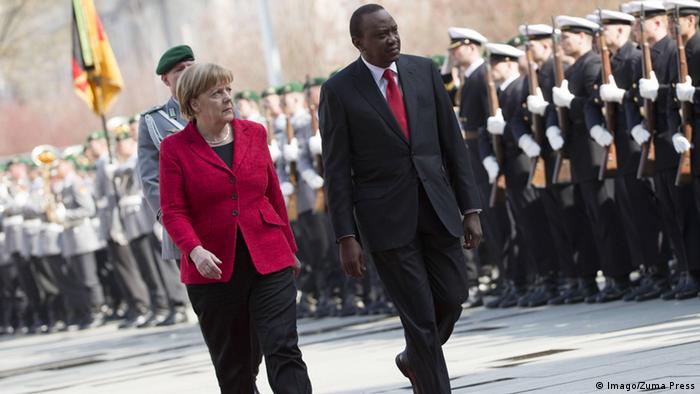 Kenyatta met with Merkel in the German capital on Wednesday amid growing concern in Europe over terrorism in the wake of last month's attacks in Brussels.

The Kenyan president emphasized that combatting terrorism was a joint African struggle, acknowledging the presence of extremists in countries like Nigeria and Mali, as well as Kenya itself.

"Now it's becoming clearer to us that many groups cooperate with each other," Kenyatta said. In response, he said, the African Union (AU) must do a better job of exchanging intelligence information.

The chancellor, meanwhile, praised Kenya's peacekeeping efforts in neighboring Somalia, where the militant group al-Shabab is based. In retaliation for the Kenyan government's presence in the country, al-Shabab has engaged in several deadly terrorist attacks in Kenya.

The Kenyan president was once accused of war crimes by the International Criminal Court (ICC) following his country's elections in 2007. A trial never materialized, however, because of a lack of evidence.

Merkel emphasized the need for stronger ties, saying that over the years Europe has "forgotten [Africa] a bit."

"China has filled this gap," she said. "We're very interested in this changing that again."

A friend to Germany - sometimes

"President Uhuru Kenyatta's visit is a clear sign that Germany and Kenya want to strengthen their ties which had loosened in the past," DW's African affairs correspondent Daniel Pelz said in Berlin.

Traditionally, Germany and Kenya enjoy a close relationship. Germany was the first country to recognize Kenya after its independence in 1963, and Kenya is a major trading partner of Germany in Africa and a popular destination for German tourists. It is also a major recipient of German development aid.

But a visit by President Kenyatta to Germany seemed unlikely until recently. The ICC had accused Kenyatta of being behind the ethnic violence that rocked the country after the general elections in December 2007. After Kenyatta was elected president in 2013, relations between Kenya and many Western nations soured. In December 2014, the charges against the Kenyan president were dropped.

"Germany views Kenya as a beacon of stability in a troubled neighborhood," said Pelz. As well as battling al-Shabab militias in Somalia, the country has mediated in a number of regional conflicts. "At the same time, there are a number of issues where both governments have very different views," said Pelz.

Kenyatta has been at the forefront of an aggressive campaign against the ICC, calling it "a vehicle that has strayed off course to the detriment of our sovereignty, security and dignity as Africans."

Germany, on the other hand, is one of the ICC's main backers.

Kenyans: ‘We still have IDPs to this day’

It was what Kenyans had waited for with bated breath. Would Deputy President William Samoei Ruto’s trial in The Hague continue or would he be free at last? This is how Kenyans reacted to the news of the mistrial. (06.04.2016)

The International Criminal Court has dismissed the trial against the Kenyan leader for lack of evidence. The two were accused of fomenting ethnic tensions leading to over 1,000 deaths after the 2007 elections. (05.04.2016)

A report by Kenya's Ethics and Anti-Corruption Commission (EACC) has revealed that graft is permeating all levels of society. It states that Kenyans even offer bribes for public services such as death certificates. (16.03.2016)