Eliud Kipchoge ran the fastest marathon ever on Saturday but didn't set a new world record. The Kenyan broke the two-hour mark, having compared it to being "the first man on the moon," but these weren't race conditions. 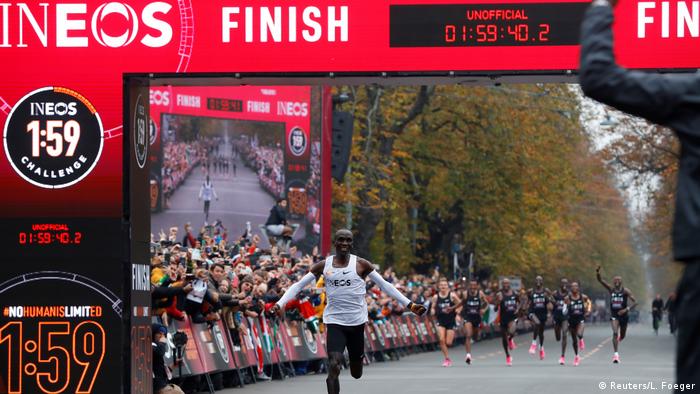 As a pack of high-caliber distance runners approached the finish line on the long straight, flat freshly-relaid tarmac of Vienna's Hauptallee, most of them peeled away, allowing the man in white in the middle of the pack to cross the line alone.

As Eliud Kipchoge crossed that line to the screams of the crowd he pointed to the air, clapped his hands, beat his chest and embraced his wife, who was watching him race for the first time. He knew he'd made history. A quick look at the clock confirmed it: 1 hour 59 minutes and 40 seconds.

"I am feeling good. After Roger Bannister [broke the four-minute mile] in 1954 it took another 63 years, I tried and I did not get it — 65 years," Kipchoge said soon after the finish. "I am the first man — I want to inspire many people, that no human is limited."

Two years earlier, the Kenyan had fallen 25 seconds short of breaking the two hour mark to cover the 26 miles (42.2 kilometers) but on Saturday he always looked comfortable, recording consistent split times throughout.

"I can say I'm tired. It was a hard run," the 34-year-old added. "Remember, the pacemakers are among the best athletes in the world, I appreciate them for doing the job."

History, but not in the record books

While there's little doubt about the gravity of the achievement, it will not be a world record for three reasons: There were no other competitors, there were a rotating cast of pacemakers and Kipchoge was passed drinks from bikes rather than picking them up himself.

For those lining the straight, flat streets in and around the Prater park in Vienna, or watching on the YouTube stream, the significance of the achievement was obvious.

Athletics, and indeed most sport, is defined by measurements: the highest, the strongest, the fastest. And the significance of going under two hours was described by Kipchoge as being "like the first man to go to the Moon" before the run.

There's little doubt the Kenyan Olympic champion is the best marathon runner there's been. He has won 11 of his 12 races at the distance and holds the world record. But whether this achievement truly adds to his legacy, or to sporting history, is a point of some contention. 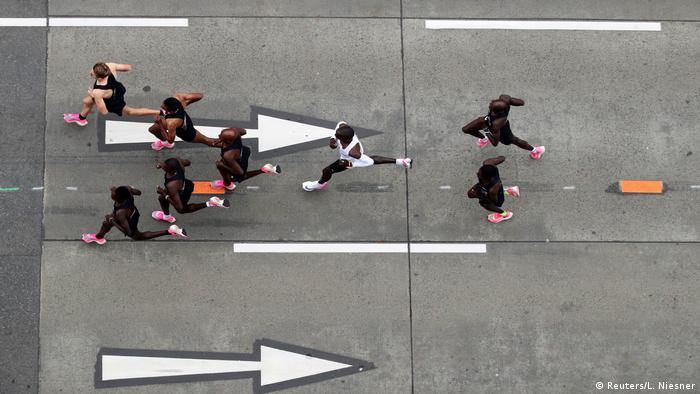 Eliud Kipchoge runs in between his pacemakers

Saturday's event was backed by INEOS, a chemicals company owned by Britain's richest man, Sir Jim Ratcliffe, who has recently acquired cycling's Team Sky and French football club Nice, among other sporting assets. INEOS have been criticized for the environmental impacts of their fracking activities and plastics production, but their support essentially meant money was no object in getting under the two-hour mark. Ratcliffe called it the last great barrier in athletics.

As such, Kipchoge benefited from the presence of 41 pacemakers, several of them Olympic medalists in their own right, taking turns to deploy themselves in such a way as to shield the Kenyan from the wind. Kipchoge also followed a car programmed to drive at the speed needed to break the barrier, while the venue and date were handpicked to optimize the chances of success.

Regardless of the record's official status, those crowding round the Kenyan at the finish line were in no doubt about the scale of the achievement.

Eliud Kipchoge is expected to make his second attempt at breaking the two-hour mark in the marathon in the autumn. Two years ago he missed out on achieving the feat by just 26 seconds. (06.05.2019)