Eliud Kipchoge is expected to make his second attempt at breaking the two-hour mark in the marathon in the autumn. Two years ago he missed out on achieving the feat by just 26 seconds. 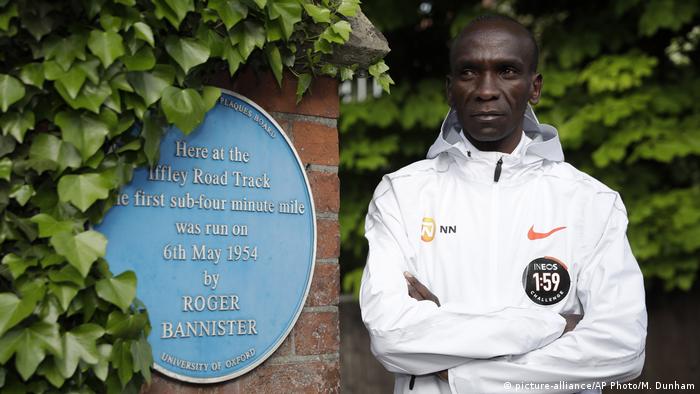 The Kenyan marathoner chose the 65th anniversary of Roger Bannister breaking the four-minute barrier for the mile to announce that he plans to make another attempt to break the two-hour barrier in the marathon.

"I want to unlock the thought that there are limitations in the human being," Kipchoge told The Associated Press at the Iffley Road track in Oxford, where Bannister made history on this day in 1954. "There are no barriers when you believe in yourself and try and trust in what you are doing."

The 34-year-old Kipchoge's first attempt to complete a marathon under two minutes came as part of the Nike-financed Breaking2 project at the Monza Formula One track in Milan on May 6, 2017, when he came up short by a mere 26 seconds.

'Proudest moment of my career'

"Running the fastest ever marathon time of 2:00:25 was the proudest moment of my career," Kipchoge said of the Monza attempt, which was not recognized as a world record because it wasn't conducted under regular conditions. He was paced by a lead car and had supporting runners taking part in stages, something that is illegal under the rules of the International Association of Athletics Federations (IAAF).

The Kenyan has confirmed that his second attempt, which has been dubbed "The 1.59 Challenge," will also be held under special conditions, meaning it too won't be sanctioned by the IAAF.

'Not about the IAAF'

"It's not about the IAAF, it's about history," Kipchope told The Guardian. "I really want to leave a big legacy."

Kipchope is already the world record holder, having run the Berlin marathon in a time of 2:01:39 last September.

Instead of Nike, this attempt, which is expected to be held in the autumn, is being sponsored by Britain's richest man,  Jim Ratcliffe, owner of chemical firm INEOS. He said they were still looking for a location, but expected it to be in London, possibly in one of the parks.

"If we have it in London it would need to be an iconic location that fulfils the performance criteria that's flat and has a good surface," Ratcliffe said after posing with Kipchoge for photos in front of a clock that read "1:59.00."

"It's one of those great challenges in the sporting world to try and break two hours," Ratcliffe said. "If he does succeed it'll be very inspirational for people. He's the finest marathon runner the world has ever produced and I think he's still getting better."

No concerns about doping

Ratcliffe, who has taken over the Team Sky cycling outfit and renamed it INEOS said he was also mindful about the risk of his company financing cycling and athletics, two sports that have had a history of doping issues.

"We probe quite deeply into that," he said. "I have no interest in cheating."

"This is the time to prove to the whole world that you can run in a positive way," he said, "and in a clean way and actually make history."