Raila Odinga has pulled out of the re-run of the presidential election scheduled later this month. Odinga said he wanted to allow for reforms that would deliver a "credible election."

Kenya's opposition leader Raila Odinga said on Tuesday he would not take part in the court-ordered re-run of the presidential vote scheduled to take place on October 26.

"In the interest of the people of Kenya, the region and world at large, we believe that all will be best served by (opposition grouping) NASA vacating the presidential candidature of elections slated for 26th of October, 2017," Odinga told a news conference.

President Uhuru Kenyatta said the presidential re-run, which was expected to be a run-off between Odinga and himself, would go ahead as scheduled despite his rival's withdrawal.

"There is nowhere the constitution says Raila Amollo Odinga has to be on the ballot,"  Kenyatta told his supporters.

A key Odinga ally has called for nationwide protests from Wednesday, raising fears of more clashes between police and demonstrators that have already left dozens dead since the August 8 vote.

The election commission said on Twitter it was meeting with its legal team and "will communicate way forward."

Odinga had been threatening to withdraw if his demand for the removal of six officials at the election board was not met. He blamed them for irregularities during the vote in August.

The opposition leader last month demanded "legal and constitutional guarantees," arguing that without these guarantees the new vote will be no different from the one nullified by the Supreme Court.

He called for criminal proceedings to be launched against the officials of the Independent Electoral and Boundaries Commission (IEBC).

"We have come to the conclusion that there is no intention on the part of the IEBC to undertake any changes to its operations and personnel... All indications are that the election scheduled for 26 October will be worse than the previous one," said Odinga. 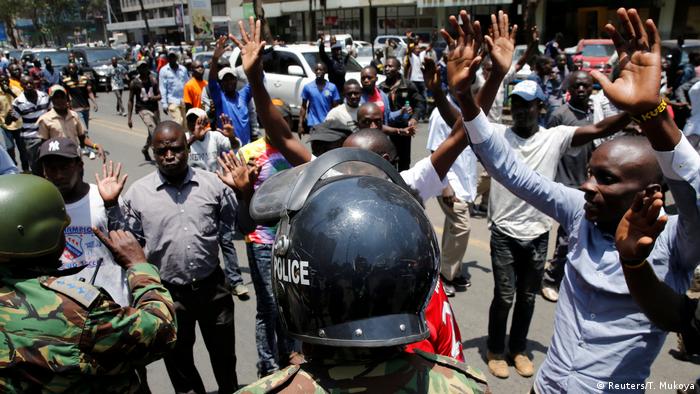 Last month, the Supreme Court nullified incumbent President Uhuru Kenyatta's win. The court accused the electoral board of committing "irregularities" during the vote in August. It ordered a re-run within 60 days.

Kenyatta termed the decision a "judicial coup." He said the order lacked adequate scrutiny of the forms used to tally votes and warned it could unleash judicial chaos in the east African country.

Odinga had petitioned the court, claiming the electoral body's computers were hacked to rig the results in Kenyatta's favor, who won by nearly 1.4 million votes.

Acting on the top court's order, the electoral body first scheduled the re-run of the vote on October 17. The date was rejected by Odinga, who alleged his coalition had not been consulted on how and when the new vote would take place.

The electoral commission on September 21 postponed the new vote to October 26 after the French firm supplying the voting technology said it would not be ready in time.

Based on the Supreme Court's decision, Kenyatta cannot run alone on the ballot or be sworn in automatically, said Ndungu Wainaina, executive director of the International Center for Policy and Conflict.

The court ordered a fresh election between the original candidates of the Aug. 8 poll, and if that does not take place the court will annul results of the new vote because it did not abide by the order, he said.

Kenya's electoral commission is struggling to upgrade voter technology in time, while minority candidate Ekuru Aukos says he also wants to be included in the poll. (18.09.2017)