Keeping an endangered Buddhist art form alive | Asia| An in-depth look at news from across the continent | DW | 04.06.2014

Cambodia's Khmer Rouge wiped out almost two million people and many traditional arts as well. But some are keeping the old forms alive, including a woman whose voice has taken her from the rice fields to the opera stage. 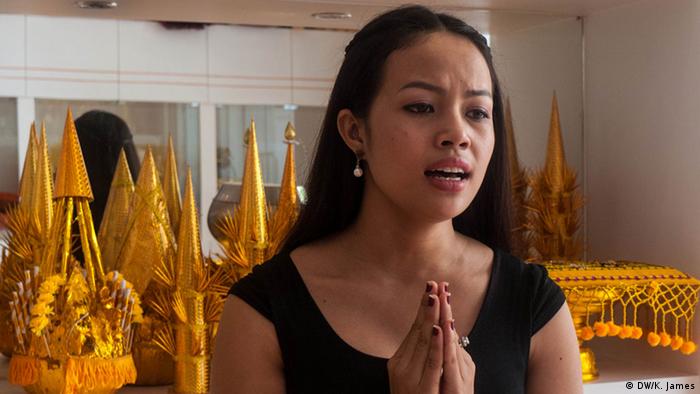 When Phoeun Srey Pov begins to sing, the palms of her hands come together in the traditional Cambodian som pas position. She closes her eyes slightly and seems to go inside herself, or perhaps somewhere else entirely. The room is flooded with a slow, meandering melody-sung poetry-that is as haunting as it is beautiful.

Srey Pov, 24, is one of Cambodia's leading, and youngest, singers of smot, a centuries-old art form that is central to the country's Theravada Buddhism. Smot chants tell of the Buddha's life or teach religious principles. It's a demanding art form, requiring precise technique and whose texts are in the Pali language or use Khmer words not often found in everyday speech.

"Not many people can do it, just some masters and they are old now," Srey Pov says.

"I have only found five or six masters who can chant smot well. For the young like me, [there are] not many. That's why I've become famous," she adds, laughing.

While she insists she's only joking, there's more than a little truth to her claim to celebrity. This young woman who grew up in a poor, provincial family of rice farmers now co-hosts a weekly television show on one of Cambodia's leading channels, performs nearly daily at ceremonies at various pagodas, and has toured extensively abroad, visiting Australia, India, Nepal and Taiwan, She has performed during five trips to the United States, once with the Houston Grand Opera.

Then, five months ago with proceeds from her performances and help from a sponsor in the US, Srey Pov opened up a gleaming store selling products used in Buddhist ceremonies. Through sales and her performance fees, she now supports her two parents and young brother and sister, who have come to live with her in Phnom Penh.

An audition, a new life

But in 2004, when she was 13, Srey Pov was living with her rice-farming family in Kampong Speu, a province west of the capital. While her parents and four siblings always had a roof over their heads and enough to eat, life was hard. Most teenagers left school at 15 or 16 to go to work in the fields or toil in nearby garment factories. Srey Pov didn't think her life would be much different.

But one day she heard about a group planning to visit a nearby school to audition people who could sing. The group, Cambodian Living Arts, was looking for young people who were interested in learning smot, an art form firmly on the endangered species list; its few remaining practitioners were becoming alarmingly old. Cambodia Living Arts regularly scours the country looking for young people interested in traditional performing arts and gives them the opportunity to study with older masters, aiming to repair the nation's cultural heritage that had been crippled during the 1975-79 Khmer Rouge era.

"We often identify those groups and set up a class within the community," said Phloeun Prim, executive director at Cambodian Living Arts. "[Masters] then are able to provide training to the next generation."

Srey Pov decided to take a day off school and go to the neighboring village for the audition. She had always liked to perform at school events, but admits to being nervous about possibly exploring the world of smot, which had filled her with dread as a child.

"Because smot is used at funerals, and we don't understand the meaning, we just hear the sound of it," she says. "We feel so scared. We think: ghosts, souls - and get so afraid!"

Despite her reservations, she impressed the staff from Cambodian Living Arts, who arranged for her to start studying with two local smot masters. She did so well that in 2007, she was awarded a scholarship. She left her family and came to Phnom Penh to learn from one of the country's most renowned smot masters and attend university.

"In my family, I'm the only one who had a chance to continue my education until university," she says. "My life changed because I started smot."

Music of a nation

Today, given her artistic and business success, Srey Pov says she would like to give back to the community, helping keep smot alive by getting other young people interested in it. She says that people her age are mainly interested in pop music inspired by imports from Korea and other Asian countries. But says if more young people don't learn these ancient poems, a valuable part of Cambodian culture could disappear forever. 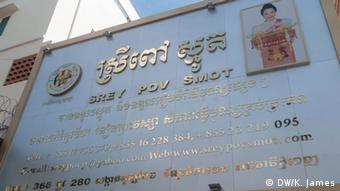 It would be a grievous loss. When smot is chanted at ceremonies, tears often well up in the eyes of Cambodians in attendance, so central is it to the nation, one whose history includes grinding poverty, civil war and genocide. For this overwhelmingly Buddhist country, whose motto is "Nature, Religion, King," smot is in integral part of the national psyche, even for those living outside the country, as Srey Pov found out during her visits to Cambodian communities in the United States.

"When they heard smot songs, they missed Cambodia so much," she said. "Because smot is like the voice of Cambodia."

Like the country's recent history, smot can seem almost unbearably sad. But the form itself no longer makes Srey Pov uneasy. While it's often performed at funerals, and addresses the passage of life from birth to adulthood to, finally, death, she doesn't see as intrinsically mournful.

"When we understand the meaning, it's really not sad at all," she says. "It makes people feel peace of mind and hope."

Cambodian media is dominated by pro-government outlets and it can be difficult to hear critical voices, except online. But a proposed law could undermine that bastion of free expression. (14.05.2014)

An organization in Cambodia seeks to preserve traditional performing arts that were nearly wiped out during the genocidal years of the Khmer Rouge. It is sometimes a race against time. (07.08.2012)