Kazakhstan's voters appear to have backed reforms that remove powers from the president and end privileges enjoyed by former leader Nursultan Nazarbayev. 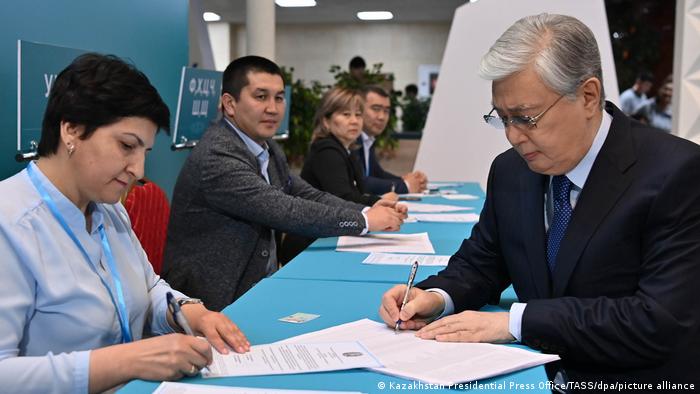 Tokayev registering at a polling station during the constitutional referendum

The reforms for a "New Kazakhstan" has come from President Kassym-Jomart Tokayev — Nazarbayev's hand-picked successor — in the wake of violence earlier this year.

Both the former and current president are allies of neighboring Russia, with Tokayev having called in troops from a Moscow-led security bloc of former Soviet states to suppress January's unrest.

Nurlan Abdirov, chair of the national electoral commission, said 77.17% of voters had backed the move, while 18.66% voted against.

According to Abdirov, there was a turnout of more than 68% in Sunday's referendum — meaning that more than half of the voters had cast their ballots. Rules stipulated that at least half of registered voters had to take part in the plebiscite for it to be considered valid.

"The referendum can be considered validated," Abdirov said.

What was the vote about?

The poll on constitutional changes was seen by many as a chance to close the chapter on the country's former leader.

According to Tokayev, the proposed changes will empower lawmakers and dismantle the "super-presidential" system currently in place. But the reform also ends a slew of privileges enjoyed by Nazarbayev.

Tokayev said the vote was aimed at "laying the foundation for the Second Republic."

Nazarbayev stands to lose his title as "Elbasy" or "Father of the Nation." The 81-year-old, who ruled the ex-Soviet state for almost three decades, retained this title — helping to cement his ongoing political influence — even after stepping down in 2019.

Another amendment nixes Nazarbayev's right to run for president more than two times.

The reforms will also ban the president's relatives from holding government positions — another controversial issue in the oil-rich country.

They also significantly strengthen the role of the country's parliament, restore the Constitutional Court, and abolish the death penalty.

The vote came with Kazakhstan still reeling from violent unrest in January, which left over 220 people dead.

People had taken to the streets to protest a sharp rise in fuel prices, but the marches quickly grew into a wide-front protest movement against government policies and the legacy of Nazarbayev.

How the violent unrest in Kazakhstan unraveled

President Tokayev responded by clamping down on the unrest and inviting peacekeepers from Russia and several other ex-Soviet states into Kazakhstan to help him restore order. He decried the protesters as "bandits" and "terrorists." Security forces were given shoot-to-kill orders. At the same time, however, Tokayev moved against Nazarbayev and his allies — a surprising turn from a politician widely seen as ruling from his predecessor's shadow.

The 69-year-old removed Nazarbayev from his position as the head of the powerful Security Council. He also arrested former intelligence chief Karim Masimov on charges of treason. Nazarbayev's nephew Kairat Satybaldy is currently facing embezzlement charges.

Nazarbayev has kept out of the public eye since the January crisis but has expressed support for Tokayev and the constitutional changes. The former president has also said his family members should face consequences if they broke the law, but he went on to note they had a right to a fair trial.