The Pole made another step towards back-to-back Four Hills title as he secured his second win of the 2017 tour after finishing with 283.4 points, ahead of Germany’s Richard Freitag. Next up: Innsbruck. 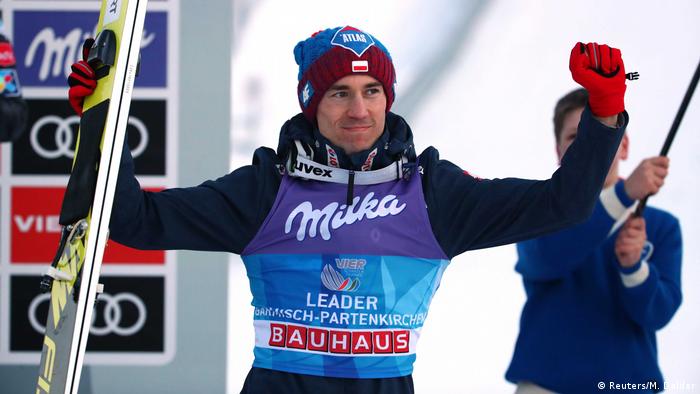 Poland's Kamil Stoch made it two wins in two at the Four Hills ski jumping competition on Monday, leaping 135.5 meters and 139.5 meters for a total of 283.4 points.

Germany's Richard Freitag, the overall World Cup table leader this year, ultimately had to settle for second. His second-round jump of 137.0 meters had temporarily put him in the lead, until Stoch delivered his longest leap. Karl Geiger was also in the mix, especially after a strong first-round jump of 133.7 meters, but finished seventh with 268.2 points. Norway's Anders Fannemel rounded out the podium in third.

"It was a challenge for me to stay concentrated. Maybe it was my experience that helped," Stoch told Eurosport after the win.

Despite losing to Stoch for the second Four Hills leg in a row, Richard Freitag remained positive. "Basically everything is still open," he said.

Stefan Kraft, the 2015 Four Hills winner, lost any chance of winning the competition again after only managing 122.5 meters in his first go. "It's a bitter day for me,” the Austrian told German broadcaster ZDF.

Roughly 21,000 spectators attended the event in Bavaria's Garmisch-Partenkirchen, the second and final leg to take place in Germany. The competition will now moves on to its first Austrian venue, Innsbruck, where qualification will start on Wednesday.