Jordan - the next Middle East flashpoint? | World| Breaking news and perspectives from around the globe | DW | 12.12.2012

Jordan - the next Middle East flashpoint?

For the West, the Jordanian monarchy is an anchor of stability in the Middle East. But one analyst argues that ignoring the discontent there to maintain the status quo could deepen tensions in the country. 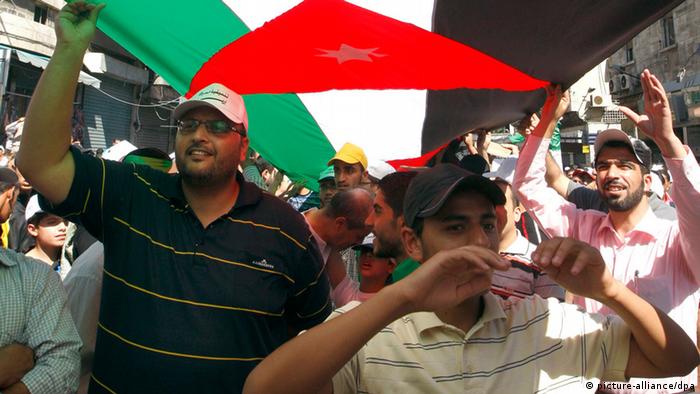 As rebellion continues to sweep one Arab nation after another, Jordan's diplomatic importance seems to grow. Quite apart from its relative domestic stability, the Hashemite Kingdom is currently the only Arab country with a resident ambassador in Israel, a vital point of contact given Jordan's large Palestinian population.

Jordan is also unique for another reason - its leadership, under King Abdullah II, remains peculiarly confident. Despite thousands of nationwide demonstrations over the past two years, political uncertainty brought on by a succession of no fewer than five prime ministers in two years, and a brutal conflagration on its Syrian border that is filling up its refugee camps (there are 200,000 Syrian refugees in Jordan, by the government's last count), the monarchy seems convinced that it has overcome the worst of the Arab Spring and is back on the front foot.

The story in Amman was very different a year ago, when the king openly spoke of instability in the country and frantically promised democratic reforms in the hope of heading off a potential rebellion. Earlier this month, Abdullah felt assured enough to consider postponing the upcoming parliamentary elections set for January 23, a move that duly stirred an opposition outcry. 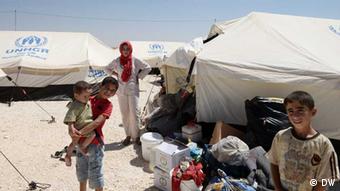 Hasan Momani, director of the Regional Center on Conflict Prevention at the Jordan Institute of Diplomacy - a research institute established by the Jordanian foreign ministry - described the mood in the country as generally calm. But he acknowledged that the situation in Syria and the precarious economic situation were a threat.

"We are in a critical situation, but there is danger and risk everywhere - I don't think Jordan is descending toward instability," he told DW. "If you are talking about our geo-political position, we are squeezed - we are in the eye of the storm. Yet there is very little violence in Jordan. I'm not ruling out that violence did occur on certain occasions, but violence can also take place in the most democratic states."

Abdullah's relative security is partly down to the continued support of Israel, Saudi Arabia, the US, and the European Union. Apparently for the sake of regional stability, those international powers are showing more willingness to overlook the slow pace of constitutional reforms, which were meant to invest the Jordanian parliament with more power. (Despite promises made nearly two years ago, the king still has the power to arbitrarily appoint and dismiss governments and is only obliged to consult parliament over the appointment of a prime minister at his discretion.)

This foreign support often comes in the shape of financial aid to prop up Jordan's struggling economy. In August, the country took out a loan of $2.05 billion (1.58 billion euros) from the International Monetary Fund - though that was contingent on commodity price increases and public subsidy cuts that will almost certainly rile the population further. Saudi Arabia, meanwhile, provided some $1.4 billion in aid in 2011 alone.

But there is a price to pay, argues Julien Barnes-Dacey, senior policy fellow at the European Council on Foreign Relations (ECFR). He believes the international community's pragmatic myopia is exacerbating instability in the long run. "There are political and economic tensions that if they are not resolved will potentially create a measure of discord," he told DW. "So long as you provide enough funds to maintain the status quo, the Jordanian authorities don't feel the need to address the fundamental problems that are coming their way." 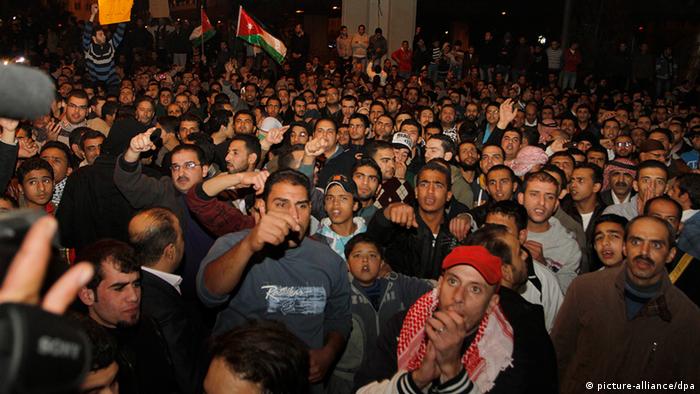 Jordanians have been protesting against price increases

"For two years now, the European countries have been willing to give the king the benefit of the doubt in terms of his promises of change, and yet we see very little on the ground," he added, though he underlined that this is not to say that Jordan will suddenly descend into calamity and bloodshed. "I don't think that will happen, but the question is this: Is there a danger that Europeans will continue to buy the idea of reform? The desire for stability and the desire to take the king at his word is trumping the EU's other stated objectives to engage with democratic forces."

But Momani said much had been achieved in the past two years - such as the establishment of an independent commission on elections and a supreme constitutional court. He also said there was a reason for the slow pace. "King Abdullah made it clear that reforms have to be gradual - we need to build consensus, we need to build institutions to make reforms successful," he said. "We don't want to end up with a chaotic situation. You need to have a safe transition where everyone will participate."

Not as stable as it seems

An obvious palliative influence in Jordan is the fact that the regime's human rights record is much cleaner than, say, Syria's. The government has largely made no attempt to suppress demonstrations, which has helped to keep the deep divides in the country from international attention.

"The protests have not gained the critical mass where they have seized the imagination of the foreign media, but certainly it's been unprecedented in scope," said Barnes-Dacey. "Over the last few months we've seen very large demonstrations calling for serious reform. This is not something that can be relegated as meaningless - this is fairly widespread and deep discontent."

Nor is the anger in the country simply part of the wave of regional discontent, the so-called Arabellion - though clearly that has fed into it. The protesters' concerns are wholly domestic, and yet the issues would be recognizable to protesters around the world - corruption, unemployment, austerity measures, political disenfranchisement. 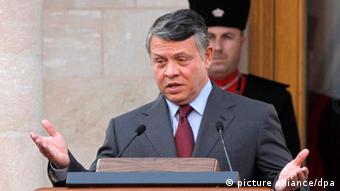 Fear of the Muslim Brotherhood

The fear that binds western powers and Arab monarchies alike is that democratization in the Middle East will open the door for the Muslim Brotherhood to seize power. But, as Barnes-Dacey points out, resisting such forces carries its own dangers. "One has to engage with the political realities as they stand on the ground," he said. "In Jordan it's clear that the Brotherhood's political arm, the Islamic Action Front, is a well-organized political machine that has strong support across the country. So it's not feasible to push them aside when they do represent a wide spectrum of public opinion."

Then again, the Jordanian opposition is more than simply an Islamist movement. "There's a much wider sense of discontent which draws in a much larger part of the population," he said. "The danger is that the authorities in Jordan and even some of their backers in the West make this purely about the Muslim Brotherhood, which is not really fair."

As yet, Jordan is a long way from the verge of collapse - the monarchy continues to enjoy popularity and protesters on the streets are calling for reform rather than revolution. "The king still has a lot of room for maneuver," said Barnes-Dacey. "The danger is that the country will continue down the same path whereby you don't have a more inclusive system being created, and potentially that leads to more discontent and polarization. That means that perhaps in a year you have a much more uncertain environment."

Thousands of young women travel to countries like the United Arab Emirates hoping to earn a better living. But many end up exploited, abused, threatened and isolated by their employers, with nowhere to go for help. (02.12.2012)