Jordan says it is still willing to hand over a jailed Iraqi militant to "IS" in return for the release of a Jordanian pilot being held captive. The renewed offer comes after the terror group beheaded a Japanese hostage. 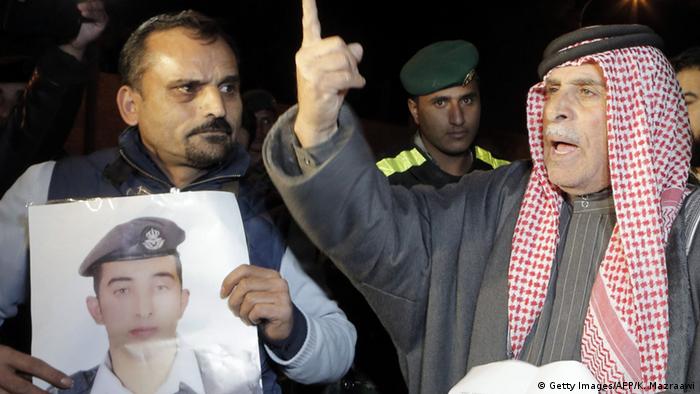 Jordan's government said Sunday that its security and military agencies were working around the clock to ascertain whether the captured pilot, Lt. Muath al-Kaseasbeh, was still alive.

Government spokesman Mohammad al-Momani said Jordan would "do everything it can" to secure his release. "We are still ready to hand over the convict Sajida al-Rishawi in return for the return of our son and our hero," he said.

In a statement from the royal court, King Abdullah II said "all efforts in Jordan are being exploited to seek the release of the hero pilot."

Al-Kaseasbeh was captured in December when his F-16 fighter jet crashed in territory controlled by "Islamic State" (IS) in Syria. The group, an offshoot of al Qaeda which has seized territory in Syria and Iraq, has demanded al-Rishawi's release in exchange for the pilot's life. Amman has agreed to comply, but not before receiving proof al-Kaseasbeh is still alive.

Al-Rishawi is in jail in Jordan, facing death by hanging for her role in a 2005 suicide bomb attack which left more than 60 people dead in Amman. 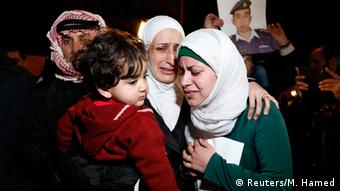 Jordanian authorities have come under significant public pressure to negotiate with the militants and get al-Kaseasbeh home safely. He reportedly belongs to an important Jordanian tribe that provides significant support to the Hashemite monarchy. Protests have erupted in Karak, the pilot's home town, calling for the government to take action.

"Muath is our son and a son of the military, and the government is responsible for him," he said.

Jordan's government has also condemned the purported "IS" beheading of Japanese journalist Kenji Goto, which appeared in a video posted online late Saturday.

The footage made no mention of al-Kaseasbeh, raising fears about the Jordanian, who was held captive with Goto.

Goto was the second Japanese hostage to be executed by the jihadists. Last week, IS claimed responsibility for beheading Haruna Yukawa.

IS said it wanted to punish the Japanese government for pledging to contribute $200 million (175 million euros) in aid to countries affected by the terror group's seizure of parts of Iraq and Syria last year. Since August, IS has executed two US journalists, an American aid worker and two British aid workers.

Japan PM vows justice after IS beheading of Goto

The purported beheading of high-profile Japanese journalist Kenji Goto has prompted a sharp response from the Japanese government. Prime Minister Abe has vowed to help bring the "Islamic State" killers to justice. (01.02.2015)

The "Islamic State" (IS) has released a video purportedly showing the execution of Japanese hostage Kenji Goto, according to the SITE monitoring group. The Japanese government says it is trying to authenticate the video. (31.01.2015)