Jordan's government almost collapsed in the summer after it tried to pass a deeply unpopular tax bill. It has been facing fresh protests since it passed a similar law in mid-November. 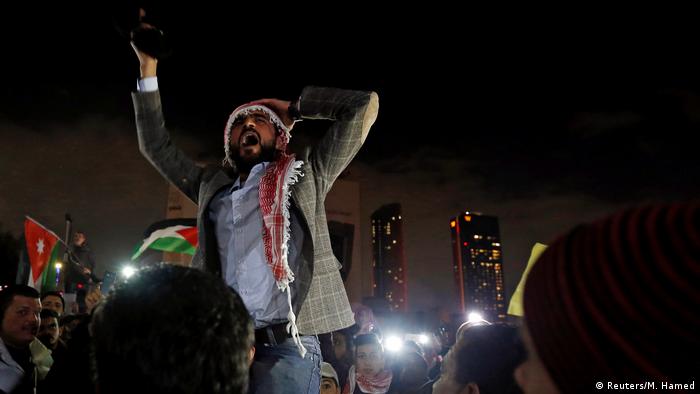 Hundreds of Jordanians gathered in front of the Prime Minister Omar Razzaz's office in the capital Amman to protest a tax law backed by the International Monetary Fund (IMF).

The government scrapped a very similar bill in the summer after massive protests against the measure forced the resignation of former Prime Minister Hani Mulki.

The new law, which was passed in November, included a tax hike for employees of at least five percent and on companies of between 20 and 40 percent. The tax threshold for households was also raised to 20,000 Jordanian dinars ($28,000, €24,650) and exemptions for education and health expenses were introduced.

Demonstrators also called for democratic reforms and accused Razza of failing to fight corruption and improve public services. Many called for the release of at least 24 people who had taken part in protests in the past two weeks, according to local media.

The government said it would maintain law and order while remaining open to a dialogue with the protesters. "We must safeguard Jordan's stability and security," government spokeswoman Jumana Ghunaimat said.

In a bid to placate the protesters, King Abdullah called on the parliament to pardon several thousand people imprisoned for convictions ranging from petty to more serious crimes.

Jordan sought IMF help over difficulties in servicing its $40 billion pile of public debt and high unemployment. Unlike its neighbors, it has few natural resources and relies heavily on foreign aid.