Ryoko Azuma has become the first female squadron commander in the Japanese Maritime Self-Defense Force (MSDF). Her unit includes the flagship Izumo, the largest warship in the Japanese navy. 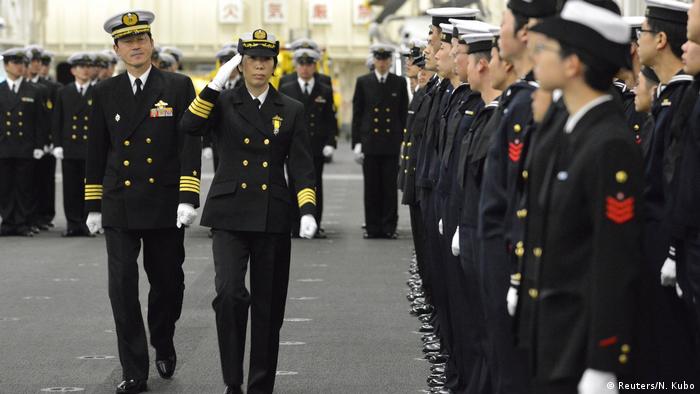 About 400 sailors were in attendance for the ceremony at Yokohama near Tokyo on Tuesday to mark Azuma's arrival in the post. She becomes the first woman to command a warship squadron in Japan.

Azuma will command four ships and a combined crew of 1,000 which make up the First Escort Service in Japan's Maritime Self-Defense Force (MSDF), the naval branch of Japan's Self-Defense Forces (SDF). The MSDF is tasked with the naval defense of Japan. Only 30 of the squadron's crew are women.

"I don't think about being a woman," Azuma told reporters on Tuesday. "I will concentrate my energy on fulfilling my duties as commander."

In addition to Azuma, other female MSDF officers include four captains and a rear admiral in charge of logistics.

"I want to devote myself to becoming a person who will inspire others," Azuma said when asked if she wanted to serve as a role model.

"This is the first time a woman was appointed for the job," a spokesperson for the MSDF said. "But she wasn't chosen because she was a woman."

The MSDF has 154 ships and 346 aircraft with 45,800 personnel. Its main tasks are to maintain control of the nation's sea lanes and to patrol territorial waters. It also participates in UN-led peacekeeping operations and Maritime Interdiction Operations to delay or destroy enemy forces before they do any harm to friendly forces.

A decade of women on warships

The 44-year-old Azuma joined the MSDF in 1996, when women were not allowed to serve on warships. That rule was changed 10 years ago.

Some 14,000 women currently serve in Japan's SDF, about six percent of the total personnel.

By 2030, the SDF aims to increase that percentage to nine percent.

Japan's economy, which lags behind other developed countries in terms of gender equality, has turned to women as the working-age population shrinks amid a drop in birthrates.

The government has forecast that the number of people aged between 18 and 26 will shink from 11 million last year to seven million by 2065.

No Easy Situation - Women in the German military