Japanese PM Abe on course to win the general election | Asia| An in-depth look at news from across the continent | DW | 12.12.2014

Japanese PM Abe on course to win the general election 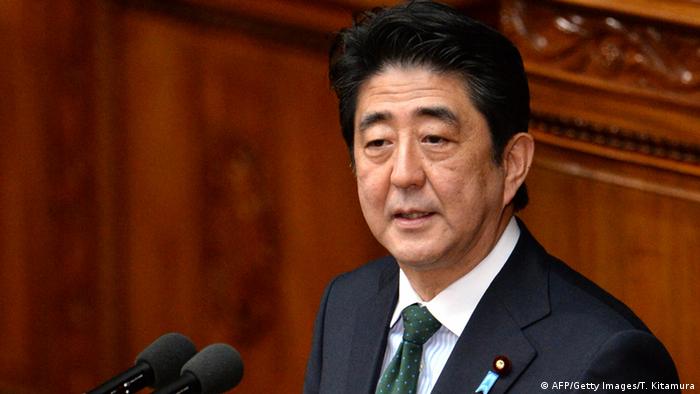 Abe, the prime minister and head of Japan's LDP, is set to secure a resounding general election victory on Sunday, December 14, in a poll that he has forged into a vote of confidence on his "Abenomics" economic reforms. But that win might ring decidedly hollow if the turnout is as low as analysts are predicting.

A good percentage of the Japanese public will not bother to vote because the sense is that the result is already a foregone conclusion. And that is because the opposition parties are so divided and devoid of meaningful policy ideas that few believe they could rule effectively.

Critics of the government add that Abe is going to be rewarded with a new four-year mandate simply because he is "the least bad option." 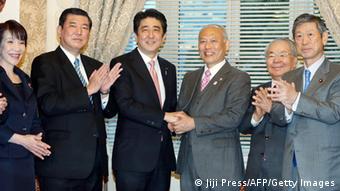 Is LDP 'the least bad option'?

Polls conducted in the run-up to the election suggest that 34.1 percent of the public support the LDP, with the main opposition party, the Democratic Party of Japan (DPJ), a long way back with 11.7 percent.

Support rates for the remaining eight parties that are putting forward candidates are in the single figures.

That will mean that LDP is likely to take close to 300 of the 475 seats being contested in the Lower House of the Diet, up from the 294 seats it took in the last election, in December 2012.

"The weakness of the opposition is proving a big help to Abe," Jun Okumura, a visiting scholar at the Meiji Institute for Global Affairs, told DW.

Japan's prime minister has told his party that he plans to call snap elections next month. At the same time, he said he would put off implementing a second sales tax increase. (18.11.2014)

"Support for Abe has been gradually slipping in recent months, primarily as a result of the bad economic news that we have been having - GDP declining, the public refusing to spend, and the increase in the consumption tax in April having a more serious impact on the economy than anticipated - but the opposition has simply not been able to take advantage of that," he said.

The DPJ has also found it difficult to be too critical of Abe's decision to raise the consumption tax to eight percent from five percent because that was a decision taken by the party when it was in power before the previous election.

Opposition parties have also been unable to shift the debate away from economics to other issues that are of concern to Japanese voters, from questions over the resumption of nuclear power to reinterpretations of the constitution on defense issues, welfare cuts, rising medical care costs, education and the erosion of workers' rights with the end of the "job for life" maxim at companies here.

But it is Abenomics that dominates the debate, with Abe from the outset making it clear that he perceives the election as a vote either for or against his reforms.

Abenomics initially started out positively, with the first two arrows, of fiscal stimulus and monetary easing, seemingly striking their targets. But it is the final arrow, structural reforms to reinvigorate the economy that has fallen short.

Statistics released in mid-November showed that Japan's GDP for the July-September contracted 1.6 per cent on an annualized basis, the second consecutive quarter that the world's third-largest economy has shrunk.

Faced with those figures, Abe postponed the scheduled second phase of the hike, to 10 percent, from October of next year until early 2017, and called the election.

"People know that Abenomics is not working, that it has failed, but he is still going to be re-elected and I am certain that he will continue to push these reforms as the answer to Japan's economic problems," Makoto Watanabe, a lecturer in communications and media at Hokkaido Bunkyo University, told DW. 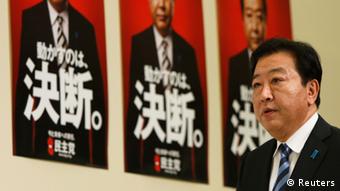 "These reforms have done nothing to assist the ordinary people; all they have done is benefitted large companies and people who were already wealthy," he said. "Since Abe came to power, the gap between the rich and poor in Japanese society has grown wider, while only two percent of Japan's big businesses take in about half of the total profits."

The concern is that armed with an overwhelming majority in both houses of the Diet, Abe might consider that victory at the ballot box gives him carte blanche to push through any number of contentious decisions, including revising the constitution to enable Japanese troops to be deployed overseas, severer punishments for criminals, a further reduction in workers' rights, ramming through the restart of the nation's nuclear reactors, additional spending on unnecessary infrastructure projects that please the powerful and politically savvy construction companies.

"Armed with that sort of power in the Diet, Abe could decide that he can do whatever he wants because the people support him," Watanabe said. "And that worries me."