Bundesliga duo Shinji Kagawa and Yuya Osako both got themselves on the scoresheet as Japan triumphed over ten-man Colombia. They become the first Asian team to ever beat a South American side at the World Cup. 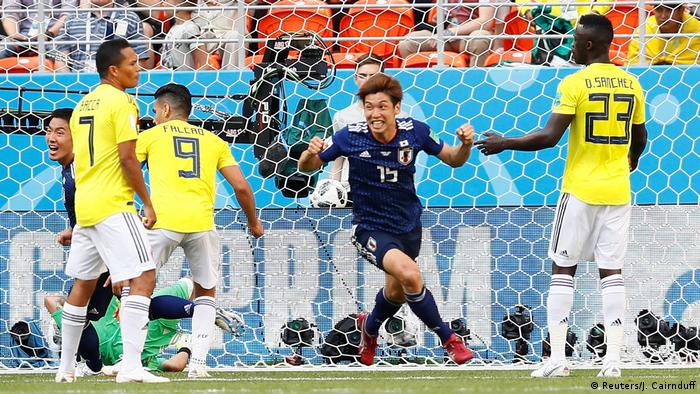 Japan became the first Asian team to ever beat a South American side at the World Cup as they picked up a narrow 2-1 win over Group H favorites Colombia, inspired by a Bundesliga double act.

Colombia got off to the worst possible start when midfielder Carlos Sanchez was sent off in the third minute for deliberate handball - the second fastest red card in World Cup history.

Shinji Kagawa scored the resulting penalty, but Japan were unable to press their man advantage against an ambitious Colombia side who equalized through Juan Quintero, who squeezed over the line shortly before halftime.

After the break,Colombia seemed intent on not conceding, but did introduce superstar James Rodriguez off the bench after the Bayern midfielder was left out of the starting line-up due to muscle pain.

The 2014 Golden Boot winner failed to provide the match-winning heroics though, as Yuya Osako grabbed the decisive goal with a glancing header in the 73rd minute to secure victory for the Blue Samurai.

FULL TIME! It's all over. Japan hold on to claim victory in their opening game of the World Cup 2018 thanks to a Bundesliga double!

90+4' - Japan get a scare with a short backpass. Fortuntely Kawashima was quickly off his line.

89' - Do Colombia have it in them. A hopeful ball forward is knocked down by Falcao. The offside flag was up though.

87 ' - Tired legs have definitely caught up with Colombia, who have been a man down since the third minute.

84' - Japan are looking very solid defending their lead. Colombia need to produce a moment of magic to avoid defeat in their World Cup opener.

78' - CHANCE! A cheeky backheel catches out Japan's backline. James Rodriguez is clean through on goal, but smashes his effort well over after fantastic defensive work from Osako!. Wasteful.

77' - From one former Cologne player to another (Yuya Osako has agreed to join Werder Bremen)...

74' - GOAL! Yuya Osako heads Japan in front. The resulting corner is teased into the area and Osako, squeezing two or three Colombian defenders manages to meet the cross and plant a header in off the far post.

73' - SO CLOSE! Japan really want the win as Yuya Osako tees up Hiroki Sakai to have a go at goal. Deflected behind for a corner.

71' - First sight of goal for Honda as Colombia opt not to close him down. Fortunately, his shot is scuffed along the ground from 20 yards and easy to deal with.

69' - He opened the scoring from the spot and now makes way for Keisuke Honda. You have to say it was a solid, not spectacular outing for the Dortmund man. Needed to pull a few more strings in the final third for my liking.

67' - The answer to the last question is: unlikely. Right now it's most one-way traffic in Japan's favor as Inui sees another half-chance blocked.

64' - It's worth noting that James came off the bench to score in Colombia's 4-1 win over Japan in the 2014 World Cup. Will history repeat itself?

62' - Hiroki Sakai's run in behind is found by Kagawa. The Marseille right-back has no one to aim for in the box, goes for goal himself and sends the ball out for a throw in.

57' - CHANCE! Japan have really ramped up their efforts since the restart. Takashi Inui tries to bend one towards the far corner, but it's seen all the way by Ospina.

54' - CHANCE! Yuya Osako works the channels to get by Davinson Sanchez. His resulting shot from a tight angle does little to trouble Ospina in goal though. Too easy from Colombia, not good enough from Japan.

52' - Referee Damir Skomina was letting a lot of minor fouls go in a physical first half, but is pulling players up a lot more often after the break. It will be difficult for players to know where the line is now before they cross it.

47' - Colombia haven't panicked since going down to 10 men, which is impressive. They've come out in the second half wanting to control the game, which isn't always the case for a side down to ten men.

SECOND HALF! We're back underway in Saransk. Can Japan make their extra man count or will Colombia complete a stunning comeback? Both sides are unchanged.

HALF TIME! All square at the break following one of the most dramatic first halves we've seen this summer.

A penalty, red card and goal all inside the opening six minutes saw Japan take an early lead through Shinji Kagawa's spot kick, while Carlos Sanchez was given his marching orders for Colombia.

Juan Quintero's cheeky free-kick levelled the scores and, right now, you feel anything is possible.

44' - Japan may have a man advantage, but they look the more nervous of the two sides and are making more mistakes. The Blue Samurai's passed up chances to put this game beyond Colombia, who are now in the ascendancy.

41' - There were plenty of protests from the Japanese players. Replays show that the ball clearly crossed the line. Though they may be trying to challenge the free-kick being given. Either way the referee is unmoved.

39' - GOAL! Free-kick for Colombia. Juan Quintero steps up and sends it UNDER the wall and into the bottom corner. Kawashima scrambles across his line, but not in time to keep the effort out. Cheeky!

34' - A clipped ball over the top finds Falcao, but just like his chance from earlier, he's on the stretch and can't get enough power on the ball to truly trouble Kawashima.

33' - Colombia have not created any real chances as of yet, but their pace was a real threat. With Cuadrado going off, that won't neccessarily be the case anymore. Seems a very strange decision.

31'- The biggest compliment I can give Colombia is that them being down to ten men isn't noticeable. They're demonstrating the right amount of ambition, but haven't found a way the break Japan down yet. Jose Pekerman is making a change though as Barrios comes on to replace Juan Cuadrado. What?

28' - There's a clash between Haraguchi and Mojina. Both players receive treatment and are able to continue.

25' - Cuadrado earns his side a corner. The intial cross comes to nothing, but Japan fail to clear their lines allowing Cuadrado to get a shot off from the edge of the area. It's blocked.

22' - Just think, you've travelled halfway round the world and inside three minutes your team are a goal and a man down.

The Colombia fans to their credit are still making quite a racket and, based on how proceedings are being played out, you can't rule it out that they'll turn this around. Juan Cuadrado is looking very lively.

19' - Sanchez was shown a straight red and could miss the remainder of the tournament dependant how Colombia fare. A turning point. 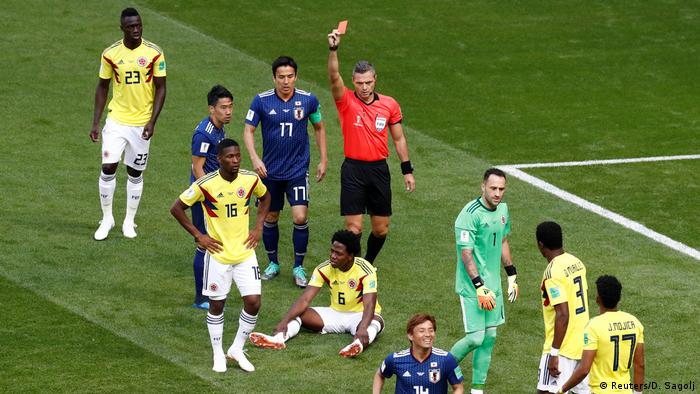 16' - CHANCE! Takashi Inui is played into space on the left side of the box only to curl his first-time effort well wide of the target.

14' - The last couple of minutes have seen more Colombians rolling on the ground after a challenge than football. Japan are getting physical and keeping tight, but there are a lot of theatrics on show right now.

12' - CHANCE! A free-kick is floated into the Japan area, Falcao gets a touch on the stretch, but can't guide it past Kawashima. It's not often he lets chances like that go unpunished..

9' - A man down following Sanchez's sending off, Colombia are trying to find their feet in the game. Japan are having more of the ball as a result.

6' - GOAL! Shinji Kagawa converts from the spot. Cool as you like, the Dortmund man waits for Ospina commit before rolling the ball the other way. Dream start for Japan! 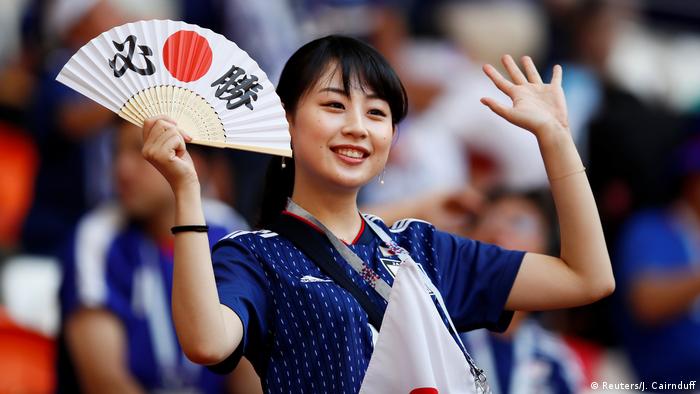 4' - PENALTY + RED CARD! Yuya Osako breaks in behind only to fail to beat Ospina in a one-on-one situation. Shinji Kagawa fires at goal on the follow up and his effort is blocked by the arm of Carlos Sanchez. Sanchez is sent off as the referee points to the spot. VAR not needed because it was as clear as day.

3' - Japan have barely touched the ball so far, with Colombia looking very comfortable in possession.

KICK OFF! - We're underway in Saransk. Four Bundesliga representatives on show for Japan with Makoto Hasebe, Shinji Kagawa, Genki Haraguchi and Yuya Osako all worth keeping an eye on for various reasons.

Germany may have lost to Mexico, but it won't stop Ilkay Gündogan from cheering on his former teammate.

Out man in Russia, Jonathan Crane has been incredibly impressed with the Latin American flair on display amongst the travelling fans. Click on the link in the Tweet to get his view...

The Colombian has been unable to overcome a minor calf injury, but is in the matchday squad.

Welcome back to DW's coverage of the World Cup 2018 in Russia, where today we'll see the final four teams get their group stage underway. Group H participants Colombia, Japan, Senegal and Poland have been waiting patiently in the wings, but now is their time to shine before hosts Russia take on Egypt in today's final game.

We've got matchday fever once again and, let's be honest, when it comes to the World Cup we're all Oscar Murillo. Silky moves!