Several recent deaths have highlighted the weight-associated risks in the traditional Japanese sport. Experts are calling for improved oversight and more attention to personal health on the part of wrestlers. 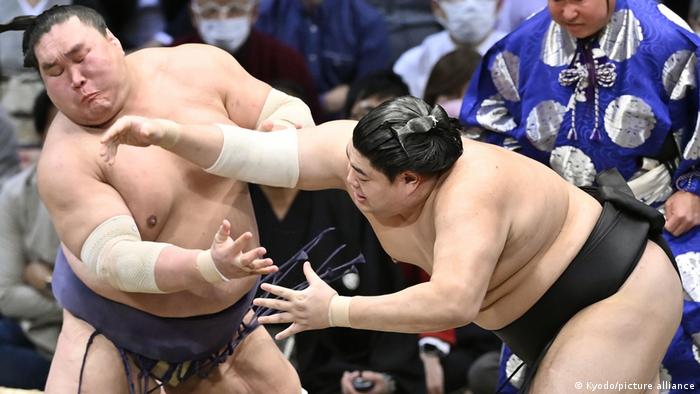 The early deaths of three sumo wrestlers over the span of just a year and a half have raised the alarm over health and safety for sumo wrestlers.

In May of last year, 28-year-old wrestler Kyotaka Omori, who was known by the sumo name "Shobushi," died in May 2020 after contracting the coronavirus in April of that year.

Omori, who competed in the lower divisions of the sport, was only admitted to hospital the following month after he started to cough up blood. His condition was complicated by diabetes, and he later died of multiple organ failure.

Following Omori's death, Anatoly Mikhakhanov, a Russian-born wrestler, who fought under the name Orora and was the heaviest wrestler in the history of Japan's national sport, warned last year that wrestlers were risking their health in search of victory on the sport's sacred dohyo, or raised ring.

Mikhakhanov had tipped the scales at 292.6 kilograms (645 pounds) at his heaviest.

In an interview with The Asahi Shimbun newspaper, Mikhakhanov said: "It's never easy to stay healthy as long as you are living the life of a sumo wrestler."

"But you are the only person who can take care of you," he said. "Nobody in your sumo stable cares about you."

The suggestion that wrestlers are being encouraged to bulk up even more than usual to be successful is supported by statistics which show that the average weight of a wrestler today is around 160 kilograms, an increase of 15 kilograms from 30 years ago.

Similarly, today's wrestlers today have an average body mass index (BMI) of more than 47, even though someone with a BMI of 25 is considered overweight.

"It is true that you cannot do training unless you eat, but there is no sense in ending up ill," Mikhakhanov said, adding that he had been deeply saddened by his colleague's death. He also called on other wrestlers to "place their own health ahead of everything else."

While he once reveled in being known as the heaviest wrestler in the history of the sport, 1.90-meter (6 foot 2 inches) tall Mikhakhanov has now returned to his hometown of Zaigrayevo, in Siberia, and is using social media to document his efforts to shed the weight that he gained while wrestling in Japan.

His calls for wrestlers to take care of their health appear to have been in vain, however, with two more deaths since Omori's.

In August last year, a retired wrestler known as Maeta, collapsed and died after suffering a heart attack as he was teaching sumo moves to a group of school children.

Most recently, on November 20, another former heavyweight of the ring died young.

Toyonoumi, who weighed more than 200 kilograms and fought in 30 tournaments in the sport's top makuuchi division, died from an unspecified illness at the age of 56.

The heavyweight had reached the rank of "maegashira" before retiring in the spring of 1999, did not miss a single match over a 19-year career, and participated in 1,316 fights.

After retiring, he served as a coach at a stable but left the Japan Sumo Association (JSA) in 2002.

A spokesman for the JSA declined to comment on the nature of Toyonoumi's illness, but he did confirm that he had been suffering from several medical issues before his death.

John Gunning, who reports on sumo wrestling for The Japan Times newspaper, said the death of Shobushi last year triggered a realization within the JSA that it needs to introduce measures to protect wrestlers' health, although the implementation of any revelations will be left up to individual stable masters.

The best hope, he told DW, is for young wrestlers to understand that responsibility for their well-being lies with themselves. And the same goes for Mikhakhanov, he said.

"In his case, I think it's a little much to put the blame on other people when it was really down to their own lack of effort in the sport," said Gunning. "

The only person who can control how much they eat, their size or their weight is the individual wrestler. They have to take personal responsibility, and that includes Mikhakhanov."

"There are all body types in sumo, but he was not known for being an enthusiastic trainer and he was simply extremely overweight," he added.

"He was in the lower divisions and did very little of note in nearly two decades in the sport, so he can't really blame other people for his own situation. It's no one else's responsibility but his own."