Rescue workers in central Japan have been digging through debris in a seaside resort town following a landslide, seeking dozens of missing people. At least four were killed in the disaster. Further rainfall has hampered rescue efforts in Atami, which was hit by a landslide on Saturday

Rescue workers on Monday continued to dig through mud and wreckage in the Japanese holiday town of Atami looking for people buried under debris two days after the resort was hit by a landslide.

Four people have been confirmed dead, but officials are struggling to locate dozens of others possibly buried amid the 130 homes and other buildings destroyed in the disaster.

Officials are, however, hoping that some unaccounted-for residents may have been away when the landslide hit, as many of the apartments and houses in Atami, some 100 kilometers (60 miles) southwest of Tokyo, are second homes or rental holiday accommodation.

Twenty-five people have been rescued, officials said, three of whom were injured.

Hundreds of troops, firefighters and others have been participating in the rescue operation, backed up by three coast guard ships and six military drones. They were to resume work early on Tuesday after suspending their efforts at nightfall. 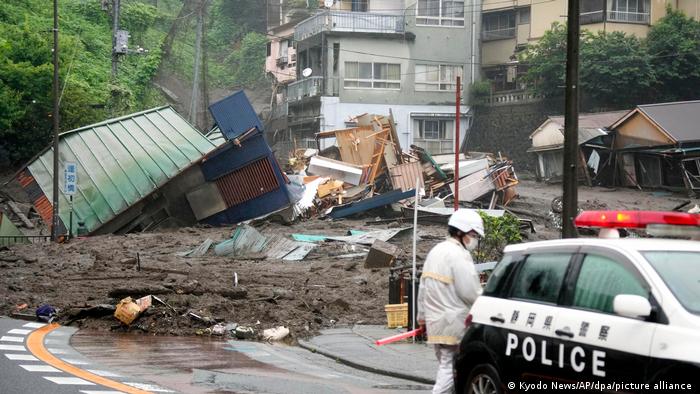 The landslide came toward the end of Japan's rainy season

The landslide occurred in the middle of the morning on Saturday and followed days of heavy rain described as exceptional by survivors. Scientists say Japan's rainy season is becoming more intense as the atmosphere warms through climate change, making it capable of holding more water.

Authorities are reportedly investigating whether large amounts of soil left on the mountain above Atami by a real estate company in 2007 possibly played a role in the catastrophe.

The disaster comes as authorities prepare for the Tokyo Olympics, which are due to start in less than three weeks, despite climbing coronavirus cases in the capital.

The weather agency has forecast heavy rain in other parts of the country, and authorities have been urging people living near hillsides in risk areas to exercise caution.