In his speech to the US Congress Japanese PM Shinzo Abe remained true to himself: He failed to issue his own apology for his country's role in World War II and the enslavement of Asian women, thus angering South Koreans. 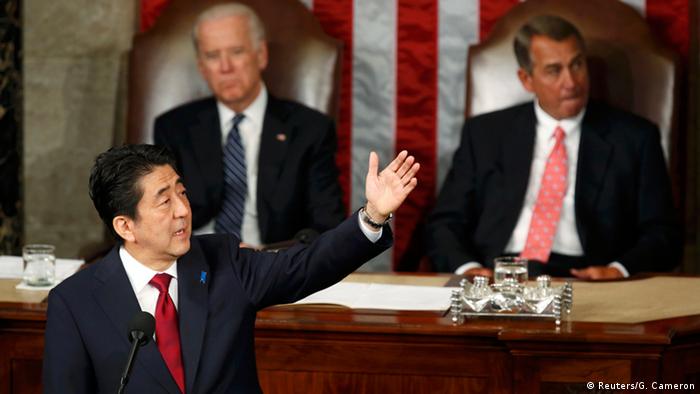 The fact that the first speech by a Japanese Prime Minister to the US Congress was given on the birthday of former Emperor Hirohito was a diplomatic balancing act. The United States expected Abe to affirm his commitment to democracy and free trade and take an appropriate look back at World War II.

However, Japan's neighbors, China and South Korea, were expecting an apology for what they view as Japan's war of aggression. In the end, it seems the Japanese politician only fulfilled the American expectations.

"With deep repentance in my heart, I stood there in silent prayers," PM Abe told both chambers of Congress on Wednesday, April 29, referring to his visit to Washington's World War II memorial. 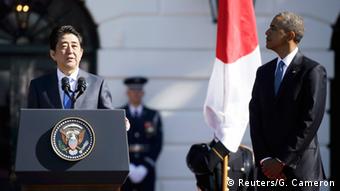 Abe (L) declared his support for the so-called 'Kono statement'

"I offer with profound respect my eternal condolences to the souls of all American people that were lost during World War II," said the Japanese leader. US Vice President Joe Biden reacted positively to these remarks, saying he thought Abe "made it very clear that there was responsibility on Japan's part."

However, the PM's remarks aimed at Japan's wartime adversaries were less conclusive. Post war, he said, "we started out on our path bearing in mind feelings of deep remorse over the war. Our actions brought suffering to the peoples in Asian countries, we must not avert our eyes from that." In this context he vowed to "uphold" the apologies for wartime abuses made by his predecessors.

Some 20 years ago, former Japanese PM had apologized for Japan's aggression during the WWII. And Junichiro Koizumi upheld this apology in 2005. Abe thus remained within this framework in his recent speech.

On the one hand, he failed to use the word "aggression" and refrained from issuing an apology for the occupation of neighboring Asian countries. On the other hand, he upheld the views of his predecessors who used such words.

The PM thus fulfilled the expectations of those in Washington who see Japan as the US' most important ally in terms of counterbalancing China's hegemonic ambitions in Asia.

As Tokyo re-examines its apology over the use of South Korean and Chinese women as wartime sex slaves, Seoul claims there is a sense Japan is attempting to distance itself from the atrocities of the past. (19.06.2014)

This is why the US and Japan are enhancing bilateral ties and seeking to finalize the terms of a deal essential to a 12-nation pact which would exclude China. The free trade deal, known as the Trans Pacific Partnership (TPP), presents an opportunity for the two countries to spread their shared values.

No mention of 'sex slaves'

But this won't be enough to appease the PM's critics. In his speech, Abe ignored the fate of up to 200,000 women who were forced to work as sex slaves by Japan's Imperial Army during the war. Ahead of his US trip, the PM had told the Washington Post his heart "ached" for women he said had been victimized by "human trafficking" and gone through immeasurable pain and suffering beyond description." However, Abe failed to say who was responsible for the "human trafficking."

The Japanese have long used the euphemism "comfort women" to refer to the thousands of Korean and other Asian women forced into prostitution at Japanese military brothels before and during the war. Right-wing historians in Japan claim that these women were neither recruited on behalf of the Japanese army, nor were forced to work in the brothels.

Nevertheless, in 1993, then government spokesman Yohei Kono owned up to the enslavement of women and apologized for this. During a joint press conference with US President Barack Obama Abe declared his support for the so-called "Kono statement" and said he would not alter it.

But during his address to Congress, Abe only referred to statements made by "former prime ministers." Kono was a government spokesperson, an aspect which be me interpreted as a attempt by Abe to distance himself.

This explains why South Korean criticized the speech, arguing that Abe keept intact a much-denounced record he has maintained since taking office: "Never apologizing for the country's wartime sexual slavery," wrote Chang Jae-soon in an opinion piece for the South Korean news agency Yonhap. 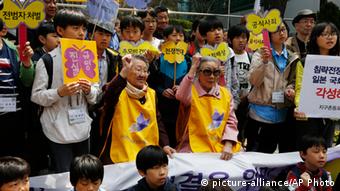 Ahead of Abe's speech, hundreds of ethnic Korean-Americans had protested in front of the US Capitol

Chang also slammed Abe's previous remark on human trafficking: "The selection of the word 'human trafficking,' instead of sexual slavery, was also seen as an attempt to evade Japan's responsibility because the phrase is usually associated with private prostitution." Abe's vague statement on the consequences of the war for neighboring Asian countries contrasted sharply with the strongly apologetic tone about US suffering during the war, he added.

As for China, a foreign ministry spokesman told a regular briefing in Beijing: "China always urges the Japanese government and its leader to adopt a responsible attitude towards history. Only by doing so can Japan truly win the trust of the international community and establish a future-oriented friendly relationship with its Asian neighbors."

'He can wait for us to die out'

A group of US representatives, who had demanded an apology on the issue of sex slaves, also criticized the PM. Michael Makoto Honda, who serves as the US Representative for California, said it was "shocking" and "shameful" that Abe continued to evade his government's responsibility on the issue by not offering an apology.

Ahead of Abe's speech, hundreds of ethnic Korean-Americans had protested in front of the US Capitol and demanded an apology. An 86-year-old "comfort woman" survivor, Yong Soo Lee, attended Abe's speech at the invitation of Congressman Honda. "He can wait for us to die out but that won't erase Japan's crimes," said Yong, who was forced into prostitution in a Japanese brothel at the age of 16.