Japan outlines plans to end nuclear crisis within 9 months | Asia| An in-depth look at news from across the continent | DW | 18.04.2011

The operator of Japan's tsunami-hit Fukushima nuclear power plant intends to completely shutdown the crippled reactors in the next six to nine months. It also plans to sell off assets to compensate affected families. 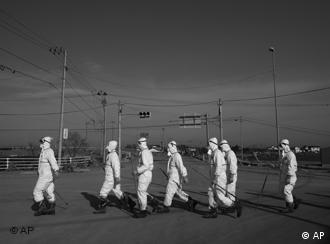 The area around the plant is tainted with radiation

Japan's Tokyo Electric Power (TEPCO) said on Sunday, it was planning to fully shutdown the radiation-leaking Fukushima Daiichi nuclear power plant within the next six to nine months.

TEPCO said the reactors and spent fuel will first be cooled to a stable level, which will take around three months. After the reactors have been stabilized, the Daiichi plant could be shutdown cold within an additional three to six months.

The Daiichi plant has been leaking radiation since an earthquake and tsunami devastated northeast Japan on March 11. Japan had raised the severity of the nuclear crisis to seven on Tuesday, which is the highest level on a scale set by the International Atomic Energy Agency.

That puts Japan's nuclear crisis on par with the Chernobyl accident in the former Soviet Union in the 1980s.

"This is the biggest crisis since the founding of our company," said Tsunehisa Katsumata, TEPCO's chairman. "Getting the nuclear plant under control, and the financial problems associated with that…How we can overcome these problems is a difficult matter."

Katsumata has indicated that he may resign as a result of the Fukushima crisis. 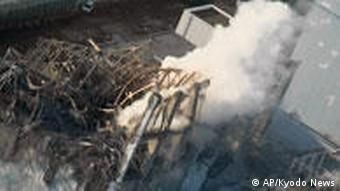 The Fukushima nuclear plant was devastated by the earthquake and tsunami

TEPCO and the Japanese government have come under increasing pressure from residents of the afflicted region, who are calling for clear information on when they will be able to return to their homes.

Prime Minister Naoto Kan created controversy when he reportedly said evacuees would not be able to return for 10 to 20 years. He later denied making those statements.

"We would like to present objective facts to help the government make a judgment and outlook on when those who have been evacuated can return home," TEPCO chairman Katsumata said.

TEPCO is planning to sell off its shares in the telecom operator KDDI - worth 1.5 billion euros ($2.2 billion) - in order to compensate people impacted by the crippled Daiichi plant.

TEPCO plans to give payouts to approximately 50,000 households which will cost around 415 million euros ($595 million).

Meanwhile, US Secretary of State Hillary Clinton has pledged America's full support for Japan during a brief stop in Tokyo on Sunday.

"We will do everything to support you as you come through this time of trial," Clinton said after meeting with Foreign Minister Takeaki Matsumoto. "We know you will emerge even stronger than before."

The US and Japanese business communities also announced plans for deeper cooperation in order to accelerate the island nation's post-disaster reconstruction. The US Chamber of Commerce and Nippon Keidanren - Japan's main business federation - said they will hold discussions on how businesses can help with rebuilding.

"It is in the interest of the American business community to see that the Japanese economic engine is working at peak performance as quickly as possible," said Tom Donohue, the president of the US Chamber of Commerce who accompanied Clinton on her visit.

An estimated 13,705 people have died as a result of Japan's triple disaster with some 14,000 still missing.

The Japanese government continues to expand the evacuation zone around the crippled Fukushima nuclear plants. Tests have shown that some locals have been exposed to high levels of radiation for too long. (15.04.2011)

Japan has raised the accident level at the Fukushima nuclear power plant from five to seven - the worst level on an international scale, on a par with the Chernobyl disaster. (12.04.2011)

While Japan commemorates earthquake and tsunami victims four weeks after the disaster, a 7.1 earthquake damages the power supply to the crippled Fukushima Daiichi plant. Demonstrations against nuclear power are growing. (11.04.2011)